A DISCUSSION ON FELLING TECHNIQUES AND THEIR COUNTERS

A little later than promised.

Suppose while engaged in combat, your opponent exploits an opportunity and throws you using the pattern “Carry Tiger Back to Mountain”. What would you do?

Instead of moving your body forward, shift your body slightly backward and to your right, and simultaneously lift right leg over and beyond his right leg. This is yielding, or neutralizing , and it effectively overcomes his leverage-advantage, with which he throws you. Next, “float” his arms at his elbows. This is deflecting , which not only releases his grip on you but also prevents him from striking you. Then strike his ribs with your left knee. This is countering, often striking him while he is trying to recover his balance due to the unsuccessful movement of his throw.

Picture 1: I attempt to throw Simon using the pattern Carry Tiger Back to Mountain.

Picture 3: Simon parts my arms, preventing me from striking him and then strikes my ribs with his left knee.

I will post a picture sequence for the Shaolin Kung Fu counter in a few days.

“Picture 2: Simon shifts his body slightly backward, whilst simultaneously lifting his right leg over my right leg. Thus neutralizing my leverage advantage.
Picture 3: Simon parts my arms, preventing me from striking him and then strikes my ribs with his left knee.” Looks to me like Simon's "Golden Bells" are in grave danger from Marcus' kicks here. (Laughs)

“Perhaps, Sipak Markus, but would that not involve Sipak Marcus having to shift his weight to his rear leg, allowing Siheng Simon to take the appropriate defensive action?”


In my opinion, this technique unnecessarily exposes Simon. But as Sifu says, no technique is impossible to counter. However, a countering kick ("Santer Rings the Gong" ) to Simon's knee-to-the-ribs would be a relatively fast counter (no-defense-direct-counter), with very little movement or shifting of weight required. Taisiheng Kai, for example, is very, very good with these kinds of kicks.

But I'm a bit off topic here. Let the yielding continue!

Yeniseri
an instructor of another school
9th April 2006

I looked at the last photos and the one to the left is in “mabu”. Tthe response is too static because no one takes horse stance in initiating an aggressive action. The one to the right appears to be taking too many steps to stop the said onslaught. In the 2nd photo a sweep (may be a forward leg to push the said leg backward or in the second frame a kick to the knee) to the forward leg may be in order to curtail the attack.

“In my opinion, this technique unnecessarily exposes Simon.”

I respectfully disagree, my good brother from the north (Smile)

It is true that picture #2 makes it seem like Simon's groin is exposed, but it is just a transition. The actual movement is fast and fluid. If Marcus was to kick Simon at that time, Simon's left leg would already be there to cover.

Unless, of course, Marcus is so much faster or more skillful than Simon. But then it is a matter of skills, not technique or concept.

“no one takes horse stance as in initiating an aggressive action.”

That's a new one to me.
I guess I have a lot of techniques to discard, then (Smile)

Fair enough, Hubert, mon ami . I'm not saying that this technique is no good, just saying that as kungfu techniques go, it seems cumbersome; relatively disadvantageous and easy to counter. I personally wouldn't use it.

Where Simon has to shift his feet to perform his counter, Siheng Marcus only has to slightly shift back out of reach and simultaneously give him a kick - a thrust one or an organ-seeking kick. This counter/attack requires significantly less movement than Simon's counter/attack. Therefore the advantage is with Marcus.

It goes without saying that the speed of execution is a crucial factor in any technique. Fast reaction / movement might turn the tables at any given time. But we're not discussing speed, timing or force here, we're discussing the merits and flaws of this particular technique. 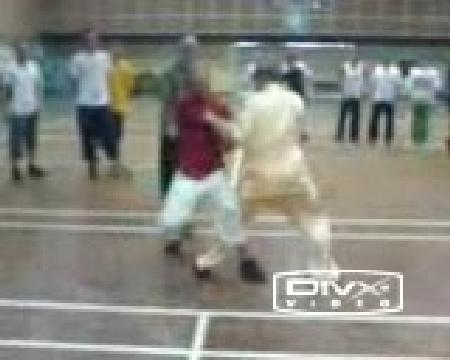 Sifu Wong demonstrates "Lead Horse Back to Stable" on Hubert during a Special Shaolin Kungfu Course in Malaysia. On the far left looking on is Sifu Markus Kahila.

I looked at the last fotos and the one to the left is in mabu, the response is too static becasue no one takes horse stance as in initiating an aggressive action.


The purpose of the pictures is to show how to counter that felling technique.

The Tai Chi pattern “Carry Tiger Back to Mountain” is performed this way and requires a Horse Stance, the same as what Siheng Marcus is doing in picture one, but...

There is a transition stance before the Horse Stance (before picture 1) where Siheng Marcus probably moved into a Bow-Arrow Stance, then he shifted his weight to a Horse Stance to properly perform the felling technique.

It can all happen very fast, so to the uninitiated, a picture or even a real life demonstration of the technique does not always mean that a viewer will understand the underlying principle of it, notice a missing step, or even notice the stance transitions.

That's why it's always best to learn from a Master or at least a competent instructor, and not from a picture, book, or video


Well, it's the same footwork as, say, "Hiding Flower in Sleeve" used to counter "Leading Horse Back to Stable". You remove the leg that is being used as a leverage to fell you. I don't find it cumbersome.

This is why the next deadly confrontation between you and me will end in your bitter defeat! (Smile)

But seriously; you're correct, the footwork is similar. But the two throws which precede the counters are not. In "Leading Horse Back to Stable" the defender is following the momentum of the attacker's throw by employing agile footwork, whereas here the attacker is never "tricked" into continuing his throw but instead just having his target removed. There's more time to react. Therefore, the footwork here is tactically slower than in the example of "hiding flowers in sleeves" against "leading the horse back to stable".