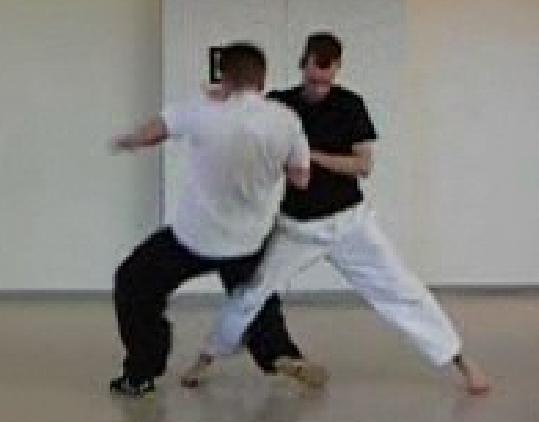 This lively discussion inspired myself and Tapio Raevaara to go and have some fun with the much debated technique performed originally by Mark and Simon. We also filmed some clips for your viewing pleasure.

Sifu Markus yields to Tapio's push and instantaneously throws him to the ground in less than a second. Please click here to view the video.

Tapio Raevaara yields to Sifu Markus' push and instantaneously throws him to the ground in less than a second. Please click here to view the video.

In our opinion, there's no reason this technique couldn't be performed in the time frame of one second. Counting from the time the push is performed, to the moment when the attacker touches the ground, my performance here is around about 1.2 seconds, and Tapio did it in 1.3 (not bad for someone with just 4 months of practice in Shaolin Kungfu!). Please note that we purposefully softened the fall by taking our time. Tapio hadn't learned safe break-fall until this session, so there was good reason to take it easy.

Another point I'd like to mention is that we filmed this clip before either of us saw Siheng Anthony's second clip. This is our interpretation of the technique in question, based on the original images. After the second clip was posted, there's been a lot of discussion concerning the placement of the feet and the number of movements, but I think before thinking about what steps are taken one should first consider what the technique is meant for. In this particular yielding-felling technique, any extra steps would be just that - extra steps with no particular purpose.

I sincerely wish that this clip will help to advance understanding of Siheng Anthony's clips in relation to the original images, and perhaps even inspire some to have some fun with your kungfu training!

Let me know what you think.

P.S. These files are in .avi -format - playing them with windows media player may result in an ultra-fast viewing experience. Although this looks cool, we're not that fast (yet).

I see what you mean about picture #4, however I think that Anthony's performance of the technique is simply better than Simon's (sorry Sehing - you are still many years better than me.)

If you can throw your opponent without taking an extra step, and you can - I have direct experience of this (being thrown with this technique that is ) and I have seen it performed live - then why take the extra step? If your throw is good enough you can control where your opponent lands, without needing to adjust. But then I'm sure you already know this.

Unfortunately it will be a long time before my throws are that good.

Sifu Wong releases a Tiger-Claw grip with a BIG movement. Notice that size is not a decisive factor in kungfu.

Hey Markus, great videos! I personally like the windows super fast version And congratulations to Tapio, very good for only 4 months experience.

I'd just like to finish posting for today by offering 2 more picture sequences based on this from post#91 (on this thread):

If someone uses both his hands to grip your arm at your elbow and wrist, for example, an effective counter is the big movement of "Immortal Waves Sleeves" or "peng". In Shaolin Kungfu, the pattern is "Beauty Looks at Mirror", and in this case must be performed in a big movement. In fact, it is the big movement that implements the continuous process of yielding, deflecting and countering.

If the movement is reduced in size, it will not be effective. Any Shaolin Wahnam students, including new ones, who have direct experience of using the above techniques in their sparring will know that big movements can be effectively used for combat.”


Picture A: Tai Chee Yong grips Sifu right wrist with a tiger-claw. Sifu relaxes his arm and using his shoulder as pivot, turn's his arm in a clockwise direction, simultaneously rotating his waist

Picture B. This turning will cause Tai to release his grip; otherwise it will dislocate his wrist. Note this is a BIG movement.

Picture 1: Simon grips my arm with both of his hands, at my elbow and wrist Picture 2: I respond using the Shaolin pattern “Beauty Looks In Mirro”. Notice again this is a BIG movement, travelling in an arc from Simons mid thigh, to his face.

I'm work all day tomorrow, so either in the evening, or on Tuesday morning, though Ollie has a hospital appointment, so it might have to be Tuesday evening I will start the topic of Yielding and Kicks! I am very excited as I wonder where this NEW material will take us

Sifu Marcus uses a BIG movement to release Simon's grip on his arm. The examples of using big movements are given here to refute Challenger's contention that as one progresses in his training he has to reduce the size of his movements for combat purposes.