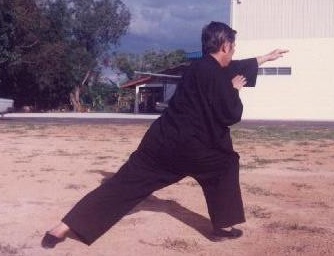 The same set performed by another person will have different benefits.

Back in post 91 of this thread we learned that some schools advocate modifying sets in order to make them easier for beginners to perform. The approach taken by Shaolin Wahnam is different.

Quote
"To us, the same set can be performed by beginners and masters alike, and each benefits according to his level of attainment as well as other factors like needs and purposes.

Similarly in Wahnam Tai Chi Chuan, a new student may perform the basic set "Cloud Hands" to learn correct forms and movement, whereas an intermediate student can use it to develop internal force and practice combat application. A master can use the same set to attain mind expansion or return to God."


If you watch the video at this link you will note that the young person in yellow is performing "Lohan Asks the Way" set and has a powerful chi flow at the end of the set.

The next video shows my elder Kung Fu brother Anthony performing the same set. Clearly each benefits according to his level of attainment.

Later today I will make another post showing a simple example of a big movement being used in combat. Until then....

Beginners at a regional course performing "Lohan Asks the Way". Please click the image to view.

Because the main defence for 'Carry Tiger Back to Mountain' is to move the back foot backward , then sink the hips. The pattern is called 'Black Bear Sink Hips'.

Had Simon moved his back foot forward (in the picture the back foot happens to be his left foot), he would have helped the opponent execute his defence.

Had Simon done that (move the left foot forward) all his opponent have to do is just sinking his hips in order to fell Simon to the ground. (of course still maintaining the hold by his hands)

I have to agree with Challenger. The 4th picture and the end of Anthony's 2nd video are NOT the same. From picture 3 to picture 4 the stance moves, not just a pivot or a change of weight distribution. Perhaps it moves after the person is already on the ground to close the gap?

Simon's back (left) leg does not move towards the park bench. What you gentlement seem to be reacting to is the fact that the right leg of the person being thrown (Mark) gets uprooted. This is understandable since the name of the pattern is "Uprooting Tree." Mark's leg moves, not Simon's.

If you assume that Marks' right foot is still where it started, then I can see your confusion. But why would you make this assumption? Mark has just been uprooted. His leg, and his whole body, have moved. He has just been thrown to the ground! Furthermore, if Simon had stepped his left leg towards the park bench (or west, if Mark is to the north), then he would not have been able to throw Mark. As Joko mentioned, that step would be self-defeating for Simon because it is essentially a counter to his own technique.

As someone mentioned earlier, I think you gentlemen are trying very hard to add extra steps to the photos. The photos, and the technique, are quite simple. Why not just keep them that way?

This post contains links to the photos, and the videos, if anyone doesn't feel like searching: http://www.wongkiewkit.com/forum/showpost.php?p=36092&postcount=265 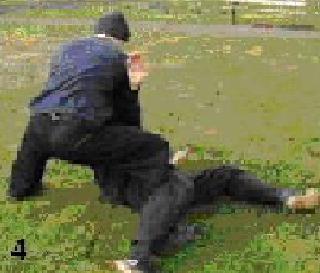 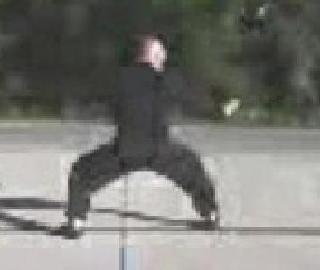 Is Simon's extra step, if any, found in Anthony's technique?

I find it fascinating that you think someone with many years of martial arts experience...and expertise...would be so easily deceived by bogus explanations which are clearly refuted by the photographic evidence! I'm not blind, and I'm not stupid, as you apparently assume in typically condescending fashion.

The explanation of executing the takedown shown in Photo #4 by rotating the body trunk and shifting the weight leftward in the stance of Photo#3, without taking an additional step forward, is a plausible possibility for performing the technique selected, but the photographic evidence does not support this explanation. If that is how the takedown was executed, Simon's body would end facing almost 180 degrees away from the park bench in the background, mostly facing the opposite direction from the previous frames. The photo clearly shows that it does not, but instead still faces this bench! True...he does finish facing his left foot, but in the same compass direction approximately as before, towards the bench, not away from it. This is only possible if the left foot stepped forward at the end. Viewers don't have to be an Einstein to figure this out!

Additionally the relative position of the left foot to his own right foot in the first three frames would remain essentially the same if the left foot had not moved with a step. Again, the photgraphic evidence refutes the allegation that his left foot only rotated in place, but did not step. Also, if this is how the technique was performed, and is supposed to be performed, why do your videos show you still facing your forward right foot instead of your rear left foot? And even with this latest round of bogus explanations, there are four (4) weight transfers...forward to assume the defense ready stance, backward to yield and neutralize, reposition of leading right foot from inside attacker's leg to outside attacker's leg, and backward to left leg to execute the takedown. So...no matter how you explain it, there is at least one missing step in your videos, which is why they do not accurately demonstrate what you claimed they would to prove your boast.