Thanks for providing the sequence.

To which side can Simon move diagonally? Can he do it either to the left or right?' As you are punching with a left jab, is it also possible for Simon to move diagonally to the right, and then kick with his left leg? (and left side kick perhaps, instead of thrust kick). Or if he moves to the left, he kicks with his right leg. Which one is better?

And also can this be categorized as yielding or “no defence direct counter”? 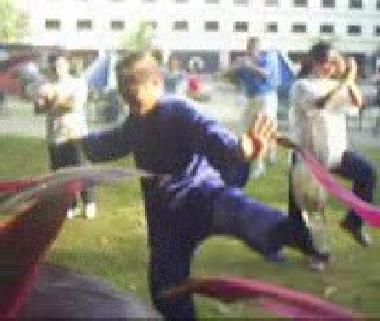 As I have little combat experience I can really only talk about yielding in other than combat situations. I think Piers comments raise some interesting points:

“So my understanding of yielding is that, broadly speaking, it's giving way to an attack so as ultimately to gain an advantage.”

One possible intention is:

“a soft answer turneth away wrath”


One interpretation of the intention being to turn away wrath

“Or, sidestepping someone who's charging at you so they hurt themselves with their own force.”


One interpretation of the intention being that the other hurts himself.

Other intentions might be to avoid harm to oneself, to allow someone space to express their aggression without anyone getting hurt, to give the other person space to learn a lesson (that "lesson" might be one you want to teach them or one they discover unexpectedly i.e. without you or them having any prior understanding of what it might be).

I am looking at yielding from the perspective of the way I run groups, which includes some profoundly disturbed people. This thread has helped me to look at the way I "yield" in these groups and the various intentions there might be behind it.

My intentions, which I notice before, and then try to let go are "to do no harm" and "to do good". So, when someone begins to self-harm in the group, which is often a despairing way of trying to express some aspect of themselves they can't cope with, how should I yield - neutralize the possible harmful impact on them, others or myself and help the energy contained in that act to be useful. When someone fears that another dislikes them, in a way that leads to panic and a desire to flee from the room how do I yield to achieve the same end. For me it is useful to know what my intention is. I practice various ways of being and see what moves towards the aim and what moves away from the aim.

However, I also realize that there is a potential danger in me having any intention of doing good. It possibly introduces my notion of what is good and bad into the group. As time goes on I realize more and more that if I spend my time only directing people towards behaviour, attitudes, beliefs and interpersonal interactions that I deem "good" I take away their possibility to express themselves and learn. So, I also need to yield to a process I don't understand. I know that when I go in with the intention of manifesting compassion and wisdom in the group, and then let it go, people seem to get things out of them. It then just becomes intention and letting go, which I seem as a form of yielding. Intention then becomes the key thing.

Piers, I have been really enjoying your posts lately.

In picture 1 as Simon has his weight (apparently) distributed evenly on both feet then he can move diagonally to the left or to the right. Because the technique emphasizes spacing then in this specific situation it doesn't really matter whether Simon moves to the left, to the right, kicks with the left leg or the right leg.

The second technique used in the description is “Signal High, Strike Low” (not adequately demonstrated in this picture sequence). Personally I'd use an organ seeking kick like Yellow Bird.

The key strategies in this sequence are spacing and Signal High Strike Low.

I will post the sequence for "warding off" a fast jab later this evening after my practice.