COUNTER AGAINST THE PULL 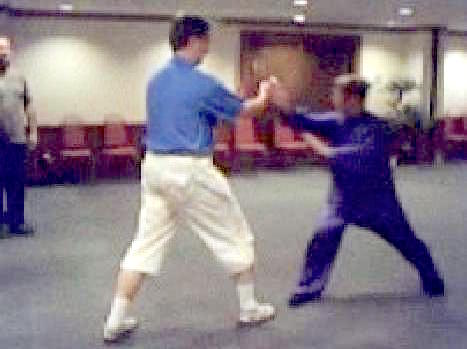 Size is not an important issue in Taijiquan or Shaolin Kungfu. Andy is much bigger in size than Sifu Wong, jet Sifu Wong can throw Andy about easily

Counter to being PULLED

"If they choose to pull you...let them do so, and push them backward to stumble over some obstacle on the ground or into something solid."


I found this technique to be disadvantageous and potentially dangerous, should the opponent pull the Challenger to fall onto the “obstacle” or “into something solid”. My counter to this situation was as follows:

"As the opponent pulls, follow his momentum and respond with 'Cross Hands Thrust Kick' to his chest (called 'White Horse Presents Hoof' in Shaolin Kungfu.)"

Simon and Mark demonstrating a counter against the Pull

In picture 1, Simon (on the left) has grabbed Mark by the wrists and is pulling him forward.

Picture 2 and 3: Mark follows Simon's momentum and responds with White Horse Presents Hoof (or Cross hands Thrust Kick). This pattern also breaks Simons grip on Mark's wrists and prevents Simon from pulling Mark any further (or if Simon should “stumble over some obstacle” he won't take Mark with him).

Picture 4: Mark follows up with a Tiger Claw to the face.

I plan to post a few more pictures to illustrate some of the counters and principals I have shared so far in this thread. Then I plan to take this topic into new dimensions. So as to fulfil my original purpose of this thread, that of bringing forum members understanding of this very important subject to a higher level.

I plan to start with “Yielding to counter Kicks”, stay tuned!

Challenger
a grandmaster of another school
16th March 2006

I would never pull or push anyone as depicted in your photo, so your example and comments thereof are totally irrelevant! These are just further exercises of intellectual conjecture regarding hypothetical situations. And...your examples continue to reflect 'linear' thinking, with direct contests of technique and strength, which is more typical of 'external' rather than 'internal' martial arts.

That's not my way of doing things, but to each their own!

"I would never pull or push anyone as depicted in your photo, so your example and comments thereof are totally irrelevant!"

Seems to me that it doesn't matter how you yourself would or would not push or pull someone, but rather how an attacker might push or pull you. Marcus' examples show pretty common ways of being pulled or pushed on the street. Therefore, his counters seem pretty relevant to me.

"... your examples continue to reflect 'linear' thinking, with direct contests of technique and strength ..."

Contests of strength? Really? Both of the techniques Marcus showed could be done by a small-sized woman against a large man. How is that a contest of strength?

"... which is more typical of 'external' rather than 'internal' martial arts ..."

Challenger
a grandmaster of another school
16th March 2006

As stated previously, your examples are not typical of the techniques taught by Sifu Yang Shao-Hou as responses to these actions from an opponent, and are therefore not what I was taught, and not the way I respond. However, I nonetheless honor your right to choose whatever strategies and techniques you prefer and deem most effective. By your leave, I shall continue to do the same. Different strokes for different folks! That's cool.

I'm not surprised to see that your interpretation of Tai-Chi Chuan principles is different than what is taught in my system, since the source of Tai-Chi Chuan material in each of our schools is quite different. And...since I can readily demonstrate many different applications of every Form in the Set, I acknowledge that there is more than one way of using every technique, and more than one technique that could be used to neutralize and counter any attack. It's all good by degree. No problem.

As also stated in a previous post, it is neither my responsibility nor my place to correct and refine your Tai-Chi Chuan. That is for your Master to address if and when he chooses as most appropriate to do so. All good things come to those who wait patiently! 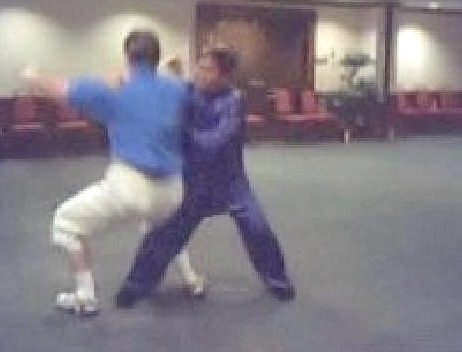 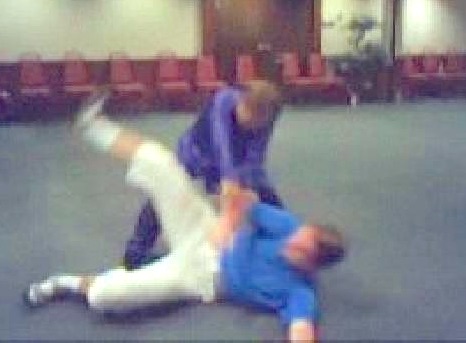 Sifu Wong applies the Taijiquan pattern, “Carry Tiger Back to Mountain” to throw Andy onto the ground at the Intensive Taijiquan Course of January 2006

It's good to see that you are still posting here (Smile)

If I'm not mistaken, I think Siheng Marcus was showing Shaolin Kung Fu applications, so of course they would not necessarily be the same as what a Tai Chi Chuan exponent would use. I think the counter by the defender depends on many things. For example are you planning on seriously hurting the attacker? Do you just want to drop him on the ground to show him that you are more skilled?

If a person was holding both my arms and pulling me forward, I would move with his pulling momentum and push him to the ground. Or if he has lots of force in his grips, I would sink back a bit, and use a circular (Clouds Hands) movement to free both arms, then simultaneously push him to the ground. If the intention was to hurt or kill him, then after releasing the grip, "White Snake Shots Venom" to the throat would work nicely.

I'm only a beginner and I'm learning a lot from the discussions on this thread. I have a lot to learn. Thanks to everyone who have participated.

I apologize I've missed reading some of the posts from the last few days, so I'm replying to this now.

We did learn the felling technique with Sifu during the recent Intensive Tai Chi Chuan course. I've found it to be very effective against students of my (low) level after coming back home. Actually it was just last Monday that I used it to drop any student who I tried it with.

A few weeks ago my teacher here asked me to try any movement against him during push hands. I tried it on him but I was the one on the floor....hehe, he is obviously much higher level than me.

I believe with daily practice, say for 6 months, this technique can be used to drop even a skilled fighter on the ground. I could be wrong about this but (all things being equal) I think WahNam Kung Fu students would perform this particular pattern better, faster, and with more stability than WahNam Tai Chi Chuan students. The reason is because Kung Fu students spend much more time practicing Horse Stance, and when sinking to use this felling technique, you are basically on a horse stance. This is only my view, and I could be wrong.

Sifu kindly demonstrated and taught the counter for this, and he easily dropped me and others to the ground. He was very gentle with us, and said "Don't worry, soft landing!" (Laugh)

I don't want to know what would happen if Sifu used more force especially against someone who doesn't know how to fall correctly, the impact of hitting the floor might on it's own can cause an injury or a K.O!