THE MARK OF A MASTER

Way back in Post I quoted the following from a challenger

'If they choose to charge forward...let them do so, and pull them face first into the wall or some other unmoving, solid object'.


I replied with this “alternative” approach to responding to a rushing or pushing attack:

Quote: “As the opponent pushes, first neutralize (or yield) to his push, then redirecting his momentum throw him onto the ground with 'Carry Tiger Back to Mountain' (called 'Felling Tree with Roots' in Shaolin Kungfu.)”


I'd like to thank Simon Brooks and Mark Tranter for kindly agreeing to taking these photo's at short notice (yesterday!) in order to demonstrate the principle.

Picture 1: Mark (on the right) is pushing Simon (on the left).

Picture 2: Simon Yields to Marks push by transferring his weight without moving his feet and uses his right arm to redirect Marks pushing momentum.

Picture 4: Simon throws Mark to the floor using Carry Tiger back to Mountain (or Felling Tree at Roots in Shaolin Kung Fu).

“If they choose to pull you...let them do so, and push them backward to stumble over some obstacle on the ground or into something solid.”

__________________
Shaolin Wahnam — London
Take back responsibility for your health and well being
Visit us at http://www.shaolinwahnam.co.uk

Challenger
a grandmaster of another school
14th March 2006

Re: Your Photo Technique

A mostly double weighted defender, making what appears to be four weight transfers...i.e. forward to initially contact the pusher, backward to yield and neutralize, withdraw lead foot from inside the pusher's leg and reposition it outside his leg with a forward step, ending with another forward step to perform the takedown, at least three steps, and all on the assumption that the attacker will only succeed in making one forward step and one assault.

Wouldn't it be just perfect if we always had enough time and space to do all of that? And every assailant only took one step and threw only one punch? Unfortunately, in the real world where real fighting takes place, your hypothetical scenario adds up as: too many weight transfers + too many steps + nebulous stance and footwork + either too little time or space in which do these + too many dangerous assumptions = too slow to pull off against superior speed + too many potential vulnerabilities = doubtful outcome. Looks great on the drawing board, but not likely to succeed on the street or in the ring.

The Mark of a Master

Thanks for your response, “A Challenger”.

Perhaps you haven't tried the technique shown in the picture. Please try it and tell us what happened. 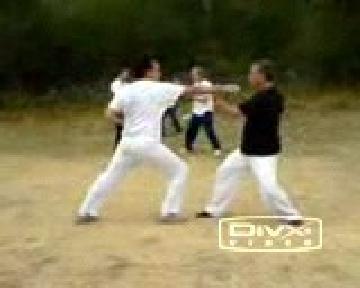 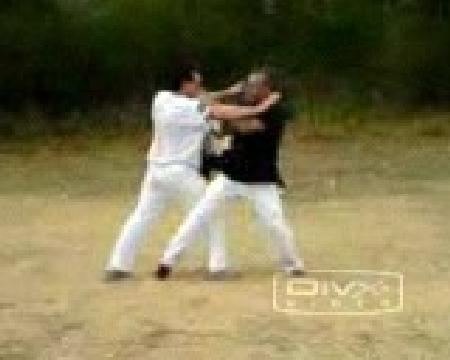 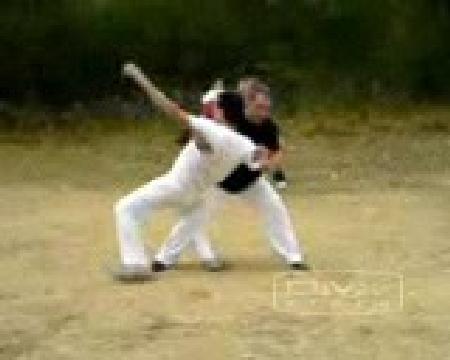 Carlos of Shaolin Wahnam felling an opponent at a regional Wahnam Taijiquan course in Soria, Spain in August 2005. You can see a video clip here showing course participants who are mostly beginners felling opponents in about 3 seconds.

In the pictures, as Mark pushes (Picture 1), following his momentum Simon yields (Picture 2), deflects (Picture 3) and counters (Picture 4), all in one smooth movement.

Fresh beginners would take 3 or more seconds to complete the technique. As they would be hesitant at first, and not able to do the technique in one movement, their training partners would have to co-operate and freeze their attack to allow the defenders to practice the counter.

After a few practice sessions, even for beginners they would be able to apply the counter in less than 3 seconds. They would do it in one continuous movement though the flow might not be smooth yet. At this intermediate stage, their training partners would still have to co-operate.

At the advanced stage of the training session, even for beginners they would be able to implement this technique in a second, which is about the time the attacker completes his initial attack and begins to recover from his initial move. At first the training partners still co-operate, but when the practitioners are quite skilful, co-operation is gradually withdrawn. Later the training partners will counter this counter. This is part of the systematic training in combat application in Shaolin Wahnam.

This technique brings to life the two famous kungfu principles which are of particular importance in Tai Chi Chuan, namely “Using the opponent's momentum against himself” and “Starting later arriving earlier”.

In fact I intend to show the counter to this counter in a later post. These are not advanced techniques. They are in our basic combat training programme in both our Wahnam Tai Chi Chuan and Shaolin Kungfu. Those who attend the England Summer Camp in July this year will learn and practice this technique, and you can discover from your own direct experience that you can implement this technique successfully in one or two seconds.

But if you are too impatient to wait till the England Summer Camp or my explanation of the counter later on, you can search our websites for examples. There are quite a lot of them in pictures as well as video clips.

Here, we are talking about techniques. We need to differentiate between techniques and skills , a difference we often emphasize in Shaolin Wahnam though other schools may not pay much attention to the difference.

For example, if I attempt to throw Sifu (Sifu Wong) using “Carrying Tiger Back to Mountain” (or “Uprooting Tree” in Shaolin Kungfu), I would find myself being thrown to the ground instead. In fact, this has happened many times. After students to his intensive courses or regional classes had learnt this technique well, he would ask one of them to try it on him, He asks them to “Really throw me.” and when the student expected to find Sifu on the ground, he found himself on the ground instead! It is an inspiring experience. It awes us to the beauty of Wahnam Tai Chi Chuan and Shaolin Kungfu.

I invite anyone who has had such an experience to share it here with us.

Sifu can throw us even when we know what he is going to do. I remember him saying:

“This is the mark of a master. You may know what technique he is going to use, and you may also know its counter. Yet, he can still defeat you using that very technique.”

I will post the "PULL" picture series in a few days time.

__________________
Shaolin Wahnam — London
Take back responsibility for your health and well being
Visit us at http://www.shaolinwahnam.co.uk