MEANINGFUL FLOW OF ENERGY IN SHAOLIN KUNGFU AND WAHNAM TAIJIQUAN 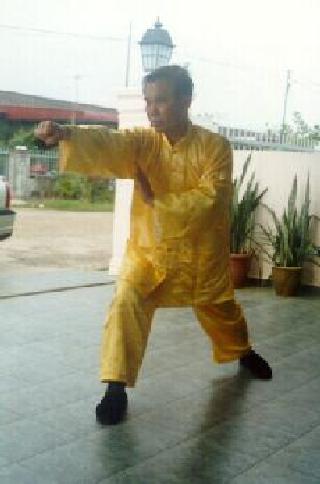 In the photos and videos I've seen on this post, all the actions are being done simply with timing/weight shifting. Merely following a technique in a blending, smooth, graceful, etc way to neutralize the attacking force, allowing you to take the advantage can be done with timing, without actually yielding!

If the attacker was suspended and he was "sticking" to you, he would follow your timing action to a point structurally you would either crumble or at that point you may learn to yield. (much pain in the legs at that point, while breaking through)

In order to yield one needs to empty oneself... then your centre will drop naturally under the attacker's centre... then the attacker can be moved without trying to do anything. This principle can be applied without contact... empty force.

Out of curiosity, where does your concept of yielding come from?

I'm still not sure that I understand your explanation, but if I read you right, you're basically saying that what Marcus and I are showing/explaining is not yielding -- at least not according to your definition of yielding. You mention that if your opponent "sticks" to you, then you would get to a point where your structure would crumble. With this point, I certainly disagree.

If your opponent presses further (pressing attack), or "sticks" to you, then you simply yield further. You can do this in many ways -- by brining your front leg backwards into a False Leg stance, or even further behind the front leg. All of this happens smoothly in one move, not in several moves.

You also mention "empty force." Again, you may have a different concept of the term, but the words "empty force" are usually used to describe striking someone (using energy) without touching them. This is completely unrelated to my concept of yielding. I recognize, however, that you may be talking about something completely different.

Sifu Wong taught me not to mystify things. When I read his words, I know instantly what he means. I do not need to reread them in order to grasp the concept. Thankfully, Sifu has taught me to do the same, both with my teaching and my writing. When I teach, I don't try to cloud concepts behind an intellectual veil, and my students have told me that they appreciate my no-nonsense style of teaching.

I think this applies especially to potentially confusing topics, like yielding. A line like "any movement comes from stillness, keeping in one" is unclear without a subsequent explanation. Frankly, it sounds to me like someone quoting from the classics without any direct experience of the meaning. Sadly, this is all too common today, even among masters.

This brings up an interesting topic, and one that I think is important: Discerning Real from False in Writing . I've created a new thread on the subject so as not to distract things here.

It is my belief that in order to fulfill the first step of yielding and neutralize an attack, it is necessary to avoid meeting force with force. Sinking back out of the way, stepping to the side or even forwards (at an appropriate angle), turning the waist, and redirecting the force of the attack are all ways of neutralizing an incoming attack, whether it be a punch, kick or whatever. All of these means may be applied in various ways depending on the skill of the exponent and the individual situation arising.

If we practise Shaolin Kungfu or Wahnam Taijiquan, our movements are a meaningful flow of energy, not just body dynamics. They are also a meaningful flow of mind. We may perceive an opponent (including their attack) at the levels of body, energy and mind. It is my belief that our response may become more subtle (and less visible to the onlooker) when working more deeply as energy and mind, whilst still being effective to neutralize incoming intent manifested as force.

To my understanding, energy and mind are not "contained" by a body, but flow freely beyond this perceived boundary. In this way we can sense the energy and mind of ourselves, our environment and our opponent. When I practice our Chi Kung or Shaolin Kungfu, it is by letting go my ‘self' that consciousness expands. When this helps us to sense an opponent better, we can yield (and flow) more concisely to their attack, adding depth to our skill.

Now we can look at this neutralized attack from the attacker's point of view. They made their attack and the original target was no longer there in the sense of receiving an oncoming blow. Had the attacker followed the energy or intent of the defender as they moved to neutralize the blow, the attack would have been successful. Hence my earlier use of:

“The opponent has yielded so that the attacker has 'lost' them. They cannot be found in body or mind and the attack is successfully neutralized.”

The quote above, from your post (#121) tells me that you yourself do indeed ‘listen' to your opponents' energy and mind. You gave the example how you respond to their attack, shifting the target backwards ‘at the golden moment'. In order to get ‘right timing' and ‘right spacing' you have sensed your opponent well. 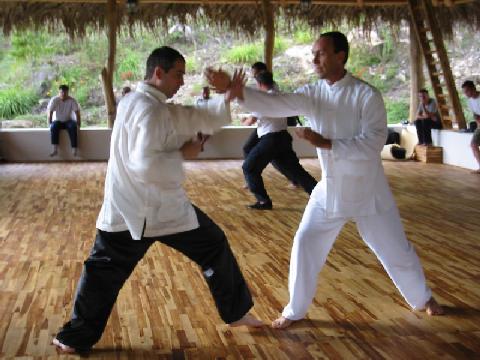 As I said, I think that many people can benefit from a clear and open discussion about yielding. Your last explanation clarified many things for me. I thank you for that. To me, your previous explanation was obtuse and impenetrable. The recent explanation was clear and direct. The difference between the two is like day and night.

Imagine if, instead of saying "Stand upright and relaxed," Sifu said, "Reach toward Heaven with The Hundred Meetings and Let What Is Be." That would be obtuse. Similarly, when Sifu talks about yielding, he is characteristically Zen, i.e. simple, direct, and effective.

Words are extremely limited, but we must do our best. A topic like yielding is tricky. I think most of us appreciate that words alone can never fully capture the concept of yielding. But if we are going to use words, then I think we must make efforts to be as clear as possible, just as our Sifu did in his books and continues to do on his website.