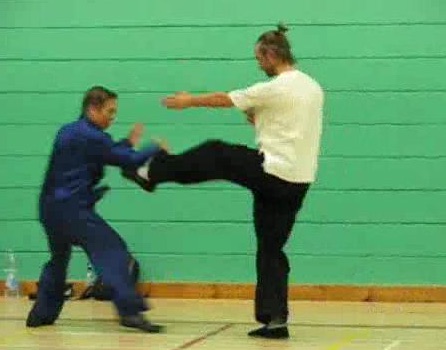 I have been reading your posts for some time, and they have been very interesting, thank you.

I have a question about tai chi chuan forms; why are many of the movements only practiced on one side? I asked a teacher (who teaches tai chi for health, not fighting) who said that the body's internal organs were not arranged symetrically, and the tai chi form reflected that.

In a fight wouldn't it be a problem if you had only practiced a particular pattern one way?

Thanks and all the best,
Dod

From what I have been taught, I would have to disagree with the advice given to you by that Taijiquan teacher.

Yes, when you practise, for example, the Yang Style short form, There are certain moves that are only done on the one side. However, once we get the form right, we are encouraged to practise the form the opposite way around as well. A mirror of the form. In the long form, all the movements are repeated to both sides several times anyway. Does that teacher just practise the short form?

I think that whether you practise for just health reasons or just for combat, or both. It is important to train yourself to be comfortable performing any of the patterns using either side of the body.

I would say that in the case of combat. It would be a great dissadvantage to only be able to use one side for each move. If I can only perform Green Dragon to one side, it will be useless if the attack comes from the side I haven't trained against.

In the case of health, I would say that it is important to train each side of the body equally too. For example, surely it is not a good thing for your right leg to be much stronger than your left leg. This will cause imbalance in your body. I would say that it might even effect your posture over a long period of time.

These are just my opinions. I am just a student. However, it just doesn't make sense to me to practise any move only on one side in any Martial Art.

p.s. I hope the Wahnam students/instructors can give their opinions on this topic. I will be very interested to read what they have to say. If they agree with me I'm sure they will word it better anyway ;).

It's a good question. Unfortunately, it's a long answer.

Kungfu sets of many styles often have techniques performed only on one side, i.e. only with the right-hand mode or the left-hand mode. There are several reasons for this, and it depends largely on the set and the style. I'll speak in general about Kungfu sets since I am not a Taijiquan expert.

The techniques in Kungfu sets are arranged in a specific way for different reasons, or a combination of these reasons. Some are arranged for easy remembering, others for combat application, others for force training, and still others for training special skills. Most sets combine a couple of these. 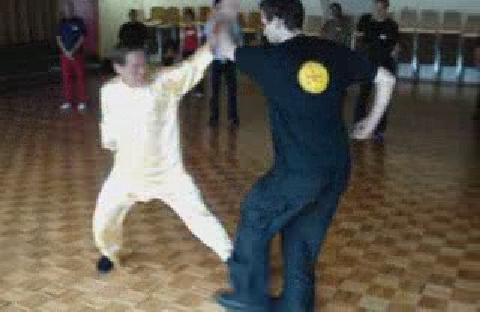 In Shaolin Kungfu the left hand is often used for defence, as demonstrated here by Grandmaster Wong and George during sparring.

In some short sets, techniques are performed only once, obviously on just one side. Many of these sets are arranged for remembering and preserving the techniques for posterity. Repeating techniques on both sides becomes redundant and is deemed unnecessary. All of the important ingredients are contained within the set if someone chooses to extract them to practice on the left side.

However, contrary to what might seem logical, this may or may not be necessary. Many techniques need not be practiced ambidextrously. Just like a standard boxer uses his left to jab and his right to cross, Kungfu fighters often develop a “strong” side.

For example, in our set Crossroads at Four Gates, all of the patterns except one are performed only on one side (though some are repeated on the same side). In this set, the right-hand mode (right leg forward) is favored over left. Furthermore, during much of the set, the right hand uses a fist while the left uses a snake palm.

It might seem logical to extract all of the moves and practice them ambidextrously, but this is not necessarily helpful, especially for combat. Why? Obviously, opponents can attack with either their left or right leg forward (standard or “southpaw”), but that doesn't mean you need to change sides. If a boxer who is only comfortable fighting in standard switches his stance in order to fight a southpaw, he's sure to lose.

So he should practice both sides, right? Wrong. If a boxer spends equal time on both sides, he has just doubled the number of techniques to practice and (unless he practices twice as much) cut the skill level of each one in half. 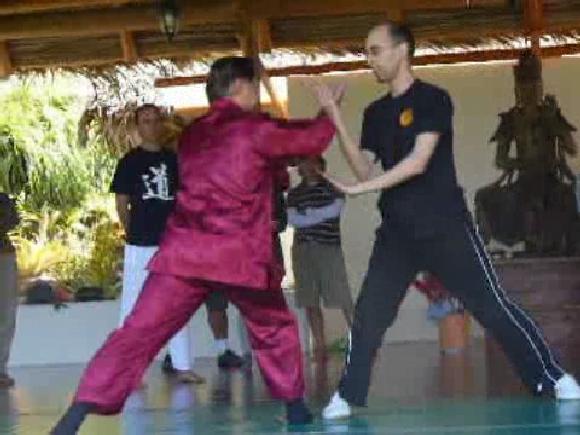 Sifu Joan Browne makes an interesting comment that a noticable difference between the four abridged combat sequences of Shaolin Kungfu and Wahnam Taijiquan is that the right hand is more frequently used in Taijiquan combat, like demonstrated here by Grandmaster Wong and Sifu Hubert Razack

One of the reasons why boxing is effective is because they focus on skills rather than techniques. There are really only 4 techniques in Western Boxing — jab, cross, uppercut, hook. That's it. The rest is all variation and skill.

Kungfu uses more techniques, but like boxing, it still focuses on skills. Furthermore, Kungfu fighters are encouraged to develop their strengths and acknowledge their weaknesses. For most of us, our right hand is stronger than the left. To pretend otherwise is to be foolish.

Ideally, sets like Crossroads at Four Gates are for right-handed people. This set works to maximize the natural strength of the right hand. Since the left hand has less strength, the set instead uses techniques that rely more on internal force for the left, like Snake strikes.

Later, once you have mastered the set on one side, you can mirror it to practice the other side if you like, but if you have really gone deep into the techniques, this is usually unnecessary. You just don't need every technique on both sides. It is better to have one side that is strong than to have two sides that are mediocre.

I'm not sure about the health aspects, but the “internal organs” argument sounds weak to me. The organs are indeed asymetrical, but I have never seen any asymetrical qigong. Dynamic qigong patterns often go to one side, but then they also go to the other side. I don't see how Taiji for health would be any different. Taijiquan forms were originally created for combat, not health. If anything, the Yang form may have been rearranged to include both sides precisely for health purposes.

Reproduced from the thread one-sided forms? started in the Shaolin Wahnam Discussion Forum on 26th June 2003.