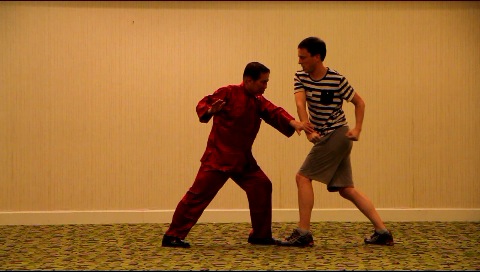 The Tai Chi Chuan Festival in St Petersburg was amazing. Epic in its scope and magnificent in its execution, to be a part of it was a real honor and a privilege. I suspect it was unprecedented in the history of Tai Chi Chuan to learn what we did in such a short space of time. Let me tell you, it is inspiring to be part of history.

And we didn't just learn sets -- Sigung transmitted the very essence of each style of Tai Chi Chuan by pausing at certain moments through the set to emphasis and elucidate aspects of the patterns he had just taught us. Sometimes we paused for combat applications, other times for philosophical discussions; sometimes we paused to practice the patterns with our total focus on the Jing, Chi and Shen level.

The Yang 108 pattern was poetry in motion: soft, flowing and smooth. I felt light and spiritually fulfilled as I moved through the patterns. I felt confident and focused as I trained combat with it.

Before I comment on the Flowing Water Flowing Clouds set I must state an obvious point -- my words are not a statement on the nature of the set but rather a statement of my personal experience of practicing it: I found the Flowing Water Floating Clouds set more powerful than Iron Wire. It set my meridians on fire as surely as lighter fluid would. My Shen was glowing in that room and I felt a freedom in my soul like never before.

Learning the Wudang set was like opening a letter from God. There is a mesmerizing beauty in the set that whispers to the eternal in all of us. It is the very source of all our Tai Chi Chuan -- the very source! Watching Sigung practice it is to witness something very precious and very beautiful and the privilege of being there to learn it was immense.

Some of the combat applications of the Wudang patterns were outstanding. Really, I never would have guessed. I learned so much, yet we only barely scratched the surface of it.

We enjoyed some tremendous combat on all four afternoons. On the third evening (after Floating Water Floating Clouds) Sigung asked us to practice combat sequence seven against boxers and other martial artists. Again and again, Sigung emphasized with great clarity how we are to use our combat sequences in combat: we use the sequence as a sequence -- we do not break it up into its constituent parts. It is a self-contained unit of attack all by itself!

We strike with a punch and without a moment's hesitation or pause we strike with the second punch. Then we kick. Then we strike again. As we apply the sequence we continuously and relentlessly press into our opponent (and by pressing correctly, naturally we guard correctly). We repeat and repeat the sequence -- without relenting in our pressing -- until our opponent has his or her back against the wall or is on the ground. As a methodology in combat it is quite stunning in its effectiveness. It is the very essence of how we are to train our sequences and fight in free sparring competitions.

I found that when we apply our sequences in this correct manner we completely overwhelm our opponent. As a foundation we must of course have picture perfect form and reasonable levels of force (to be effective in pressing). We must also have the courage and confidence to follow through and banish our emotional insecurities. But when these ingredients are present and we train our sequence in this manner -- as instructed to us by our Grandmaster -- we make the transition from kittens to tigers. 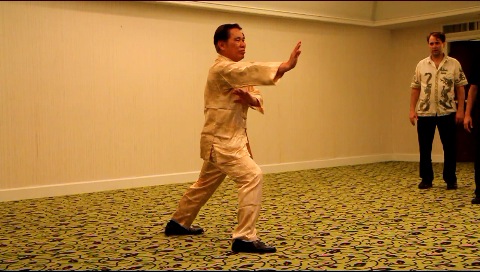 Grandmaster Wong explains how to fa-jing or explode force

I had many tremendous sparring sessions that evening but the one that stands out is the one with Chris Sifu in which I had my "I get it!" moment. Now while Chris may very kindly have significantly reduced his skill level to train with me, I found that when I followed Sigung's instructions I was able to press Chris across the floor with my combat sequence seven. Some of my punches could have landed and done damage if I had really followed through with them.

By pressing him correctly he wasn't able to get a proper punch in -- he was off-balance and had no secure footing. His fists were punching the air around him (a point which he articulated and demonstrated to me afterwards -- Thank you Chris. It was a superb session and helped me so much in my training).

When I didn't follow Sigung's instructions due to my own emotional insecurities, and resorted to trying to land a strike here and there while moving in my stance with no fixed purpose. Chris, at his significantly reduced level of skill, had total control over me. He was the guy driving me back. He could have floored me with any one of his boxer punches.

The difference between the two approaches was quite remarkable. One is the correct way to fight, the other is not. I learned this lesson at the Intensive in Penang in April but must confess that some of its finer points did not remain with me over the months -- to be successful you need to press into your opponent and execute the sequence at the same time. Timing and spacing is everything!

In addition to the profound lesson in combat, that whole evening was the most fun I have had in a very long time!

We must of course acknowledge that we may always come up against an opponent more skilled than us who can get around us using our sequences in this manner. But that is a separate issue. As a methodology in fighting, using our combat sequences as intended by our Grandmaster is masterful and tremendously effective. It is the real way to fight. If a boxer or kick boxer of roughly equivalent skill level to me (or even a bit higher) had come into that room that evening and challenged me, I'd have nailed him to the wall!

Tremendous stuff. And of course, hugely beneficial in our daily life as well.

I would like to offer my sincere and deep thanks to both Chris Sifu and Christina Sifu for putting together a spectacular festival of Tai Chi Chuan. Your entire festival logistics were superb, you welcomed me with an open heart and beaming smile and you did a brilliant job in ensuring Sigung had a great time. It was also really superb to train with you both! Thank you both very much. I am really looking forward to welcoming you to Ireland in February. Oh we are going to have some fun fun fun I can assure you. Oh yes we are, and hey, the Guinness will be better here too!

I met a lot of family members for the first time. Oh what lovely and wonderful people! It never ceases to amaze me how Shaolin Wahnam continually attracts the most amazing people into its classes. Yes, we are all here to better ourselves through the arts but at our core we are all great and wonderful people. Thank you all so much for making me feel so welcome.

I would also like thank my Sifu for offering me the right encouragement to go at precisely the right time (not to mention all the wonderful Tai Chi Chuan weekends!). I had a number of doubts beforehand about going and wrote to Sifu asking for advice. Her reply was GO! and listed a number of reasons as to why her advice was go. Every one of them have since proved valid and true. Thank you Sifu. Not for the first time you have guided me through my own doubts and helped me enormously in the process.

I am really looking forward to playing my part, as best I can, in welcoming you to Ireland next February again Sigung. Thank you.

All the best to the Shaolin family, 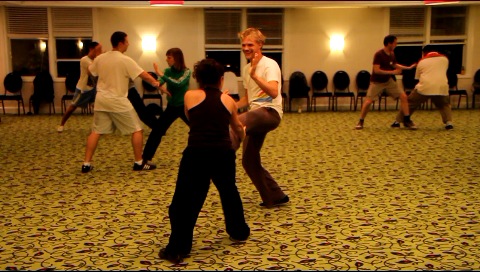