I just came back from a memorable and wonderful time in Hawaii, having participated in the Intensive Zen Course as well as the Shaolin Umbrella course.

I guess it is not quite unusual to come back from a course with Sifu in total awe and with (quite literally) exploded expectations. Well, this was no exception - I certainly had no idea I would end up talking about space sheep in front of an audience in the middle of the Zen course. As this course had never been offered before I came with a shiny empty cup, which is now overflowing with wonderful experiences and happy memories!

The course was a summation of everything I have learned so far with Sifu, and then taking it further with a simple and clear map - all the way through to the highest goal. What was remarkable for me is that Sifu's simple, systematic, and direct instructions made everything feel achievable. Not only achievable in the distant future, but right now!

During the course, Sifu mentioned that the original title for "The Complete Book Of Zen" (to this day my favorite book of his) was "Understanding and Experiencing Zen". That would also have been a suitable title for the course (along with "Learning how to flow in daily life, turning any problem in an opportunity in under a minute, public speaking on the spot, going through life with no thoughts, expanding in the cosmos at will (or no-will), how to never get stuck, creating your reality, and making your and other people's life a joy" - which granted, might not have been as elegant).

It also happened to be one of the most fun courses I have experienced. At some point Sifu taught us how to pick a subject and talk about it on the spot in front of an audience, letting ideas coming spontaneously, and refining as we went. This led to the most hilarious and yet amazingly cohesive speeches I had heard for a while! (That's when the "space sheep" came into action). Not only that, but I experienced such joy in going through the experience that it reminded me how much joy is an integral part of our training. Not just a by-product, but a fundamental component!

True to form, Sifu never held back and transmitted countless tools, methods, and skills to apply Zen in any situation, at any level, and for all sorts of mindsets. I think there was something for everyone, and it was very inspiring to be in a room full of non-blockage (it's like no-thought and non-thought. "non-blockage" is when there is so much flow that the notion of blockage doesn't even exist )

The umbrella course was equally as wonderful, and actually served as the perfect follow up to the Zen course. Learning to flow with whatever is coming, with no thoughts, no resistance, and "harmonizing" with the opponent (even when he is charging with a gigantic Guandao) was exactly what we learned during the Zen course, and we were able to learn to manifest it in a martial context. Who knew so much could be done with an umbrella! (I confess I didn't )

As always, it is of course up to us to now apply what we've learned, and to nurture the many gifts we've received. That's another thing I was reminded of: that Sifu is always transmitting and sharing countless ways to change our own life, and no matter how many times we don't get it, he keeps going until we eventually click onto something.

From my heart, thank you Sifu for your example, generosity, patience, and abundance. It is an honour to learn from you, and I am deeply inspired to keep striving to follow your example. Thank you also to Simu for her generosity in giving so much of Sifu's time for his students!

Thank you to Anthony Siheng, Chris, and Christina for the amazing organization and the huge work that went into making the course a reality. The setting for the course was nothing short of breathtaking!

Last but not least, thank you also to all my wonderful Shaolin brothers and sisters who made the trip so much fun and meaningful. Here is to next time!

With love and respect, 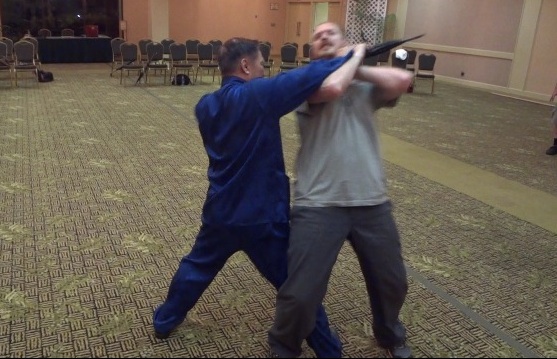 The above discussion is reproduced from the thread Intensive Zen Course, Umbrella and Space Sheep in the Shaolin Wahnam Discussion Forum.