TRUE KUNGFU MASTERS ARE NOT INTERESTED IN FIGHTING COMPETITIONS 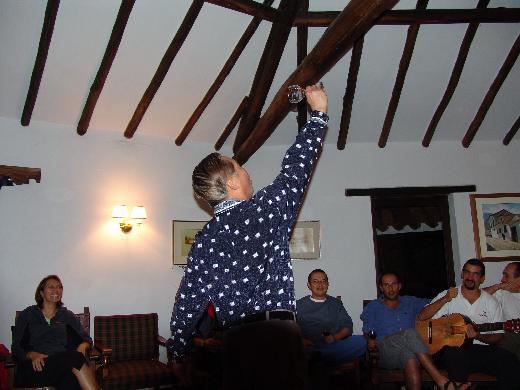 Instead of fighting, true masters prefer to enjoy life. Here Grandmaster Wong joins his students singing after a VIP Taijiquan class where the participants are company presidents and their spouses.

Good question. It's not easy. First of all, you need to have the experience of working with someone who has internal force. Only then do you have something to compare it to. Also, as you progress in your Chi Kung practice, you develop sensitivity for energy and internal force. I am not trying to be obtuse, but the only way I can describe it is that you learn to "feel" this kind of force.

Been there. Done that. I dealt with those types back in my Karate dojo. It's NYC. We've got 'em all. Challenge matches were actually common in the history of my dojo. Thankfully, they were less and less common by the time I got there.

The majority of Sifu's students (99.9%) are respectful, but I have dealt with some attitudes in the courses. I'm ready to do the same with potential students in the future. But I think you're right. I don't envy me either.

I'll bet there's already a long list of people who want to test me (or at least act very brave from their computers). That's fine. In fact, if I were 5 years younger, I would have already gone to challenge some of them. (I did go, but I just watched, smiled, and left.) Sifu does not encourage that kind of behavior, and I understand why. Negativity breeds negativity. I'm getting too old for that shit.

I'm glad to see that I'm maturing. It turns out that some other MA forums have already seen this thread and made disparaging comments. My initial reaction to all of this talk is, "So much talk, so much typing, not enough walk." I must admit that the cowboy in me is still drawn to this "throw down" mentality.

While I think there can still be room for this mentality somewhere, I now understand that it can breed a cycle of negativity that can go on and on. I'm a serious Buddhist. So is my teacher. My Chinese name means "Peaceful Path." There are more important things to do with my energy than take or give challenge matches.

That don't bother me. I walk my talk. Anyone who has actually met me or trained with me knows that. 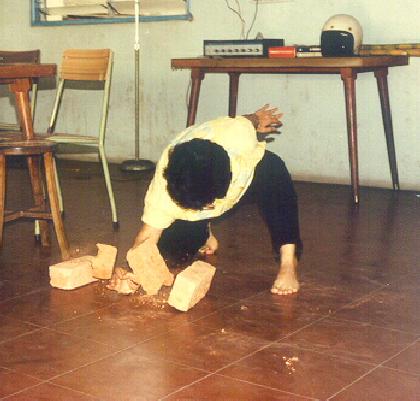 No one said it was easy. It takes decades of dedicated practice to reach that level. By the time a master gets there -- after years of a practicing an art that not only encourages, but also requires letting go of ego, embracing peace, and being compassionate -- he's just not interested in things like UFC.

People don't seem to understand or believe this apparent paradox. They repeatedly ask, "Why don't they show us?" In reality, the reverse is true. If asked to demonstrate his power, an internal master, if he even acknowledged your presence at all, would probably ask, "Why don't you show me...that you are deserving?"

People who think that money and fame are legitimate motivators for a genuine Kungfu master have probably never met a genuine Kungfu master. It's like asking a Buddhist Monk who has developed powers through his meditation to go demonstrate on national TV. These people just aren't interested in fame, a "BIG paycheck" or making "history."

Furthermore, fighting in UFC is a great way to get someone hurt -- either you or your opponent, or both. This is a lose lose situation for someone who practices compassion. We are talking about masters who would run from a fight rather than cause unnecessary damage to someone. Why would the same masters willingly seek out a fight?

The same member posted a video.

. Is this their idea of "top fighters and strikers"? I'm assuming that the so-called Karate guy is the one in white pants. This is precisely what I was talking about earlier.

I don't know who this guy is, but IMNSHO, he's terrible. I am amazed that anyone would think that he is a good representation of a stand-up fighter. He didn't lose to grappling. He lost to striking, after which, his opponent went in for an easy throw.

Honestly, I don't know his reasons for posting that link. I'm just assuming it was to show his idea of "good" sparring. I could be wrong. 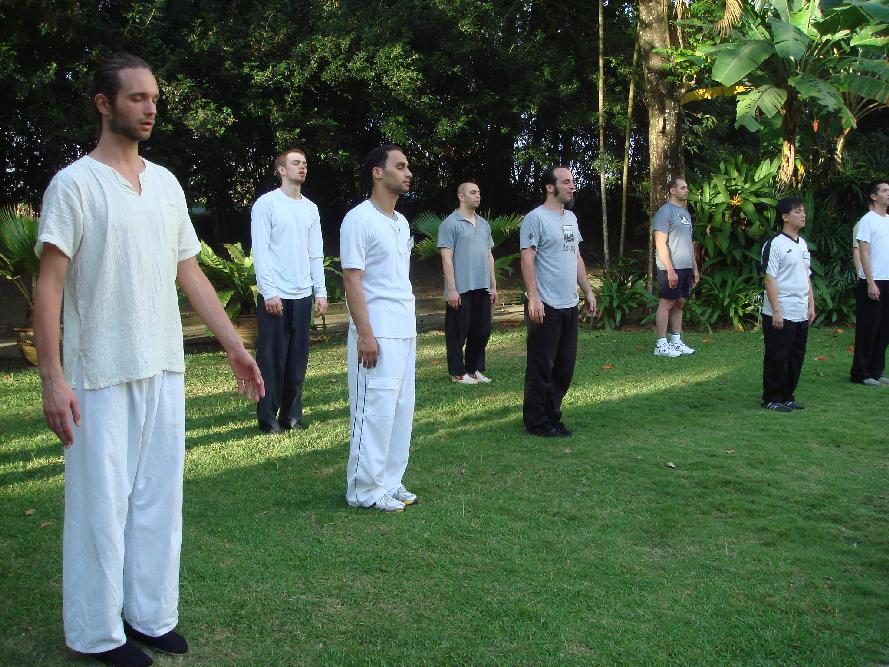 Back to the subject. In my opinion, that video is a good example of a bad example of a “Striker” in a grappling situation. Someone mentioned that the Strikers have gotten better in recent UFCs. This may be true, but the ones I saw in the past were unimpressive. The Strikers were slightly better than the guy in this video, but then again, so were the grapplers.

My point is this: the majority of the noise made from UFC and the other tournaments is just that -- noise. It doesn't prove that BJJ is better than Kungfu. It proves that those Grapplers under those circumstances under those rules were able to dominate those Strikers.

One of the major arguments made by the Grapplers is that Striking arts are incomplete because they are lacking in ground fighting skills. Grapplers tend to laugh at anyone who doesn't learn the sprawl or some other basic ground skills. To me, this argument seems hypocritical.

The same thing can be said about BJJ and other grappling arts. They are also incomplete, and arguably much more incomplete. Grapplers presume to make up for their inadequacies by cross training in other arts, but do they succeed?

Most Grapplers I know are not interested in these goals, which is fine. All of their training is towards one goal -- competition. These are martial sports, not martial arts. Training methods change in accordance with the rules of competition. They may be more brutal than other sports, but they are still sports. Ask any Grappler if he wants to fight allowing eye strikes, knee strikes, groin strikes, throat strikes, clawing, biting, and head butting, and I bet he will say no.

The response to this statement will probably be "show us." Unfortunately, it's not that easy. I will do what I can in the near future. Within the next few months, I hope to have some videos that will better illustrate my points.

However, many Grapplers will never be convinced, not even in person. Not all techniques are as easy to “show” as submission techniques. There are many techniques (like the ones that are not allowed in UFC) that simply cannot be "shown" against an unwilling, resisting, skeptical opponent. Here's a story to illustrate.

After a long discussion not unlike this one, I finally squared off with a Grappler. Before we started, I told him what was likely to happen. I told him that I would probably tap between his eyebrows to simulate an eye strike. I asked him very nicely not to hurt me because I wasn't going to hurt him. He agreed, but I don't htink he was really listening.

He tried a few typical tricks, then shot in for a tackle. As he was coming in, I tapped him gently on the forehead. He didn't notice and continued what he was doing. Before the mount, I managed to grab his ear, but I quickly let go because he was being aggressive and I was afraid of doing damage. The fight ended when he eventually got me into a submission arm lock. I tapped out. He wanted to continue sparring. I said “no thanks.”

This is an example of why we don't enjoy sparring with Grapplers. They are, by Kungfu standards, rude partners. This Grappler probably told all of his friends that he made a Kungfu guy submit. That's fine. I know what happened. I guessed what would happen even before it happened. I tried to explain this to him politely, but he wasn't interested.

Submission techniques are excellent for "showing" because there is no debate. An arm lock causes enough pain to make you give up. Everyone knows you've lost.

On the other hand, a simulated eye strike is unlikely to make modern competition fighters give up. In the old days, a fighter would not only notice, but acknowledge such an act of compassion (tapping the eyebrow) during a duel. He would immediately admit defeat, and might even get on his knees and beg to be accepted as a student.