KUNGFU IS NOT JUST COMBAT, IT IS ALSO SPIRITUAL 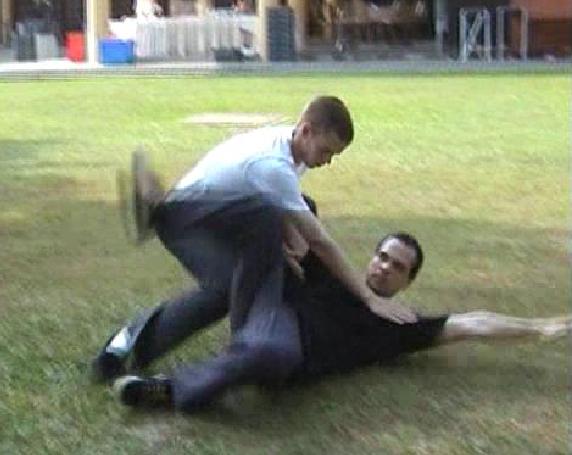 Felling is an important category of kungfu attacks. The picture shows Steven applying a felling technique on Joe during an Intensive Shaolin Kungfu Course in 2005

For a period of about 30 years, many mainstream martial arts and martial sports forgot about wrestling and grappling, creating a serious weakness in their arts. This is the main reason for the success of Gracie Jujutsu, UFC, and the Grappling "fad." The "grapplers" pounced on the weakness in the "strikers" and made them look like fools.

However, this does not meant that, during the past 30 years or the 2000 years before that, practitioners of genuine Kungfu had the same weakness. They did not.

I wasn't talking about Boxing. Western Boxing is extremely vulnerable to Wrestling.


I have yet to see any high-level Kickboxers fighting in UFC or the other NHB tournaments. In any case, we are talking about internal martial arts here. Landing one strike is more than enough.

Furthermore, there are many other "strikes" that can be landed during the transition from standing to grappling. In Kungfu, there are 4 categories of attack, Da, Ti, Die, Na (Striking, Kicking, Felling, Chin Na). If a grappler gets past my striking, kicking, and felling (easier said than done), then he still has to contend with my Chin Na.

Let's talk about some easy Chin Na. Ears are very easy to rip off. Eyes are easy to gouge from the ground. The larynx is quite easy to rip out of the throat. Interestingly, all of these "strikes" are illegal in UFC and Pride, let alone the more powerful applications of Chin Na. These are the kind of strikes I was talking about when I mentioned that grapplers are vulnerable for several seconds.

In my opinion, both of these fighters are incomplete. When talking about incomplete fighters and their arts, it is always a game of Rock, Paper, Scissor. I'm not interested in these games.

I am. The strikers I have seen in UFC are a disgrace. None of them can even begin to compare to the Karate and Muay Thai masters I have met, let alone the Kungfu masters with internal force.

I am with Antonius on this one. Most of the UFC fighters don't even know how to punch properly. This is the reason why they use gloves right now. They broke their wrist when they punch.

IMO, the only good striker is Chuck Lidell who is the best UFC and PrideFC standup guy. 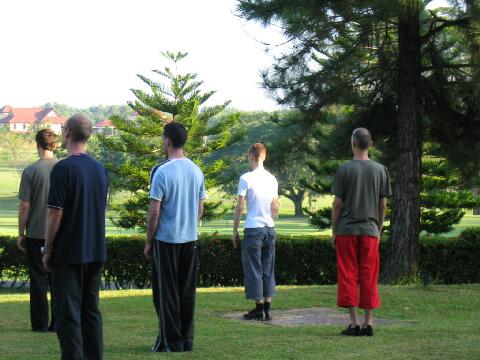 In Shaolin Wahnam, kungfu is practiced not just for combat, spiritual cultivation is an essential aspect of our training. Here participants of an Intensive Shaolin Kungfu Course enjoy spiritual joy after a vigorous kungfu session.

This is turning into a great discussion!

True, but I honestly don't know of many kung-fu exponents that would strike with a closed fist. I certainly wouldn't.

Regarding kung-fu stylists neglecting ground fighting, has anyone ever seen the famous Butterly Palm set? It supposedly has a vast array of ground-fighting techniques.

It is interesting that people in the kung-fu community generally have laid low. But I suppose that kung-fu begins and ends as a spiritual journey. Those of us on that journey may love training great arts, even though we may not have ever seen UFC or know what K-1 is. I think we need kung-fu masters the same way we need great violinists, writers and painters. They make an immense gift to the world and help us to develop our spirit. Why focus on ring sports?

In my experience, it is the man who has nothing to prove who is more powerful. He is further along the path. He has already been through youthful exuberance and the need to test himself. He has confidence in himself and his abilities. He is gentle and compassionate. He would run from a fight rather than hurt an opponent. He has nothing to prove to anyone.

I stopped watching these fights, so I don't know what is happening recently. Your description sounds like there is some skill these days. Maybe so, but what I saw was not skillful.

In the first 5 or 6 UFCs, I saw black belts who could not throw a proper kick, let alone a powerful kick with proper timing. I saw John Wayne punches. I saw so-called Kungfu fighters who not only didn't use Kungfu, but also used their borrowed arts so poorly that they have given Kungfu a bad reputation. I would call this a disgrace.

I like this sentence a lot, but maybe that's just because I'm also a writer and a violinist.