A MASTER'S ADVICE ON GROUND-FIGHTING 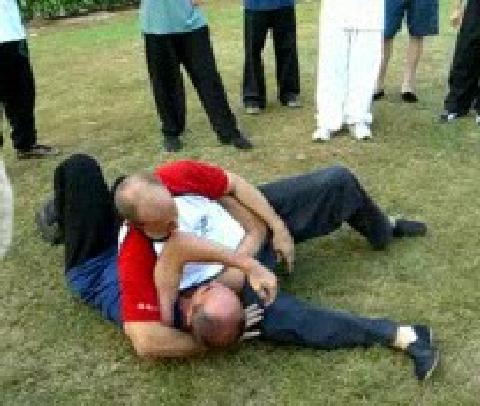 Grandmaster Kai Uwe Jettkandt, a master of ground-fighting, showing participants how to release themselves from Wrestling holds at the Special Shaolin Kungfu Course in August 2005

Most people who compare different MA's make the following mistake. They compare sport with self-defense!! Even UFC fights got some rules.

Antonius is right if he says he can use the Tiger Claw. But avoid the strong parts of your opponent. For me the Pro-Grapplers also have a kind of Iron Shirt. They will feel less pain then an ordinary MA.

So with the Tiger Claw, attack the throat, eyes or the balls, I know it sounds hard but we are not talking about sport, we are talking about how to survive.

One of my specialties is Grappling and I know what I'm talking about. As a good grappler I try to control both arms because I know the MA who are not very firm with ground-fighting like to punch even on ground.

My advice is that if you are already on the ground always move the whole body like a snake. Don't ever use strength, so the ground-fighter can't fix you.

P.S.: If you get tired in ground-fighting you are doing something wrong. Ground-fighting for me is like sticky/pushing hands with the whole body

This has been argued before dude. Before the UFC kids would sit around the lunch table arguing over whether the wrestler could get the boxer in a hold or if the boxer would just knock him out when he comes in. As much as I wish the striker usually knocked out the grappler, this is rarely the case in the UFC.

Pro boxing and kickboxing champions are lucky if they can land ONE big strike before it goes to the ground, let alone knock the guy out. This is not to say that the striker will always lose, he'd just better know what to do on the ground. So unless you are a better striker than the kickboxers that have fought in the UFC, I would continue to invest lots of time in that Tiger Claw. 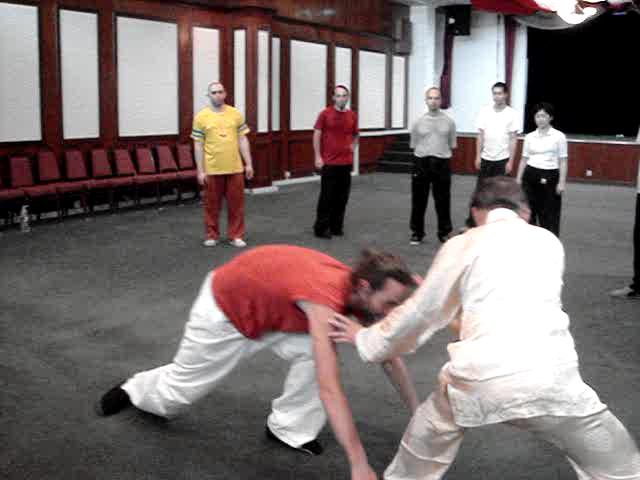 Grandmaster Wong retreats a step to avoid the momentum of the shoot, and simultaneously strikes the opponent's head. Without the protection of safety rules, attempting a shoot is suicidal. Anyone thinking that his opponent is not smart or fast enough to strike, or powerful enough to cause injury on the head, is just being naive.

You're right, I am not talking about self defense. As a professional fighter, I am more concerned with sport fights. The only way I am ever going to get into a real fight is if someone attacks me or a friend or if I catch my wife in bed with some guy. In both cases, I wouldn't worry about kickboxing or jujitsu, I would look for some hard objects nearby.

It's not just martial artist who are not firm with ground-fighting who like to punch, its Olympic medalists and collegiate wrestling champions.

Most of the exhaustion I incur is due to trying to hold them close to me so they can't launch big punches when they are on top of me. Other than bucking your hips up which you do to get them close to you so you can grab them, there really isn't much else you can do in this situation (as far as I know) if you do not want to eat any punches. So either you are an incredible grappler or your endurance is superhuman.