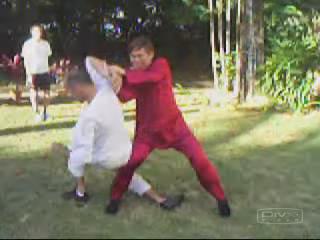 I already came up with a solution! Tiger Claw . Problem solved. Just because you guys don't understand doesn't mean we didn't come uwith a solution.

They did, in fact, take it into account and came up with an elegant solution: Chin Na. The Tiger Claw involves Chin Na. Taijiquan is rich with Chin Na techniques.

Since this is a Taijiquan thread and we're really straying from the topic, I'll provide another answer. To counter a shoot or a tackle, a Taijiquan master might use "Jie Li Da Li" which means: borrow force from opponent, and use his force to beat him back.

If the master ended up on the ground somehow, he could still fight. He could, for example, channel internal force to his palm and strike powerfully even while lying on his back. Or he could channel force to his fingers and grip (similar to a Tiger Claw) with enough intensity to crush bones.

The fact is that a grappler is extremely vulnerable to counter attacks from the moment he begins his shoot until he fully completes his mount. This can take a long time, at least 5-6 seconds. In a fight to the death, 1 second is an eternity. During this time, an internal master has many options, all of which are potentially lethal to his opponent.

The reason shooters and grapplers don't worry about such things is because they have never fought someone with such internal force. They are prepared to take a normal hit on the way in. They don't mind taking punches on the ground because they aren't as powerful. Unfortunately, all of this goes out the window when dealing with internal force.

Sorry folks, but attempting a shoot or a tackle on an internal master is a really bad idea. Unless your opponent is compassionate, it is suicide.


No, because the majority don't know the methods. Others don't believe such methods work. Still others who do believe and do have the methods don't have access to a genuine master. The number of people who are left are, understandable, very few.

Not all strikers are created equally. For example, I may be a striker, but I also know Chin Na. I would consider Sifu a "striker" but he can literally crush my elbow into pulp with his Tiger Claw.

And BTW, we are laughing. We just try to do it quietly. 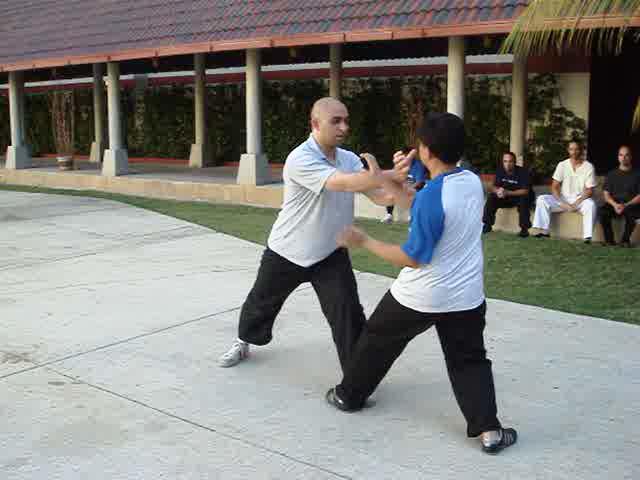 Although I by no means have the internal force of yourself Antonius in tiger claw, I must absolutely agree with your opinion on grappling.

My experience is that all of the techniques of jujitsu can be found in kung fu, but in a real fight with a grappler I would rather have tiger claw than a black-belt in a grappling art.

There are two reasons for this...

You can immobilize your opponent without immobilizing yourself. Additionally, all you need to do is make contact with your opponent to apply the skill. I can grab someones throat or elbow, but really if the force is great enough you can grab anywhere in any position and get a similar result.

I'll note that I recently defeated another exponent in grappling by using this skill. He had me in the mounted position (for those of us who do not speak ju-jitsu, he had me just about defeated), when I remember Sifu Wong's book and just grabbed his throat. The fight ended there and no one was hurt. That's what I mean by efficiency and compassion!

While on this subject, I'd like to mention that I am beginning to practice Taming the Tiger as an old teacher of mine once taught me. In Master Wong's The Art of Shaolin Kung-Fu, a much more refined training method is offered, but by following it without personal instruction I would probably just hurt myself. In your opinion Antonius, is it alright to train Taming the Tiger (i.e. pushups on your fingers) on its own to safely attain at least some internal force?

Thank you very much for your help!

P.S. I changed my name from TaiChiJoe to KungFuJoe in the new forum because I decided to pursue the Shaolin Arts after careful consideration. I have the utmost respect for the great art of Tai Chi, but Kung Fu just happens to suit my personal aims and style better. No offense to anyone in the Tai Chi community!