CAN THE TIGER CLAW BE USED AGAINST ANY GRAPPLING ATTACKS?

I use muscle when grappling too. I don't even realize it until I feel extremely tired very quickly. This was what originally attracted me to tai chi, since it doesn't rely on muscular strength, but I just didn't have the patience for it. Maybe when I get older.

Currently we just train jujitsu for about 15-20 minutes at the end of every workout. We don't even know what we're doing, just trying to emulate guys on UFC. But so far it's been working really well. If someone doesn't know the submissions it is very easy to get them. Doesn't require much strength. I think push hands is great too, I intend to start practicing it regularly again.

My only problem with tai chi and the kung fu I have practiced is that it doesn't really seem to provide a solution to going to the ground other than "Don't let them take you down." Ha I've heard my classmates talk about this like its nothing.

I'm not saying I don't like tai chi or kung fu. I am just saying that I choose to supplement my training with some ground-fighting too. It adds some variety to the training and makes for a lot of fun.

I have a simple counter to all ground fighting. It is also one of the few techniques which can be applied on the moon:

According to the grappling guy I work with, everyone who knows more than him says you want to be extremely relaxed and light on your feet until the last possible moment.

I used to get exhausted really fast too. When I started following his advice (and I changed my cardio from running to swimming) I stopped getting as tired.

Well, I'm one of the few guys on earth who's never seen a UFC competition. But, in my grappling training, I'm concentrating on:

I reason that, as a striker, either I'm taking someone down as a finishing technique or I've wound up on the ground and want to get back up ASAP.

If someone doesn't know the submissions it is very easy to get them.

Karate is much the same way. However, I've found principles in karate kata (not many, but I didn't really look too hard) that seem to suggest they contain some solution to this problem. I would suspect kung fu and tai chi are the same boat.

After all, we are talking about self defense - defending against any kind of spontaneous attack. If the forms are supposed to contain principles of self defense, then I suspect its there but we don't know what we're looking for. Cross training will help this a great deal.

BTW "Don't let them take you down" really translates to "I never came up with anything to do against that so stop asking because its embarrassing." Or, at least that's what it means in the karate world ;-)

Keeping an open mind is a very difficult thing to do. 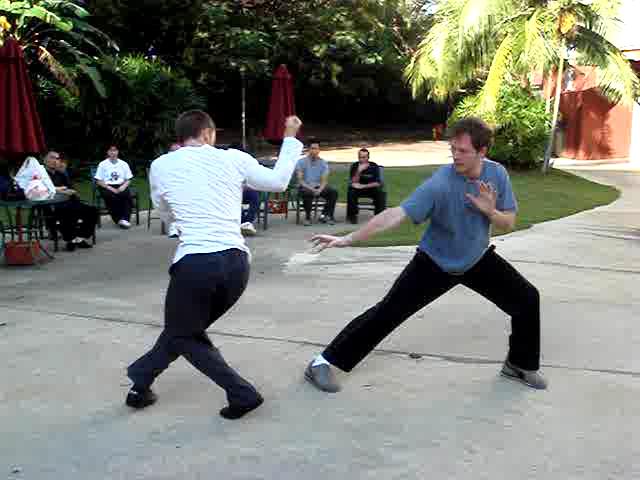 Maybe I'm just dumb and am not getting the joke, but I find this a little hard to believe.

Here's why. Although I have no doubt a properly applied tiger claw will, at the very least, create an opening into which you can insert all manner of counters - one size does not fit all ie one technique is not suitable for all situations even if the situations are all similar.

If the tiger claw was the answer to all ground-fighting questions then we'd all learn it and strikers would have been laughing at judoka, jujutsuka, wrestlers, BJJ'ers etc etc from the beginning of time.

As for fighting on the moon - its extremely unlikely I will be getting into trouble up there ;-)