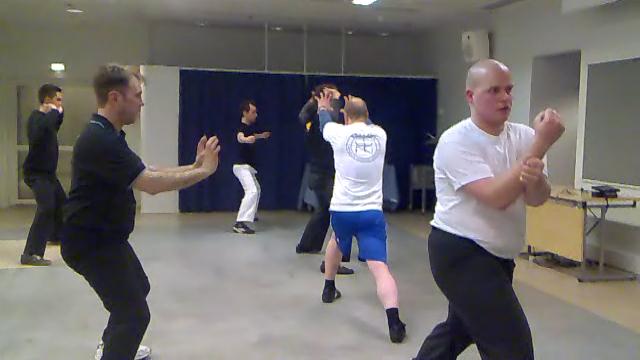 Absolutely fantastic news that Sgung has decided to teach the amazing Iron Wire Set in Ireland. I have read much about it and seen some video clips and i know it will be amazing.

Firstly Thank you Sigung for being so generous as to teach this set in Ireland.

Secondly I would like to share an experience i had only last week when i sparred with a very experienced martial arts instructor.

I would like to mention some of the benefits that i felt i have gained from internal force training and that i hope i can further enhance my training from doing the Iron Wire course with Sigung.

I have been practicing chi kung and golden bridge/stance training for the last five years as a means to develop internal force and i never thought much of the benefits of it until i had a training session with a very experienced martial artist this week at work.

I will set the scene for my story, (my apologies if it's long winded!)

I recently started a new job working with about 120 people and as one does i discussed with a few colleagues that i do some Kung Fu training for health reasons and that i enjoy the training. The word spread and i discovered that a few colleagues like to practice on their lunch break.

A colleague approached me last week his name was Darragh, he invited me to spar with him some lunchtime if i wanted so i accepted. He had a reputation in my workplace as being an excellent martial artist and that he could shoot energy at you whilst fighting and blow you up against walls etc so naturally i was intrigued.

Darragh explained that he has been practicing Kempo for 11 years and also practiced reiki for 10 years also. He said that between himself and another colleague they have devised their own style of martial art called "Ken Krav Do" which has basically taken parts of Kempo, Krav Maga and invented his own martial art.

I presented down to him on a lunchtime the next day to train for about 40 mins partly because of curiosity and also to test my own kung fu against him with some "friendly sparring" and also to see a different martial art.

Darragh started off by explained a few techniques he has been working on for a while and that he tries to bring energy to his hands before striking. He asked me to hold a pad while he struck it with a lot of force. The two strikes he used were a knife hand strike and a hammer fist strike. Both strikes were with the outside of the hand on the pad. To explain the strikes both were similar to the "false leg handsweep in motion we preform.

I noticed he gave me a very small pad and struck it with a lot of physical strength and he methodology was to try and strike throw the target and let the hand fly into the pad. He hit the pad about five times and invited me to do the same with i did. Physically he would be a very big strong guy about 6ft 1" inches tall and about 16 stone in weight. I must admit the strikes left me with a bit of a sting afterward and perhaps he was psychologically trying to psyche me out. Afterward we moved onto some sparring.

He gave me some headgear and boxing gloves and asked me to put them on for the sparring. I explained that in our school we spar barehanded but with control and we don't go out to hurt anyone physically but he insisted in a friendly way " sure just throw on the gloves and we will only do a small bit". I agreed simply as i thought what harm could it do.

We agreed to use hand sparring for the first two bouts. I used bow arrow stance and tried to use my double dragon hand forms and he came at me with a barrage of punches straight punches, hooks , uppercuts and was going full contact. I had been hoodwinked into a western boxing contest full contact with a heavyweight opponent who seemed hell bent on trying to inflict as much on me as possible. So much for the Kempo!

I was quite annoyed with myself for firstly for agreeing to wear boxing gloves severely hindering my ability to do some kung and also being so naive that this was about some friendly sparring. The first two bouts of sparring were about three minutes each so i asked for the third round did he mind if i used some kicks he said no problem.

I thought this was my opportunity to turn the tables and as there were no boxing gloves hindering my feet it gave me a chance to fight more efficiently. I started the third round with a double naughty monkey to his knee and head and as he came in i hit him full force with a white horse kick into the chest anytime he came near me. Three more white horse kicks followed left and right.

We sparred the last round for about 10 minutes and during that time i had successfully used felling tree with roots and took my opponent the ground and had blown him back several times with kicking the sky and side kicks followed up by fierce tiger punches. I felt it was a point scoring contest i would have definitely won the last round and had landed many kicks on my opponent to the head, chest, shins, etc.

Afterwards we shook hands with no animosity and i noticed a few which i thought very relevant points with i will outline what i learned from the fight, i will call it a fight as friendly contest had gone out the window.

1. Darragh was panting for breath and sweating profusely after our sparring which lasted about 20 mins in total. He also had to bend down to rest. I can honestly say i was not tired after the sparring.

2. Darragh told me after he lifts a lot of weights, runs and has been practicing martial arts for 11 years ( eventhough i did not see much in the way of Kempo that day). I have been practicing kung fu for five years and physically would not be as big, muscular or fit as Darragh so surely i should have been panting? I attribute this to the fact that i must have some internal force from my training which enabled me to not be tired.

3. There was also not a mark on me from the sparring, no bruises on my arms, legs, no soreness in my legs. I did have some stiffness in my neck and shoulders but that went today from chi kung this morning and feel 100 percent. I attribute this to internal force. The fight took place yesterday.

4. How do i know that internal force has helped me? Simply because i previously had practiced Tae Kwon Do prior to this for about 10 years. I did it from the age of 10 to 20 years of age, i'm 30 now. I used to fight twice weekly with my tae kwon do training at that time and used to practice full contact sparring, kick bags etc and used to be physically drained for a few days after. Whereas today i did a full hour a Kung Fu Training and felt brilliant afterward.

5. Darragh also explained to me that his training methodology is to fight using hard on hard and if someone tries to strike him to try and meet it with more force. Trying to hit the opponents hand, in my own head i was thinking, will this not invite more physical injury? and would it not be simpler just to sink back in a stance and counter strike?

Anyway that is the end of my sparring session story, and hopefully i have explained clearly what happened and that i can be useful to others.

I suppose if i can finish with a few questions about the Iron Wire Set.

Would someone still continue to practice golden bridge after learning the Iron Wire set?

Is the Iron Wire one of the most efficient ways of continuing to develop internal force?

Are there any additional benefits to internal force training possibly different to anything i outlined correctly or incorrectly above?

If i could get any answers to these questions i would be grateful. 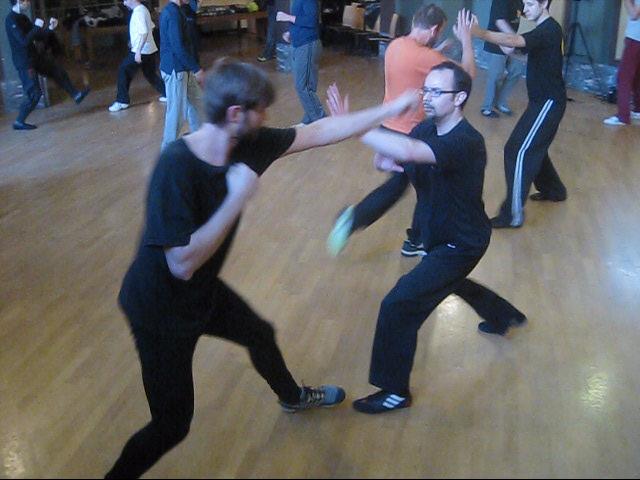 Grandmaster Wong's answers to Eric's questions can be found here

The above discussion is reproduced from the thread Fantastic Iron Wire / Western Boxing vs Kung Fu in the Shaolin Wahnam Discussion Forum.