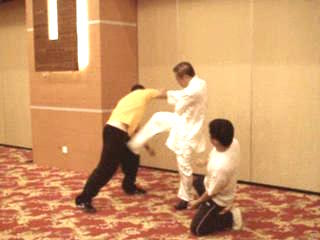 There are two main approaches to fighting against multiple attacks. One is known as "Fighting with a Fort Behind".

I am back after a short break. This post will be about single against multiple attackers. It is difficult to convey in words the feeling of facing such an attack, so use your imagination, or get some friends to try this with you at home.

Sifu had us start with two attackers who would each attack with a Black Tiger. What do you do? Well, you can step back into a stance and use two Single Tigers. Are any of you thinking this is an inferior counter? After the initial simplistic attack, the two of them can follow up with a flurry of kicks and strikes and one guy simply cannot deal with twin attacks at the same time.

Anyone who knows Sifu's method will recognise that this is a case of experiencing the lesson before the theoretical explanation. Sifu then pointed out the weaknesses of this defence / counter, as it violates the principle of "two hands cannot beat four hands". He then taught us to deal with one attacker at a time. 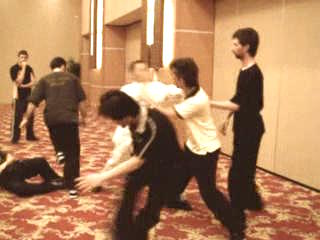 Another main approach in fighting multiple attackers is known as "Entering a Herd of Sheep".

However, just the day before, I had used the two Single Tigers during sparring. When Steve was launching a middle attack at me, someone almost knocked into me from the side by accident, and I used this exact counter - so to me, it certainly is a useful pattern to have.

We first learnt how to deal with multiple attack scenarios with our backs to the wall, and when there is space to move around. One thing we learnt from direct experience is that increasing the number of attackers is not just a numerical change, but a sea change in how we should deal with the situation. We went to a maximum of 5 attackers, and along the way, we were often overcome by only 3 or 4 attackers. I learnt that great timing and flowing are essential to surviving such an encounter. Hesitate when a counter-strike should be made and you will never get a second chance.

Sifu's "The Complete Book of Shaolin" contains many of the lessons we learnt that day, but reading about principles and tactics in a book, and being personally taught by Sifu among very skilled exponents is a world apart.

The above discussion is reproduced from the thread “ 2009 Advanced-Combined Shaolin-Taijiquan Course ” started in the Shaolin Wahnam Discussion Forum on 6th October 2009.