THE INNER JOY I HAD PRACTICING QIGONG IS TRUE AND REAL 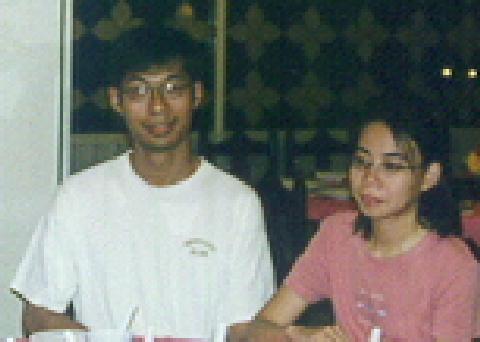 Yixin and his beautiful wife, Yan Wei, at the welcoming dinner in Malaysia

I truly felt that no matter what happened to me, even if I lost my job, it wouldn't bother me because I felt very strong and very joyful. It was a kind of unconditional happiness, at the same time, love for other people. -- Yixin

This journal by Yixin Guo is reproduced from his website at http://yixinchikung.diaryland.com/

Day 1: We all sat in the lobby and waited for sifu's arrival. Sifu walked in with big steps and a broad smile. We all stood and greeted with left palm over right fist

Sifu told us to follow his instructions and not ask any questions. We should not worry if we didn't understand his tips, we should just carry on with what we were doing. That was great advice because that meant I didn't have to strain my ear to listen or worry if I didn't catch his words. We learned “Lifting the Sky”, first the physical movement, then with breath coordination.

The most I learned that day was that I was afraid to let go. Sifu's personal instructions helped a lot. "Throw away your back. Throw away your legs. No tension." I instantly started to fall backward, however, unafraid to fall and not taking a step back until the very last moment. During the chi flow after doing “Lifting the Sky”, I had gentle swaying back and forth.

In one session, the first time I brought my hands up in “Lifting the Sky”, I felt a lot of tingling. As I lowered them, a lot of tingling and warmth was in my right hand. It felt like it was floating, like it was very light and fluid, weighed much lighter than my arm used to. We also learned “Pushing Mountains” at the end of the first day. 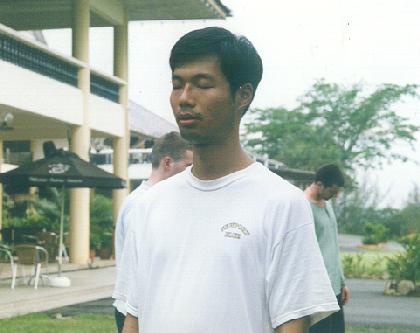 Day 2: We learned “Carrying the Moon”. During the chi flow, I felt better about letting go and flowing with what my body wanted to do. I felt the key was to let go of the ego and not be afraid of how silly my movements might seem to unknowing bystanders.

In the discussion after the first session, sifu was talking about the many aspects of qigong practice. Suddenly, he started talking about happiness. He looked at me in the eyes and as if speaking exclusively to me, "you have a beautiful wife, the best of eastern and western cultures. You should be happy! Not like this," he stood with a collapsed chest and then said, "open your heart!" He broadened his shoulders and spread his arms outward like an opera singer.

Sifu continued, "When you are in chi flow, visualize yourself as very happy or healthy or how you want to be and it will manifest itself in the flow." I was shocked and speechless. It took me a while to accept what he said, maybe 5 minutes. 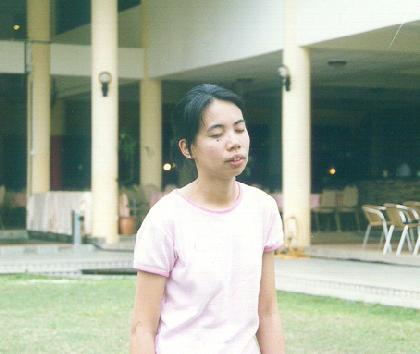 Yan Wei, enjoying a chi flow at the Intensive Chi Kung Course in Malaysia in March 2004

Then I realized that he knew my problem. I wasn't truly happy although I knew that I had a beautiful wife, etc.. When the realization finally came, I was even more shocked. I thought I was feeling happy, even at that moment when he spoke to me. However, sifu saw that I deeply needed to open up, open my heart to the world.

In the subsequent sessions, I tried to visualize myself as very joyful, full of joy. This made all my previous objectives seem petty. Overcoming problems like allergy, near-sightedness are great but opening my heart, an objective given to me by sifu surpasses them all.

Later sifu told me that I had a breakthrough. I must agree because I felt like a slightly different person, much more eager to voice my opinion and thoughts. Sifu and Jeff also helped the new students like me by opening several of our vital points. 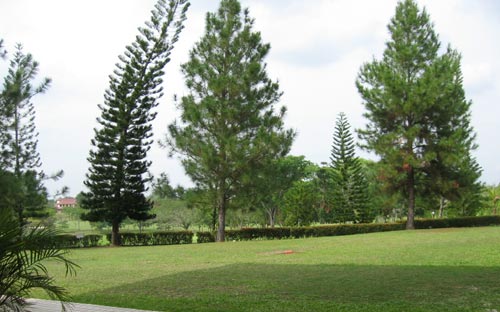 What happened to a tree when Yixin finally let go with his chi flow. Reproduced from Hubert's website at http://www.re-mind.com/misc/qigong_2004/.

Day 3: We learned to tap cosmic energy by using the mind alone without using any physical movements. We went into chi flow, then we visualized a golden shower of heaven chi to cleanse, nourish our bodies and finally build a ball of chi in the dan tian. I felt some tingling sensation in the arms.

I had a great afternoon session that day. In both sessions, we used dynamic chi kung patterns to induce chi flow and then went into self-manifested chi movement. In the first session, I felt my body start to turn right. I followed with my feet turning as well. I felt that I really let go that time and went in circles, however, I still moved my feet consciously. I was spinning slowly.

All of a sudden, the spinning became very fast and my legs were moving faster without my conscious effort. I tried to slow down, however I found I was unable to control my movement. My arms were raised horizontally as a result of the spinning. Then, my hands hit some leaves and my body hit a tree. I was unbalanced and fell and rolled a little on the grass. I laid still feeling chi still flowing in my body, a bit like floating in the cloud, a peaceful feeling.

In the second session, I stated to spin again and again found that I was unable to slow down. Sifu came over to help me. "Yixin, control yourself a bit, slow down a little bit." As soon as I heard those words, I was unbalanced and fell on the grass. "Hahaha.." sifu laughed. I chuckled in response. I was having a lot of fun. It may seem silly to the uninitiated but the inner joy I had practicing qigong is true and real.

Later that day, I truly felt that no matter what happened to me, even if I lost my job, it wouldn't bother me because I felt very strong and very joyful. It was a kind of unconditional happiness, at the same time, love for other people. I am very grateful of what sifu has given me during the three days of the Intensive Chi Kung Course.

P.S. Practicing chi kung after the course without sifu is a bit different. It feels good but the strength and happiness is milder than that during the course. So, now, I would be worried if I lost my job. :)

You can view more photographs at Yixin's Photo Gallary