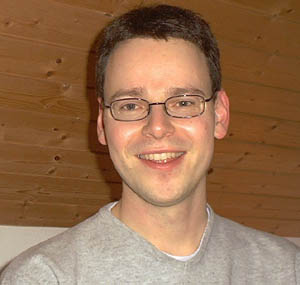 It has now been almost three weeks since I attended your Chi Kung course in Switzerland. I wanted to tell you that it's been a wonderful experience and that my Chi Kung practice is going well.

The day after the course I started seeing lots of beautiful pictures -- it was like a slide show passing before my inner eye (unfortunately this stopped the next day). It was fantastic for me, because I usually have a very hard time visualizing things.

I am very fond of the new exercises I have learnt: the internal force that can be created with "Flickering Fingers" is simply overwhelming. If I use it for initializing self manifested chi movement, my hole body starts to shake wildly and I feel deeply cleansed afterwards.

Dan Tian Breathing is my favourite exercise, because the feeling of my whole belly and lower back becoming warm and energized is most enjoyable! The thing that worries me though is that I've been feeling slightly sick almost all the time during the last three weeks (nausea, light headache, feverish feeling, sore throat...).

Can this be an effect of the practice of these powerful exercises that I'm doing almost exclusively now (but only about 5 and 10 minutes respectively, as you told us) and does this mean that more and more rubbish is coming out?

I'm also very happy with the spiritual practice described in your Sukhavati book. Thank you for so kindly signing my copy; this made it even more precious to me! Everytime I see Amitabha's picture it makes me smile and I feel very joyful. I'm increasing the number of recitations of "Namo Amitabha Buddha" to about thousand times a day and in the evening, while sitting in front of his picture (after making my vow), I try to concentrate on my breathing (as you told me).

Sometimes during this meditation I feel the point between my eyebrows becoming warm, as if Chi were assembling there (similar to the feeling at the Dan Tian during Dan Tian breathing). Is this a good sign? I have to ask you again about the appropriate place for keeping Amitabha's picture. Is it disrespectful to leave it in my bedroom?

I am currently reading a book by Patrul Rinpoche and one point is making me a bit insecure. He says: "Even if you start practising the Dharma, unless you have been accepted by a spiritual friend (=teacher) it will be of no use".

Does this mean my practice could be useless, because I have not been initiated by a living teacher?

May I ask you what your daily Buddhist practice looks like?

Dear Sifu, I still have some questions about Sukhavati, but since this e-mail is already far too long, I will direct them to you later. I apologize for taking so much of your time, but I would be very happy if you could answer some of my questions! 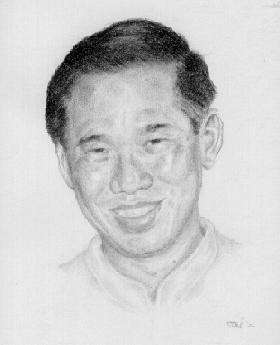 Sifu Wong as drawn by Tobi

Thank you for your interesting letter. And thank you again for the lovely portrait you drew for me. When I showed it to my wife and children at home, they were very impressed with your artistic talents.

A few of my students have had similar experiences of seeing series of pictures as if seeing a slide show. This is because your chi kung training has opened up some psychic centres, enabling you to have this ability. Later you may develop some fantastic psychic powers. Always remember that you must always use your psychic powers for good -- for your own good as well as the good of others -- and never for evil.

Both Dan Tian Breathing and Sinew Metamorphosis are very powerful exercises. They are meant to train scholar-warriors and warrior-monks. The sickly feeling you had was probably due to these exercises being too powerful for you, and were cleansing out your rubbish too vigorously.

Many people have told me that Sukhavati is a fantastic book. I honestly believe I was guided by divine help, probably by the Bodhisattva of Great Compassion, when I wrote it. Your feeling of warmth between your eyebrows was an indication of the opening of your third eye. It will take some time for the opening, and you may sometimes feel some pain. Don't worry about this good pain. As in the case of warmth at your dan tian, it is a good sign.

It will be better to place the image of Amitabha in your hall or living room. But if you wish to place it in your bedroom, it is alright.

So, don't worry about whether you have been formally accepted by a spiritual teacher. Don't even worry whether your Dharma practice brings you blessings and merits. We practice the Dharma because we are convinced that it is the right thing to do. We know it is right because it brings us and others peace and joy.

In fact, as soon as you practice the Dharma, you have been accepted by the Buddha. The Dharma means the teaching of the Buddha, or the Buddhas. "Buddhas" means "the Enlightened Ones". Where are the Buddhas? They are everywhere, found in countless moons, planets, stars and galaxies. Where is the Buddha? The Buddha is everywhere, permeating every atom and encompassing all galaxies. And the Buddha is in your heart.

In some ways, seeking acceptance by a spiritual teacher is only an outward formality. It is shameful when some ordained lay followers glorify themselves with such outward formalities, yet spread lies and slanders. It is even more shameful when some Mahayana monks, like some modern Shaolin monks, openly flout strict rules for Mahayana monks like eating meat and drinking alcohol publicly. (Rules against eating meat and drinking alcohol do not apply to lay followers.)

The Ten Shaolin Laws can be found at http:/www.shaolin.org/general/laws.html.

I have a wonderful, very happy life, and much of this is due to my daily practice following the Buddha's teaching and the Ten Shaolin Laws. I often feel very grateful to the Buddhas, Bodhisattva, immortals and gods who have protected, guided and blessed me and my family, and feel I could never thank my sifus enough for so kindly transmitted the Shaolin arts to me.