THE DIFFERENCE BETWEEN REGIONAL AND INTENSIVE COURSES 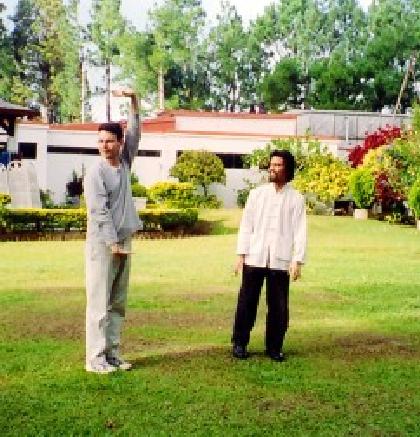 "I experienced for the first time what Chi Kung really is: the art of working with energy."

As many people would like to know about the difference between regional and intensive Chi Kung courses, I would like to share some of my experiences that I have made in Sabah from 1st to 5th July 2004.

After having taken three regional courses with Sifu (the first one in 2001), I decided it was now time for me to attend an intensive course, especially after Sifu had advised me to do so.

Since someone once told me that there was no big difference between the regional and the intensive courses (the exercises taught being "the same"), I initially had some doubts if the long (and not too cheap :) flight and the course fees were really worth it. Now I can say: YES, they definitely were! During these days in Sabah I've been having the most wonderful time of my life.

Here are -- in my opinion -- some of the advantages of an intensive course: 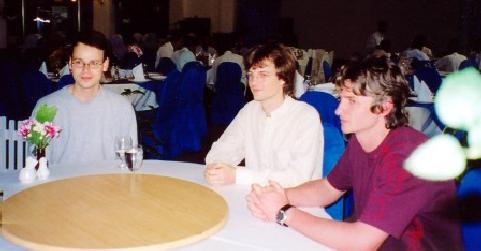 Tobi (Germany), Sapie (Holland) and Charles (Canada) at a dinner table in Sabah

I experienced for the first time what "Chi Kung" really is: the art of working with energy.

After my regional courses I already achieved very good results (mainly for my health) and I also had some nice Chi-sensations but I could not control Chi willingly. In Sabah we learnt in one lesson how to tap Chi from the cosmos by "simply" using our mind.

At the end of the exercise "Pushing mountains" I could actually feel the ball of Chi I was holding (even before Sifu told us to visualize it). While practicing "Carrying the Moon" I had the same sensation of holding a Chi-ball above my head and then I could clearly feel the energy flowing down through me.

In another lesson we learnt how to use our mind to send Chi to any part of our body. Only a few words from Sifu -- and his presence of course -- were enough to transmit that fantastic skill to us (actually, I still can't believe how simple his instructions were).

For my trip back, Sifu showed me how to have a "cosmic shower" while sitting in the plane by "simply" using mind and breathing. Only after a few tries, the Bai Hui point on top of my head started pulsating vigorously which was a wonderful feeling.

Another great bonus was the fact that Sifu was around all the time (I don't know if this is the case when the course is held in Sungai Petani). Having breakfast and dinner together with him gave us a great opportunity to get to know him better as a person.

I was amazed at how kindly he answered all our questions. And if someone had a personal question he took him aside and discussed it with him alone.

When Charles asked Sifu after dinner about his Kung-Fu-training Sifu watched him performing a set and then showed him some applications of the movements he was doing. During another break Sifu instructed Charles, Kevin and me on how to incorporate Chi Kung in our Kung Fu-/ Tai Chi Chuan-training (without us even having asked him to do so!). 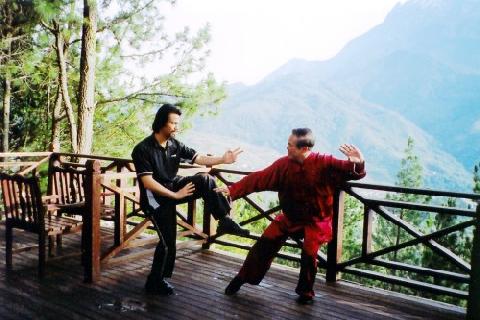 
Travelling such a long distance to Malaysia completely took my mind off the stress I have at work and the whole course was like a holiday for me (but much more rewarding than a mere holiday).

You can be sure that all the participants -- having traveled that far and paid the 1000$-fee -- are true seekers of the art. So it happened that I really liked every single participant and have made many new friends.

Usually I don't feel comfortable when I'm surrounded by people I don't know well, but here it was different. It really felt as if we were members of a huge family. The atmosphere was very stimulating and we had a lot of inspiring discussions.

So, if you want to deepen your Chi-Kung-skills, I would strongly recommend you to attend an intensive course with Sifu. It definitely gave new direction and meaning to my Chi-Kung-practice.

I would like to thank Sifu for sharing the art of Chi Kung with us and for being such a wonderful teacher and such a kind person.

Special thanks to the honorary Sabah organizers, the Kisseys. I truly enjoyed their warm hospitality and kindness. They really did everything to make you feel comfortable and welcome.

The Sabah group. Sifu is sixth from the left in the front row. On his left hand side are the honorary organizers, Dr Damian Kissey and his wife Dr Roseline Kissey. Tobi is fourth from the right in the back row.