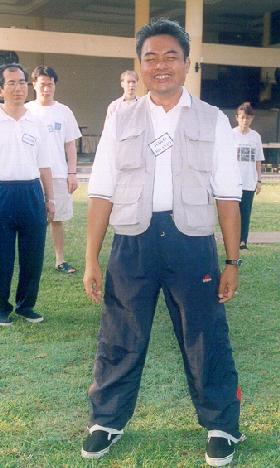 Just after about 2 weeks, I noticed improvements in my knees. And by late January this year, the pain was completely gone!


Thank you, Mr. Andrew Barnett, for posting the names of 18 Lohan patterns, complete with the names in Romanized Chinese. I enjoyed your photos and video-clips as well.

I would like to post here my experience in practicing some of the 18 Lohan patterns, especially "Deep Knee Bending".

Until last October, I suffered a kind of knee pains, some times my left, some times my right knee. I could not squat or sit cross-legged because of the pain. I went to doctors and specialist, and they took blood test and concluded that my knee problem was the result of excessive uric acid. Indeed, since about 25 years ago, I usually took yearly medical test, which was obligatory at my office. The results were always normal, except the excessive uric acid content in my blood.

It seemed that the problems of the excessive uric acid did not trouble me at my younger days, but it began manifesting as knee pains since 2001.

I tried all kind of medications: taking pills, physio therapy, massage and reflexology, even yoga, (and diet) but they did not help much.

Then I came across Sifu Wong's book "Chi Kung for Health and Vitality" in early 2004. In that book Sifu described also the general principles of Chinese Medicine. I enjoyed reading and studying the book, but I did not immediately practiced the Chi Kung Exercise, due to the precautions put for self practice mentioned in the book.

After further study from Sifu's websites, particularly his Answers to Questions Series, I started practicing in October 2004, with some preparations.

I was inspired by Sifu's experience which he mentioned in his other book: "The Complete Book of Zen"; Sifu took 2 years (!) of daily leg exercise to be able to do the Sitting Meditation in Lotus position, despite the fact that Sifu had already been Master in Shaolin Kung Fu. That was quite an excellent example of perseverance, patience, and willingness to sacrifice to achieve best results.

Somewhere in his Answer and Questions Series, I recalled Sifu mentioned about doing other physical exercise for a Singaporean young soldier: to do the physical exercise, required in the Army, as chikung exercise.

In another series in answering another question, Sifu mentioned praying to Guan Shi Yin Bod Sath, before doing the exercise. I concluded then that the most important thing was to enter the meditation state of mind in doing the exercise.

The question was then: How can I reach this state of mind if I practice by myself? So I started studying carefully the expressions of Sifu's face and his students from the pictures and/or videos available in the websites. I acquired also the statues of Guan Shi Yin, the Buddha, and Bodhidharma; I saw their smiling faces, I found peace and relaxation just by being near them. 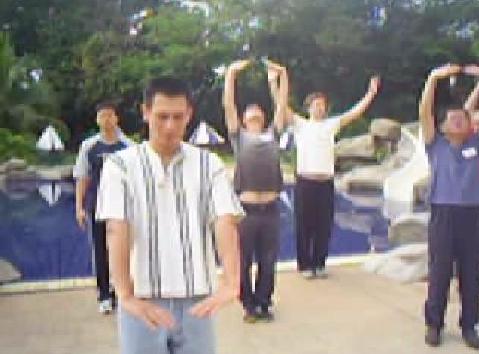 Participants of another Intensive Chi Kung Course practicing “Lifting the Sky”, the first of the Eighteen Lohan Hands.

In October 2004 I started practicing. I practiced all 10 patterns (from Chi Kung for Health and Longevity) and the Leg exercises (from The Complete Book of Zen), particularly the pattern "Deep Knee Bending". Following Sifu's advice I always started by standing upright, calm, and then praying to Guan Shi Yin Bod Sath, asking her help. That was then, I realized now, how I was able to enter the meditation state of mind.

The first few days of doing "Deep Knee Bending" there was more pain in my knees. Even my friends laughed at me, because they knew I had knee problems, why doing this deep knee bending?

But I continued practicing, because I had complete faith in Sifu and complete faith in the Shaolin Arts. (Great method and great teacher, all I needed was to make efforts sincerely to be a good student, even only from his books and websites).

Besides that, I began to enjoy great feelings from the other patterns of the Shaolin Cosmos Chi Kung.

Just after about 2 weeks, I noticed improvements in my knees. And by late January this year, the pain was completely gone! I stopped taking pills for my uric acid, as well as discontinued my diet. I eat whatever food I like, in whatever quantity. My body would adjust, as long as there is no blockage in my chi flow.

It was no surprise then when I learned from the website that Sifu would hold the Intensive Chi kung Course in April 2005, I applied for the course.

The Course proved to be the best days of my life. (You can read about Joko's inspiring experience of the course here.)

Now I enjoy practicing even more, as well as enjoying life and other things. I need only one pattern per session now, and I think I can enter the meditation mind just by standing or sitting still, without formal chikung movement or patterns.

Sifu had kindly given me more than enough skills and foundations to practice and learn further by myself. But every time I practice, I feel that Sifu is always guiding me with his love and caring, even though physically he is many kolometres away.

Perhaps the reason I can feel Sifu's presence comes from learning from Sifu heart to heart.

The above testimonial is reproduced from a post by Joko on 2nd May 2005 in the thread Pattern Names — 18 Lohan Hands in the Shaolin Wahnam Discussion Forum.