DON'T GO ON THIS COURSE! 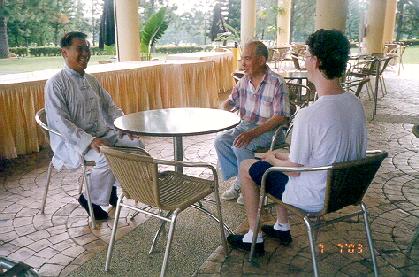 If you would like a relaxing week in the warmth and sun of Malaysia and an easy-going instructor to learn Tai Chi -- then DON'T GO ON THIS COURSE!

Earlier, I suffered from arthritis which makes life miserable. Conventional medicine offered some pain relief but no cure. So I attended the Intensive Chi Kung Course with Grandmaster Wong Kiew Kit in Malaysia, and six months later I was playing tennis once again. What a blessing.

So now it was time to further improve my health to face the second half of my life as I was nearly 75, adapting a joke from Woody Allen.

If you would like a relaxing week in the warmth and sun of Malaysia and an easy-going instructor to learn Tai Chi — then DON'T GO ON THIS COURSE!

We worked hard both in the sense of trying hard and being driven hard by Sifu Wong. If you can't achieve perfection that doesn't prevent you from trying to achieve perfection every minute! Indeed, every minute, on the longer days, of four practice sessions of two hours each. One of the amazing facets was the rejuvenation that took place so that we were rested, ready and eager for each new session to begin. 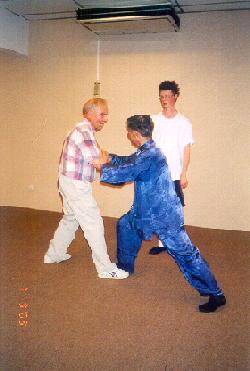 It was an incredible experience for the beginner to be guided by a gifted and superior Grandmaster through the elements of Tai Chi Chuan taught as a martial art, to achieve the fuller benefits of this wonderful skill. These elements included: stance training; movement of chi; the Tai Chi Chuan set derived from the fighting skills of masters; Pushing Hands as a way to get into the martial art aspects without external force and without injury; and the four forms of attack and counter. When I re-read my words above, I am once again full of wonder at what my body and mind were able to absorb and achieve in such a short time with world class instruction.

The genius of Grandmaster Wong Kiew Kit as a teacher, in my humble opinion, is the wonderfully honed ability to take his own tremendous knowledge and experience gained from his masters and his own studies based on the several thousand years of Chinese wisdom, and distill this knowledge into its essence. This essence is then given to each student in a form he or she can absorb; and I would add from personal experience, more than the student would think possible. Just an incredible experience!

Thanks to my friend and training partner Michael Simon who was successful in striking and throwing me without injury.

A truly wonderful week; but don't go to Malaysia with Grandmaster Wong if you want a soft and relaxing vacation. 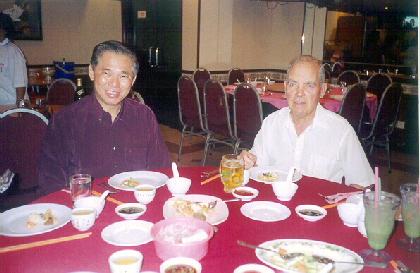 Sifu Wong, John and Michael (not shown in picture) enjoying dinner in Malaysia

It was heart warming to reflect that while many people after 60 would find their muscles stiff and bones brittle, and a fall could land them in hospital, 74-year John practiced Taijiquan combat application where he was repeatedly thrown onto the ground, then jumped up again for more fun!