MY EXPERIENCE IN THE SUMMER CAMP -- XINGYIQUAN 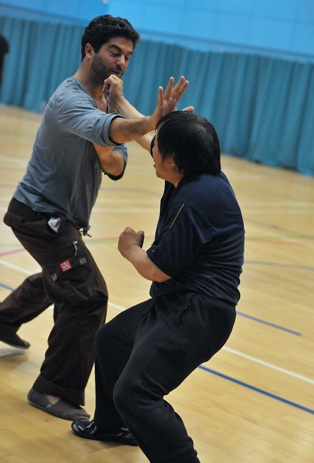 Kam and Omar sparring at the Xingyiquan Course 2013

I did everything wrong in the Xingyiquan kung fu course, despite spending more than 40 hours learning from the video clips on the website. Sigung was very patient and generous by repeatedly correcting my mistakes, but still I performed them wrong. I learned my mistakes by watching other people doing the forms in the class.

I mention this to point out that you cannot always learn martial arts from a video clip. A competent instructor is needed to teach you and correct your mistakes while learning the form and applications.

Three days after learning the applications of the Five Rlemental Fists and Twelve-Animal Set, we were divided into four groups, with six people per group. Sigung told us to design our own combat sequences.

Thirty minutes later we then demonstrated our combat sequences. Afterwards we were asked to make comments on the combat effectiveness of those sequences and how to improve them. Sigung then corrected our mistakes.

On the last day we were told to create our own combat sequence and test it out on our sparring partner. My performance was not good. I was punched, kicked and thrown to the floor by Sibak Tim. I was outmatched and handled as though I was a child.

Two hours later I realized the mistakes I made. I was confused by his kick boxing movements, and had I just ignored his fancy movements and concentrated on using the Xingyiquan combat sequences; I would have been able to handle some of his attacks. He would still have defeated me easily, owing to his superior skills, but I would have lasted longer than expected.

I have learned from the sparring sessions the things I need to improve on.

I showed Sigung three different martial art books and told him what those books were about. He glanced through them and told me to learn Xingyiquan instead. Three hours later I was agreeing with his comments. In theory Xingyiquan kung fu has the counters to the techniques shown in those books, but I still need several years of hard training in order to apply Xingyiquan kung fu against high level opponents.

Xingyiquan is a simple, direct and effective form of martial arts, but very few people can apply it in real life. At the moment I can only find Xingyiquan students using boxing/ kickboxing techniques in sparring matches on YouTube.

Some of the applications in Xingyiquan are similar to the techniques used in Wing Chun. I realize there are kicking techniques hidden within the Five Elemental Fists.

Sigung is an excellent teacher and willing to share his knowledge. His instructions are simple and direct to the point. Thank you Sigung for teaching us Xingyiquan kung fu, and also to everyone else for helping me to learn Xingyiquan.

Last night when I was practicing the Santi Stance (expansion mode), I felt chi flowing through my body after two minutes of training. My legs were shaking several minutes later, and then my upper body was shaking as well. I stopped doing the stance training twenty seconds later and quickly did a chi flow.

Is it possible for anyone to tell me whether shaking the upper body and legs are normal when doing the stance training for more than eight minutes?

Thank you very much for your help

The above is taken from the thread, Xingyiquan at UK Summer Camp 2013 in the Shaolin Wahnam Discussion Forum 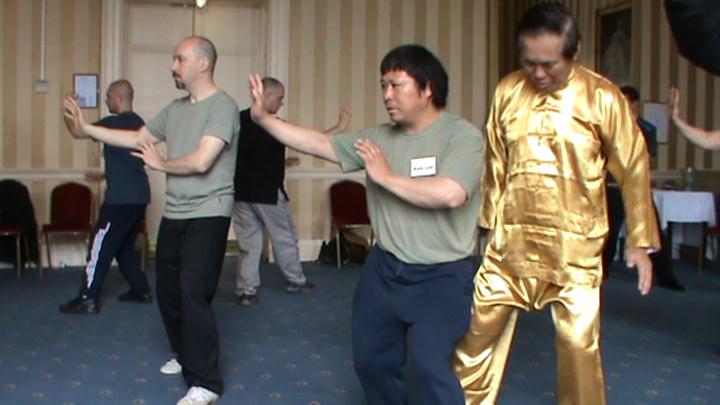