I WAS GIVEN A WONDERFUL GIFT 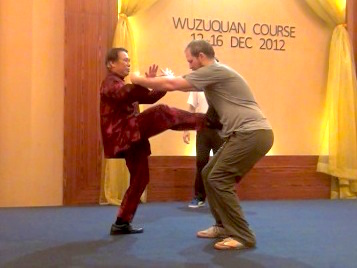 I have been given a wonderful gift

As the course participants know, Christina and I initially planned to follow the Small and Big Universe Course with a few relaxing days in Langkawi before coming home. Although the Wuzuquan course was not as relaxing as Langkawi would have been, it was far more beneficial, and I'm glad and grateful that Sigung asked us to stay for it!

At first glance, Wuzuquan isn't much to look at. What became apparent as the course went on was that the founders distilled Wuzuquan to such an incredible degree that its superficial simplicity belies an incredible emphasis on skills. A prime example is the triangle stance. It's amazing how opening the Baguazhang stance just a bit totally changes things!

Whereas from the Baguazhang stance, you either have to use footwork or switch to a Shaolin stance to swallow or otherwise defend an attack, the waist rotation and range of movement afforded by the triangle stance means that you can most of the time stay rooted in place if you want to. We often talk about large to small movements, and in this context, if Baguazhang represents large movements then Wuzuquan represents small ones.

The flavor of internal force developed/used in San Zhan is unlike any other I have experienced. It has such a strong vibration to it, that I was actually sore from it after the first day, as it forced parts of my arms and shoulders to loosen up. This soreness was all but gone a day later.

On the third day, I had a special, unanticipated benefit While demonstrating a sequence with Sigung, he struck me (without making physical contact). I didn't notice, and I was confused when I went back into the sparring line and he asked me to do Lifting the Sky and have a chi flow instead.

As soon as I started chi flow, it was immediately clear that something was different. I had the craziest chi flow I think I've ever had! When I wasn't done laughing/crying in a few minutes, Sigung came over and opened some points. I had no sense of time, but from talking to others, I was probably in chi flow for a solid 20 minutes, and I'm certain I cleared much more than the initial damage.

I felt incredible pressure at my solar plexus which rose up into my chest and then exploded out my hands. For much of the chi flow I felt my energetic body as my primary body and barely felt my physical body at all. In this state, I was aware of a light blockage in my arm and directly experienced that it was not only possible but easy to just brush it away. The whole chi flow was a beautiful experience.

Later, Sigung asked me how I was feeling, and I sincerely told him that I had been given a wonderful gift.

Thank you to Sigung and my Sifu, and thank you to the other participants. It was wonderful to train with some old friends I hadn't seen in several years, as well as to finally meet some folks I had not had the pleasure of meeting face-to-face. And a special thanks for the birthday cake and wishes! It was special to have my birthday on a course, especially with Gorilla Roland's birthday also on the same course! 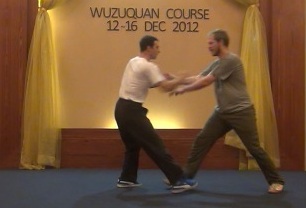 The above is taken from the thread, Discussion -- Wuzuquan Kung Ku Course in the Shaolin Wahnam Discussion Forum