THE TAI CHI CHUAN FESTIVAL IS A DREAM COME TRUE 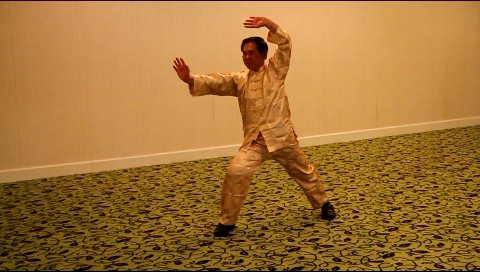 It has been a dream of mine to have a regional kung fu course in the US on par with the ones that our family in Europe have long enjoyed, and between the courses in Las Vegas and the Tai Chi Chuan Festival in St. Pete, to say that my dream has been realized is an understatement! For me, it was a single, continuous experience, so while I will focus on the Festival here, I have to at least mention the Vegas courses.

First, we had terrific groups of students at all of the courses. As students are part of the Sifu/Arts/Students triangle, this had a great effect on the benefits we received. I'm especially happy that all of the American instructors (with the exception of Eugene, who was busy preparing for Sigung's visit to Dubai) attended at least one course, which, with how spread out we all are, is no small feat. It was terrific to see all of you again and to meet the few of you I hadn't previously met.

I had a lot of personal break-throughs during the US courses, starting with the very first Chi Kung course in Vegas (Selection of 18 Lohan Hands)! Breaking through to a deeper level of letting go in chi flow helped lead me to successive break-throughs in each of the other courses. I am amazed that while I know my expectations will be exceeded each time I learn from Sigung, I am continually surprised by just how much they are! May I never learn my lesson.

Regarding the Festival, I was amazed at how each course built upon the previous ones, both Chi Kung and Tai Chi Chuan. As Christina described, Abdominal Breathing was a special highlight from both an attendee's and an instructor's point of view. In the Tai Chi Chuan courses, not only did we cover each (very long) set in 5 hours, but we developed and deepened important skills and even did combat applications. And not only did we do combat applications, we practiced effective ways of applying Tai Chi Chuan at the sequence level against other martial artists (and later, other Tai Chi Chuan practitioners).

One of the Tai Chi Chuan highlights for me came during the Flowing Water, Floating Clouds course. We practiced Carrying the Cosmos and Immortal Waves Sleeves emphasizing flow and correct waist rotation, and I could really feel the ball of chi/force I was holding in Carrying the Cosmos and how it was directed into/around my forearm when in Immortal Waves Sleeves. The back hand isn't near the front elbow purely as a guard hand!

It was also special that I got to have fun sparring with my brother Mike as the last session at the Festival. Every time we used to spar in taekwondo, we couldn't help but be reduced to laughter and goofiness, and it's wonderful to have a proper way to spar together where laughter and fun don't detract from the sparring, but can enhance it.

So here's a big thank you to everyone who came out, and especially to Sigung, Sifu, and Sisook Anthony S. It was a fitting and proper end to follow the graduation dinner with a big party at our house! It was a special end to a very special event, and I am so happy and honored to have shared it with you all. 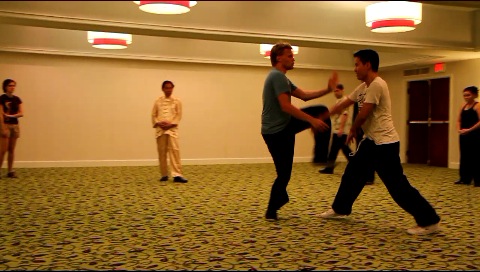