SIFU'S TEACHING AND MY CHI KUNG PRACTICE HELPED ME HEAL 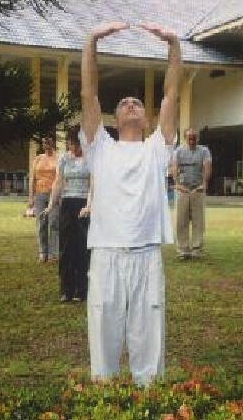 In December 2014 Sifu Anthony Korahais resigned from Shaolin Wahnam, denounced Grandmaster Wong Kiew Kit as his teacher, and explained his action in a post, Why I Left Sifu Wong After 17 Years. (The post has since been removed by Sifu Anthony Korahais.) The post drew many comments. Below is one from a courageous victim, Angeline.

What does it mean to be a victim? We want to side with the victim, to rally on their behalf, to listen to their story and offer support and understanding. Perhaps we want to do something to right the wrongs in the world. But this is a very complex issue.

I have been a victim, I am a survivor. I have spoken out. I have been angry, and wanted those inflicting pain and suffering on others to be persecuted. There are many types of sexual abuse. It sounds to me that the predator in this situation used manipulation tactics on a physiological/spirit level. As an adult I have fallen prey to manipulation on the psychological level. I have been coerced, and felt deep regret. Powers of manipulation can be dark, confusing, and subversive. I would also add vile.

I have done a lot to work on my own inner healing. I was only four when I was first abused. I later worked as an artist and did my graduating work based on women who suffered from sexual abuse. I interviewed women and read many books. But there is a danger taking on someone’s battle, defending and listening to personal issues of sexual abuse. I have wanted to protect with righteous indignation. I have also wanted to understand.

Exploring my sexuality as a woman has been difficult, messy, mistakes have been made, I have gone down some wrong roads. It’s a place of extreme vulnerability and exploration. I have fallen prey – it was a learning journey. Unfortunately, I had to endure being hurt to learn some lessons. I also understand that even if a sexual act is consensual does not necessarily mean it won’t hurt someone.

But even accepting the previous statement I would be careful when using the word rape. And rape by definition is: “unlawful sexual intercourse or any other sexual penetration of the vagina, anus, or mouth of another person, with or without force, by a sex organ, other body part, or foreign object, without the consent of the victim.” Consent being a key word here. And this territory is not always clear.

I have wondered about myself as a child, why was I singled out? And later why have I been targeted, as an adult? Also, how can I find some silver lining in this? Having been a victim I have great compassion, empathy, sensitivity and sometimes understanding. I try to form my own opinions and am very careful in sharing information. I am not out to sway opinion or even receive support. It is my process and can be at times painful.

People siding with me or even speaking out loud on my behalf have not been helpful on my spiritual healing journey. Pointing fingers and feeling anger and vengeance are extremely unhelpful.

The journey is not easy, but for me I eventually had to do it alone. I had to pass through and not be the victim; I also had to pass through depression. Psychotherapy, medication, reading, talking, making art did not guide or help me, though perhaps a little.

My guide was internal, and I had to trust and be honest with myself. I had to observe, listen, trust with ‘eyes open’ and Chi Kung is what helped me the most in this personal process of healing and ‘letting go’. I also had to make a leap of faith. I had to be open to the wondrous beauty of our world.

I would have no defence if I was attacked and brutally raped (though if I practiced Kung Fu I might). But I do have the defence and ability to see psychological forms of manipulation. I have an important internal gauge that steers me away from manipulative, destructive, subversive forces.

I also practice being a good person. I try to be open and truthful to myself, and trust my intuitive side (which was not an easy process at first). When I encountered someone who I discovered was cruel and abusive I reacted with wanting them to suffer and be hurt (justified by my internal struggle), it turned around and made things worse for me on a deeper level. And these were only thoughts. Though the road has its difficulties Sifu’s teachings and my Chi Kung practice helped me heal and move on and lead a happy life.

I try to be honest with myself. Therefore I am very careful who and how I tell anyone about my path. Getting people behind me to rally for me has not been helpful, maybe in the short term. But actually I found it quite damaging. I think if the abused women feel strongly wronged they need to bring it to police/court.

I understand that predators are not always found guilty and the court system not necessarily just and the process painful, the boundaries at times vague. But it brings information in the open. Or perhaps open/honest statements by the abused, sent privately or publicly. Does it leave you open, even to attack? Yes. But honesty and truth will prevail. It cannot be someone else's narrative of events.

The path is difficult whether you speak or do not speak. Ultimately it can be a difficult road, and there is no avoiding it, but how you approach it and with what kind of heart (open /closed) is very important.

As I said before I have taken on women’s feelings, sentiments and battles and fought for them, for me and alongside. This has not been helpful to my psyche. The fight might have looked like I was defending someone, fighting for them against injustices, but it was also damaging and made me sick.

We all have a path with hurdles, blockages and deep psychological roles. Doing good and avoiding evil is the right path.

I met someone on a course once who was elderly and severely ill. People were very respectful and helping him in many ways. During the course Sifu spoke directly to him in harsh and loud tones. It struck me as odd and a different approach to healing. I later approached the student about it and found out he was hard of hearing and did not experience the same situation as loud and harsh. Perhaps Sifu needed to use a different energetic approach with this student.

I also had a strange revelation after, where I understood that the student’s ailment was self created. It was a strange moment in the path of compassion. Oddly, I still feel for this person but not in the same way. I am also very careful not to take on someone’s personal/emotional life.

Sifu’s role is not to judge and persecute. He is not condoning abuse. He is acting compassionately. Sifu’s approach can be confusing and very different. But he is working on a different energetic level.

Someone taking my side and battling for me is not helpful in the long run for me or them. Both predator and prey have blockages, and both need to grow and overcome. It is Sifu’s job to help both, as quickly and efficiently as possible.

Anthony, getting people to back you, rally in your support, take on you your perspective, side with you will also not help you down the line, nor the abused women. You are misleading, even though you and your supporters feel you are taking the moral high ground and trying to put an end to wrong doings and bring a predator out in the open. I don’t think you are guiding appropriately.

Also, someone acting as martyr “one who makes a great show of suffering in order to arouse sympathy”, makes me immediately wary. Ultimately there are so many facets of manipulation. I have never felt any level of manipulation from Sifu as a student. Because if I did I would never be his student.

Sifu has the capacity to help those affected to heal, recover, lead a happy life and experience spiritual joy in an amazing short period of time. And yet you steer people away from him. This saddens me deeply. For I do not believe you have this ability.

Resignation of Some Instructors
An Analysis of Anthony's Campagin