HOW WOULD A WING CHOON EXPONENT COUNTER SIDE ATTACKS 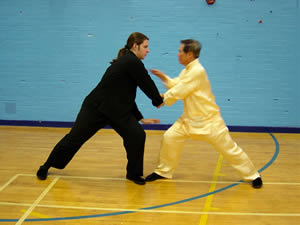 Can you please explain some Wing Choon techniques against side attacks?

Suppose you are a Wing Choon practitioner. If your opponent uses straight attacks, such as thrust punches, you would have no difficulty. A favourite Wing Choon counter is "Than Sau Phiew Chee", striking the opponent about the same time his punch is spent. Suppose he attacks you with a right thrust punch. You ward off his right punch with your left "Than Sau" (Mirrow Hand) and simultaneously strike his throat with your right "Phiew Chee" (Finger-Thrust).

How would you defend yourself if your opponet uses side attacks, such as horn punches, or "hooks" as they are called in Western Boxing. If you use the typical Wing Choon counter of "Than Sau Phiew Chee", you could be in trouble. Even if you could block the horn punches, their momentum-force clould penetrate your blocks.

Moreover, this would be "using force against force", a situation Wing Choon Kungfu, which is particulary useful for smaller-sized oppoents against larger opponents, usually seeks to avoid.

There are many effective Wing Choon counters against side attacks. We shall examine a few examples here. 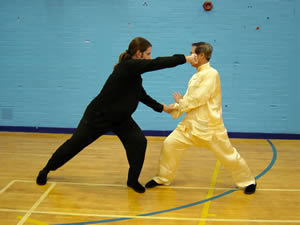 In the above photograph Dan "tames" my hands with his left hand and attacks me with a right horn punch. 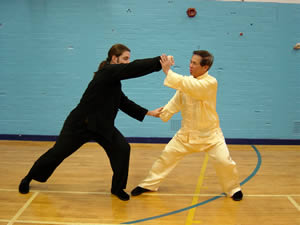 Without moving my feet but sinking my body backward, I avoid the horn punch. At the same time I "cover" Dan's punch and following its momentum press it agains his body. 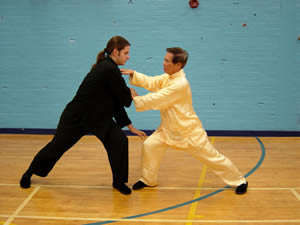 Without any break in my own momentum, I move my body forward and thrust my fighers into his throat using the typical Wing Choon "Phiew Chee". All these actions, covering the horn punch and striking the opponent's throat, are performed in one smooth movement, and this pattern is known as "Kam Sau Phiew Chee". 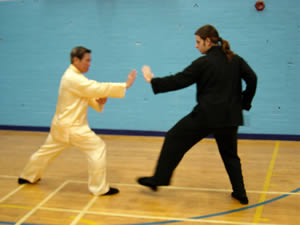 In the above photograph Dan moves in to attack me. I remain at "Wu Sau" (Guard Hand) to wait for the right moment to respond. 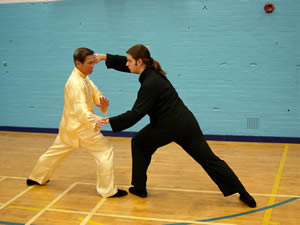 Dan again attacks with a right horn punch at my left temple. 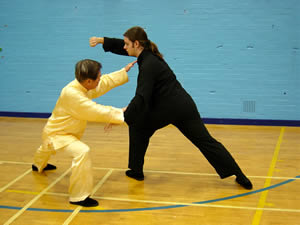 This time I use a different counter. I move my right leg a big step diagonally to my right side and simultaneously thrust my left palm at his throat, using the pattern "Chak Ma Phiew Chee" (Side Stance Finger Thrust). 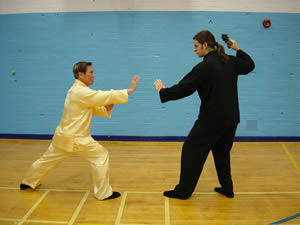 Now Dan is going to attack me with a weapon held in his right hand. It could be a baton, a stick, a dagger, an axe, or a sword.

Instead of moving about amlessly which may distract my focus, I remain calm and judge whether his attacking moves are real or feigh ones. "Wu Sau" (Guard Hand) is a useful pattern to adopt as it can keep the attack at bay. When he comes too near, I can jab my fingers into his eyes. 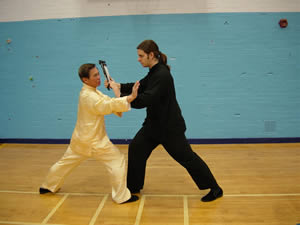 The opponent has moved within striding distance and has started the downward momentum of his strike. 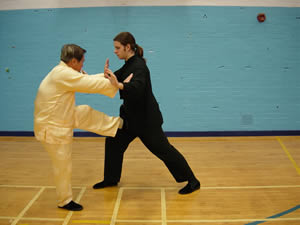 I move a small step diagonally to my right side away from his striking momentum, cover his arms, and simultaneously execute a thrust kick at his groin. This Wing Choon pattern is called "Sim Sun Thang Thui" (Dodge Body Thrust Kick). 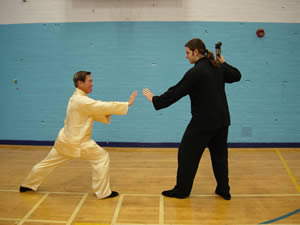 Dan is going to attack me again with a weapon in his right hand. I obeserve him using "Wu Sau" (Guard Hand). 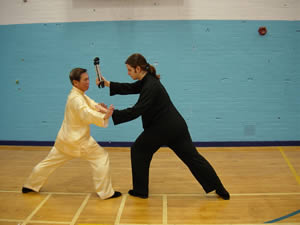 Dan "tames" my hands and his weapon comes down in a diagonl sweep. 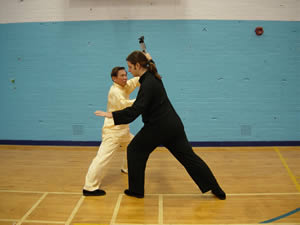 I "sink" my body slightly to slip away from his "Fok Sau" (Taming Hand), and move a big step diagonally to my left, into the direction of his sweeping weapon, and apply the Wing Choon pattern "Phor Pai Sau" (Breaking Flank Hand).

This pattern is simple, but when applied skilfully it is very effective. In one move not only I stop the opponent's attack, but also break his elbow and strike his chest. My timing and spacing must be accurate, and I must have sufficient internal force. 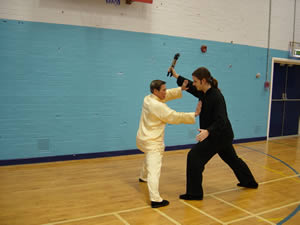 The above picture shows "Phor Pai Sau" from another angle. Notice my left palm striking the opponent's elbow, and that his weapon could not reach me though I move into its direction.

Examining the list above, some informed people may wonder why are the two other famous unarmed Wing Choon sets, "Chiam Kiew" (Sinking Bridge) and "Phiew Chee" (Thrusting Fingers), not found in Choe Family Wing Choon. They are, but instead of existing as separate sets as in Yip Mann Wing Choon, they are found within the fundamental set, Siu Lin Thao, itself.

In Choe Family Wing Choon, the fundamental set is called "Siu Lin Thao", which means word by word "Little Practice Beginning". This set (or the first third of this set, because the other two thirds exist as separate sets as "Chiam Kiew" and "Phiew Chee") is called in Yip Mann Wing Choon as "Siu Lim Thao", which means word by word "Little Thought Beginning".