COUNTER AGAINST THRUST KICK WHEN HANDS ARE HELD 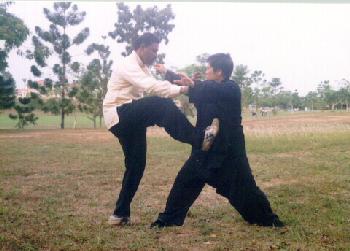 
What would you do if an opponent grips your both hands and executes a thrust kick to your chest?

One common strategy is to attack the opponent first with one hand, and as he responds with his one hand, immediately attack him with the other hand so that he would respond with his other hand. Then grip both his hands with double tiger-claws, open his "gate" and strike him with a thrust kick, using a southern shaolin pattern called "White Horse Presents Hoof", as shown above.

It may be a surprise to some martial artists that the counter against this seemingly formidable attack is quite simple! Indeed a master who knows his opponent likes to employ thrust kicks may lay such a trap. First he pretends to be naive and allows his opponent to manuovre him for a thrust kick. Then he applies the counter.

Some people call this the "chess aspect" of kungfu. You do not rush in to strike your opponent. If he is skilful, rushing in is asking for trouble. You lay a trap. You feign some weakness so that he falls into your trap. Then you strike him when he is in a disadvantageous position.

One effective counter is as follows. As the opponent kicks, turn from a Bow-Arrow Stance to a side-way Horse-Riding Stance and simultaneously deflect the kick with a verticle elbow-block. As your turn your body, you must also turn your both wrists in small circles. The turning of the wrists release the opponent's grips on them. This pattern is known in southern shaolin Kungfu as "Bar the Stream to Block the Big Boss", as shown in the illustration below. 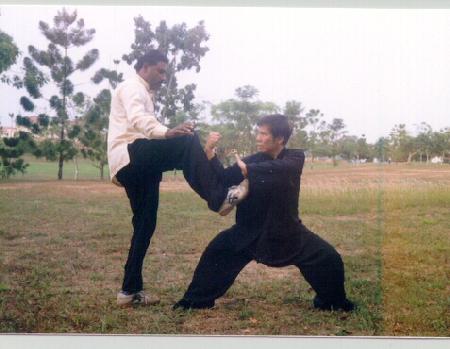 
As in using "Fisherman Casts Net" to counter being held from the back as explained in another webpage, a solid stance is more important than the relevant technique in applying the counter. Equally important is correct timing.

There are a few follow-ups from this favourable position. One is to strike his abdominal dan tian using the pattern "Precious Duck Swims through Lotus". Another is to grip his foot and dislocate his ankle using "Double Dragons Subdue Sea Monster". You should, nevertheless, be careful of your head as it is explosed in this position.