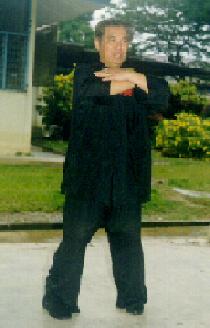 I have learnt a pattern in Wing Choon (Wing Chun) Kungfu where the arms are folded in front of the chest. How is this pattern used in combat?

This pattern of folding your arms in front of your chest that is found in Wing Choon Kungfu is a good example of a technique which looks innocent but is actually very effective for combat if you know how to apply it. Countless kungfu students have perform such a technique without ever realizing how it can be used for self-defence. Indeed some “masters” have spoken about the flowery nature of kungfu and, blindly admiring the directness of such martial systems like karate and taekwondo, have attempted to remove such kungfu patterns from their repertoire.

The following sequence shows a combat application of this Wing Choon Folding Arms.

Goh Kok Hin strangles my neck with his two hands. Such an attack is quite frequent when women fight among themselves, and Yim Wing Choon, the lady master who founded Wing Choon Kungfu, had a wonderful counter to overcome this combat situation.

Using the Wing Choon Folding Arms to overcome the strangling attack, I fold my arms and grip Goh's left wrist with my left hand, and Goh's right wrist with my right hand. Holding Goh's wrists I press down hard, causing him some pain and therefore loosing his grips.

Simultaneously I move my right leg forward to place it behind his front leg, and using the turning momemtum of my right shoulder, I press down on his left arm with my right elbow, causing Goh to loose balance and fall onto the ground. Notice that in this situation, Goh has to release his grips on my neck, otherwise the combined actions of my hands pressing on his wrists, and of my right elbow pressing on his left elbow would cause him severe pain or dislocation of his wrists and left elbow.

Wing Choon Kungfu is sometimes regarded as a “soft” art, although many of its techniques and force can be very hard. One should bear in mind that here “soft”, or “rou” in Chinese, is different from what many Westerners would conceptualize soft is. “Soft” in kungfu context can be very forceful; its main characteristics are that the exponent exploits the opponent's strength, and that brute strengh is not necessary. In this situation, for example, the harder the opponent clings to his grips on my neck, the worse it will be for him.