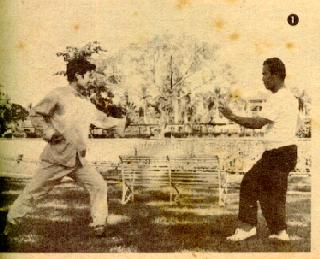 I've heard that the Plum Flower Fist was used by many masters in the past. What is it and how is it used? 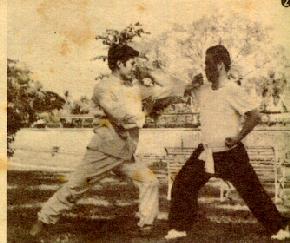 The Plum Flower Fist, or Mihuaquan in Chinese, is a set of kungfu movements. The word quan by itself literally means "fist"; but in kungfu context it is often the shortened form of the term quan-fa which is one of many Chinese terms for "kungfu". Some examples are Taijiquan (Tai Chi Chuan), shaolinquan (Shaolin Kungfu), and tanglangquan (Praying Mantis Kungfu).

Quan is also a shortened form for quan-tao (pronounced like ch'uan th'ao), which means a set of kungfu patterns or movements. Mihuaquan is often shortened to hua- quan , which means Flower Set.

The Flower Set is a very famous set in Southern Shaolin Kungfu. Many great Shaolin masters in the past, like Kam Foong Chi, the lady Shaolin grandmaster Ng Mui, another Shaolin grandmaster Miu Hean, Fong Sai Yoke and Wu Wai Thean specialized in this Flower Set. Yim Wing Choon was also an expert in this Flower Set, having learnt it from her teacher Ng Mui, and it was likely that Wing Choon Kungfu evolved from this set. 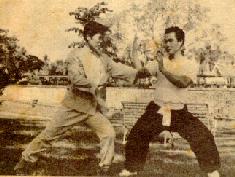 The Flower Set is well known for its fast and deceptive movements. About 25 years ago, I explained this set and some of its combat applications in a Chinese kungfu magazine. A combat sequence with its illustrations is reproduced below.

My student Wong Weng Tuck and I observe each other in our poise patterns, as shown in Picture 1 at the top of this webpage. Weng Tuck moves in with a right thrust punch. I do not move away, but as Weng Tuck's attack is coming I thrust out my left cup-fist at Weng Tuck's jaw using the pattern "Big Boss Offers Wine", with my forward-moving arm brushing away Weng Tuck's attack. This is a high-level counter attack, manifesting the principle of "starting later but arriving earlier". 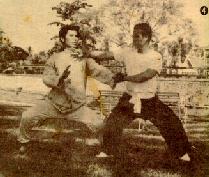 Weng Tuck's attack was a bait; that was why he did not use his left non-attacking hand as a guard, purposely exposing himself. As soon as my cup-fist approaches him, he deftly changes his Bow- Arrow Stance to a Sideway Horse-Riding Stance, thus avoiding my attack, and simultaneously in a smooth sweep, deflects my left hand and strikes my neck with his right palm using a pattern called "Horizontally Sweeping an Army". This time he uses his left hand as a guard. 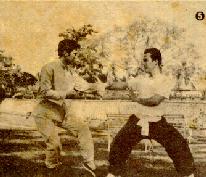 Picture 3 shows the intermediate movement of his sweep, and Picture 4 shows the completion of the sweep -- the movement in the two pictures is executed continuously in a split second. Weng Tuck's counter uses the principle of "running defence and counter-attack in one smooth action".

I move my front leg backward into a False-Leg Stance, "thread" away Weng Tuck's attack according to his sweeping momentum, Picture 5, and immediately move forward again to a Bow-Arrow Stance and strike his solar-plexis with a cup-fist in a second "Big Boss Offers Wine", Picture 6. The two pictures show a continuous movement without any break in between. 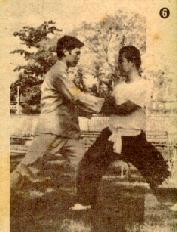 My defence-cum-attack is a smooth flow from Weng Tuck's attack, flowing from his attack as if his attack and my ciounter-attack were the same continuous movement. When this is performed well, Weng Tuck will find himself hit at about the same time when he has completed his attack. This manifests the principle of "striking the opponent when his old strength is spent but his new strength has not been created".

Weng Tuck moves to his right side, "tames" or covers my both arms with his left hand, and simultaneously attacks my left temple with his right "horn punch" in a pattern called "Hanging a Golden Star at a Corner", Picture 7. This is an excellent counter, employing the principle of "no defence direct counter". 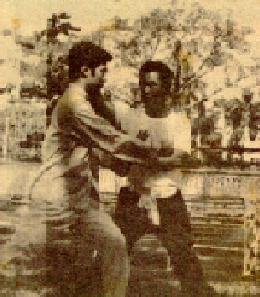 "No defence" here is a misonmer, because his counter-attack already incorporates defence. What is meant is that the exponent using this principle does not have to first defend against a comming attack, and only then counter-attack.

I also use the "no defence direct counter" principle". I squart down, thus avoiding the horn- punch, "tame" Weng Tuck's other hand, and simultaneously strike his groin, using a pattern known as "Squarting Down to Strike a Tiger", Picture 8. In line with the Shaolin teaching on compassion, I will merely tap his groin instead of blasting it. 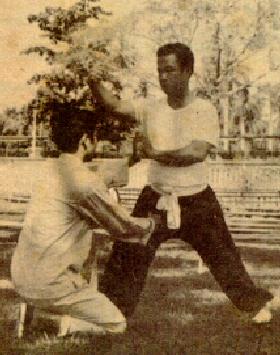 Although this is a short sequence, it is sufficient to show the very high standard of combat found in this famous Flower Set. An exponent well trained in the combat techniques of the Flower Set, applying appropriate tactical principles with high level of skills, can often strike down an opponent almost as soon as the latter initiates an attack.

It is no surprise that many kungfu masters in the past specialized in this kungfu set. Exchanging blows and kicks freely, as is common among many martial artists sparring today, is meant for sport, and would have no place when facing a master in the past like Fong Sai Yoke or Wu Wai Thean. With his speed and internal force, a master could put his opponent out of action with just a single horn-punch to the temple or a cup-fist to the groin.