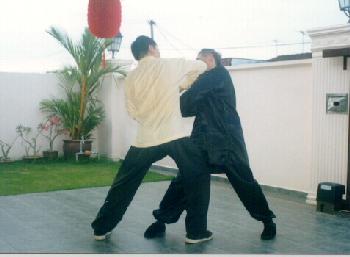 How would a Taijiquan exponent defend against an elbow attack from a Muai Thai fighter? 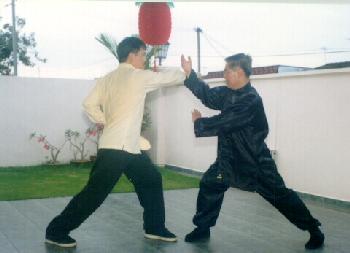 Elbow attacks are very useful in close-quarter combat. Surprisingly, apart from kungfu which of course includes Taijiquan, most other martial systems do not make much use of elbow attacks. Muai Thai is a noticeable exception. In Muai Thai, or Siamese Boxing, elbow attacks are frequently used and very effective.

A Muai Thai fighter seldom uses elbow attacks in a straight-forward manner. He often employs elbow strikes in what is called a "three-in-one" tactic. For example, he starts with a feign punch to your face. As soon as you respond, he moves in swiftly, bends his attacking arm and strikes you with his elbow.

This elbow strike can be "feign" or "real" depending on whether you can counter it. If you cannot counter it, it becomes "real", probably fracturing your cheek bones. But if you can efectively counter the elbow strike, it becomes a "feign" move.

But before you could recover your movements, you may find yourself being pulled forward and downward by his both hands, and your ribs broken by his knee strike.

Even such a brief description of how a Muai Thai fighter fights, may give some idea why most kungfu dancers as well as martial artists whose combat training is a free exchange of kicks and blows, find themselves no match. Besides employing tactics and strategies skilfully, a Muai Thai fighter typically spends a few hours everyday in force training, such as kicking a coconut palm with his shins hundreds of times, and in simulated fighting, such as going over and over again his attacking techniques.

Nevertheless, a Taijiquan exponent -- if he also puts in effort training Taijiquan as an internal martial art -- should be able to put up some decent defence. He may let the Muai Thai fighter completes his "three-in-one" attack, and counter his knee strike with "Golden Cockerel Stands Solitarily" as explained in Taijiquan Defence against Knee Attack .

Or, if he is skilful enough, he can frustrate the "three-in-one" attack by intercepting at the second attack. One way is as follows. 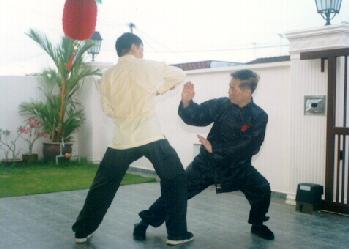 As Goh Kok Hin, posing as a Muai Thai fighter, strikes me with his right elbow, irrespective of whether this attack is "real" or "feign", without moving my legs I shift my body backward to avoid the elbow strike. Immediately I move my body forward, with my right hand pushing away Goh's elbow following his striking momentum, and striking his right ribs with my left palm using a Taijiquan pattern called "Jade Girl Threads Shuttle".

It is also disadvantageous for him to attack me with his other (right) leg. With my both hands close by, as soon as he lifts his right leg I can counter attack with a few alternatives, such as "Repulse Monkey" and "White Horse Spreads Mane". As his left hand is out of the arena, it is also difficult for his to use his left hand to attack me. 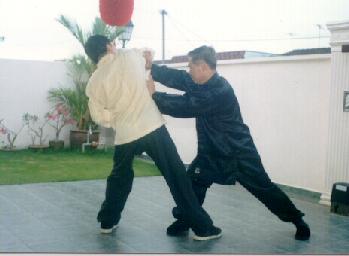