AGAINST BEING HELD FROM THE BACK 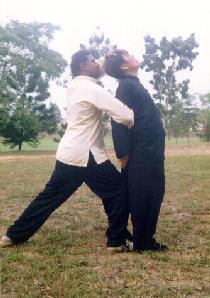 What would you do if an opponent holds your two arms at your back? 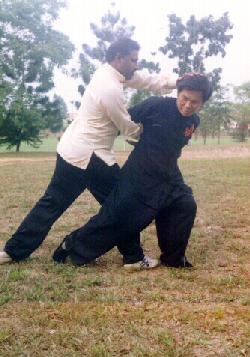 There is a pattern in Shaolin Kungfu known as "Golden Bird Grips Eyebrow" whereby you stand at the back of your opponent pulling his head back above his eyebrow with one hand and gripping both his arms with your other hand, as shown in the illustration above. How wuld you release yourself if you are in such a predicament?

One effective counter is known as "Fisherman Casts Net". Please see the illustration below.

Move your right leg back to a left Bow-Arrow Stance, with your right leg behind the opponent's right "bow" leg. Simultaneoudly move both your arms backward to the left side of your opponent, and turn your head sharply to minimize his grip on your forhead. This action will unbalance your opponent, even monentarily.

Immediately swing your arms from your right side to your left side like casting a net. This will fell your opponent to the ground. 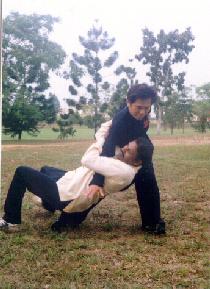 It is significant to note the most important factor in this counter is not the technique, but the exponent's stance. If his stance is not stable, even if he applies the technique correctly, he may not fell the opponent. Here is one example that stances are very important in kungfu.