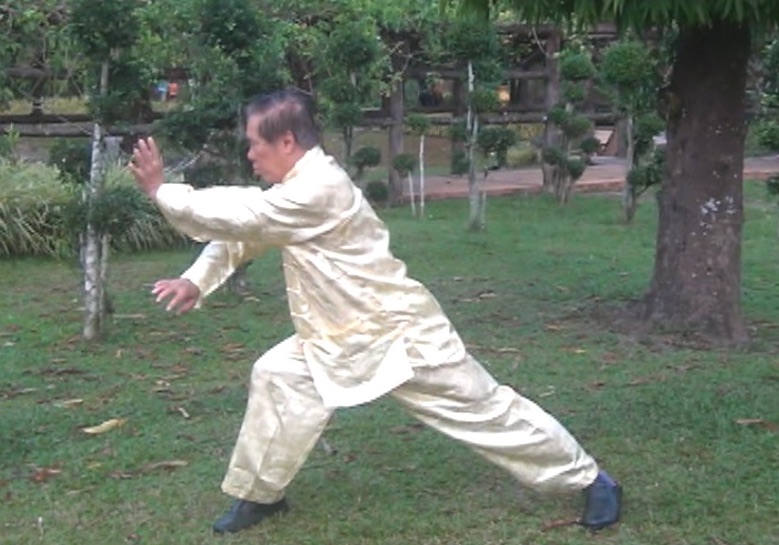 Is there some connection of the Double Tiger Claws and Cloud Hands?

If all things would be equal in terms of progress, who would have the most force, a Shaolin Kungfu practitioner who practices Iron Wire and Double Tiger Claws, and then starts practicing Cloud Hands, or a Tai Chi Chuan practitioner, who practiced Cloud Hands from the start?

Congratulations. Your experience is the result from the benefits of breadth and depth.

You have practiced your footwork, waist rotation and moving in stances so well that your Double Tiger Claws emerge spontaneously. All these techniques complement one another excellent.

Practitioners who only know Double Tiger Claws but have not practiced footwork, waist rotation and moving in stance, will probably perform the Double Tiger Claws from their shoulders instead of from the waist as you do. This will distract both from their application of force as well as combat efficiency.

For example, if a practitioner executes his Double Tiger Claws from his shoulders, he may generate 200 units of force. But if he rotates his waist he can generate 500 units!

Besides force application, rotating the waist also has an advantage in combat efficiency over starting from the shoulders. The Double Tiger Claws are often used to deflect an opponent’s attack with one tiger claw and simultaneously counter-attacking him with the other tiger claw.

You may have a feel of this application of minimum force by doing the following simple experiment. Hold a heavy object, like a table, with both hands. Try to move it by moving your hands issuing from your shoulders. Next, hold the same object with both hands. Move the object not by moving your hands but by rotating your waist. You will find that moving the object by rotating your waist is easier than using your shoulders. This, in fact, is a core principle why in Taijiquan a smaller-sized exponent can defeat a bigger-sized opponent.

The benefit of breadth and depth applies in our school. It may not apply in most other schools. For most other schools, if students practice two opposing force training methods, like Double Tiger Claws and Cloud Hands, at the same time period, they will get less than half the benefit they would get had they focused on just one art. For example, they may get only 120 units of Tiger Claw force and 100 units of Cloud Hands force.

Yes, there is some obvious connection between Double Tiger Claws and Cloud Hands. The physical movements are similar, except that the former uses tiger claws and the latter uses open palms.

I don’t have historical evidence for the origin of Double Tiger Claws. The earliest record of tiger claws I have was in a classic called “The Internal Arts of Shaolin” which I believe was written in the Ming Dynasty (14th to 17th century). It showed the development of internal force employing the Shaolin five animals.

There was mention of the tiger form in Xingyiquan, which was invented by Yue Fei during the later part of the Song Dynasty (10th to 13th century). Claws were used in the tiger form, but they were more like Eagle Claws, and very different form the Double Tiger Claws we use in Shaolin Wahnam. The Art of Tiger Claws was probably established during the Qing Dynasty (17th to 20th century).

On the other hand, I believe that Cloud Hands originated from Zhang San Feng during the later part of the Song Dynasty. After practicing his Shaolin Kungfu, Zhang San Feng entered into standing meditation. Extreme stillness produced movement. Soon chi flow resulted in graceful movements, poetically described as “flowing water floating clouds”, and later shortened to “cloud hands”. These cloud hand movements were stylized into forms which evolved into Taijiquan.

As stated earlier, this does not necessarily mean that Cloud Hands is the least useful because it may have advantages in other aspects over the other arts.

The above comparison applies to our school, but may not apply to other schools. In other schools practicing different arts at the same time usually distracts from one another. Thus, a student who practices all the three arts would have less force than one who practices only Cloud Hands.

But if they practice the three arts as physical exercise instead of as internal force training, both students would not have internal force, but the one who practices all the three arts will be muscularly stronger than the one who practices Cloud Hands. This is because Iron Wire and Double Tiger Claws develop more muscular strength than Cloud Hands.