EXPLODING FORCE FROM THE WAIST AND FROM THE WRIST 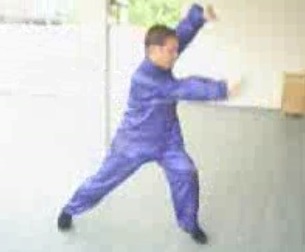 Exploding force from the waist in "Jade Girl Threads Shuttle"

If we wish to train the combative aspects of Taijiquan during solo practice of the "Cloud Hands Grasp Sparrow" set, should we emphasize focusing and exploding internal force from the wrist and shoulders instead of the waist?

During practice of Cloud Hands Grasp Sparrow or any Taijiquan set, when exploding force we should first focus on internal force issuing from the dan tian. This must be executed with the right mechanics, which is excellent described by past masters as “starting from the back leg, rotating the waist, and completing at the hand”.

There are two requirements for exploding force or fa-jing successfully, namely sufficient internal force to be exploded, and the right mechanics to explode it.

Failure to meet one or both of these two conditions is the reason why many martial artists do not know fa-jing, or how to explode internal force, which is regarded as an advanced skill.

On the other hand, even our students in Intensive Taijiquan Course and Intensive Shaolin Kungfu Course can learn fa-jing in just a few days. This is because our students have the two requirements and make use of them when exploding force.

Most martial artists do not have internal force, though many of them can be very powerful with muscular strength. Our students develop internal force from their stance straining, like the Three-Circle Stance in Taijiquan and the Horse-Riding Stance in Shaolin Kungfu. The internal force is stored at the dan tian.

When a practitioner explodes force, he focuses at his dan tian. This set his energy flowing from his dan tian, through his shoulder, through his elbow, through his wrist, and out of his hand, known in kungfu terminology as “internal force going through five gates”. The rotation of his waist sets the energy flowing in spiral. Thus the force he explodes out is spiral force, which is more powerful than linear force like ramming a hardened fist onto an opponent.

If the practitioner focuses at his wrist or shoulder, he may not be able to issue the force from his dan tian. He may generate a spiral movement by following the principle of starting from the back leg, rotating the waist and completing at the hand. But it is spiral mechanical strength, and not spiral force, that hits an opponent.

Indeed, he needs not even have to start from his back leg, rotate his waist and complete at his hand. He just needs to rotate or flex his wrist. Internal force will shoot out from his palm to an opponent.

There is, however, a slight difference. The water used up from the tap is replaced later in the reservoir when there is a rainfall. The energy used up in the strike from the palm is replaced immediately in the dan tian from the Cosmos.

Why is the source of internal force at the shoulder whereas it is at the dan tian for most other kungfu styles?

Indeed, I was thinking of this question for quite some time. Why is the Three-Body Stance asymmetrical? I found the answer while preparing to teach Xingyiquan at the 2013 UK Summer Camp. The asymmetrical structure of the Three-Body Stance, together with the correspondence mode when practicing it, enables energy to be located at the shoulders to be used when exploding force. 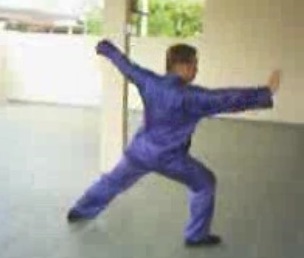 Exploding force from the wrist in "Single Whip"