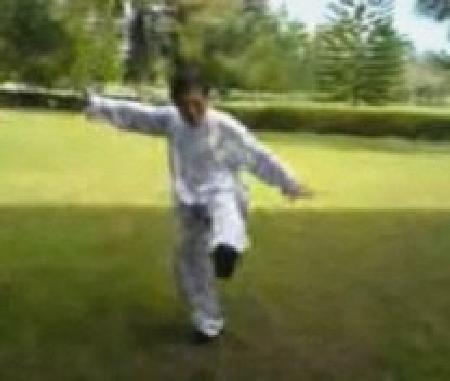 Could you please compare and contrast the sets "White Crane Flaps Wings" and "Cloud Hands Grasp Sparrow" and elaborate a little on where each set fits in to the wonderful Art of Wahnam Taijiquan?

A good conceptual framework for a comparison and contrast of the two sets is to use the four factors of from, force, application and philosophy. Why do we use these four factors?

The form of “White Crane Flaps Wings” is from Yang Style Taijiquan but the arrangement of the patterns is such that the set can be performed fast like Shaolin Kungfu, thus giving it an appearance of Chen Style Taijiquan.

The individually different patterns of both sets are listed below, with a $ sign after those patterns that are not found in the other set.

In “White Crane Flaps Wings” the structure of the set is a north-south movement. After performing the right and the left mode of Grasping Sparrow’s Tail, a practitioner who starts in a central position facing north, moves north, then turns around and moves south, turns around to move north diagonally, then retreats southward to compete the set. This structure is typical of Southern Shaolin sets.

In “Cloud Hands Grasp Sparrow” the structure of the set is a east-west movement. A practitioner who starts on the right side facing north, moves from east to west, retreats from west to east, moves from east to west again, turns around to move from west to east, and again turns around to move a short space to the west to complete the set. This structure is typical of Taijiquan sets and Northern Shaolin sets.

In terms of form, both sets fit in very well with our Wahnam Taijiquan, though there is some difference in the purpose of our teaching and benefits for our students.

“Cloud Hands Grasp Sparrow” is excellent for our purpose of teaching Taijiquan form. The arrangement of the patterns in this set is such that the patterns can be performed flowing and gracefully, which is typical of Yang Style Taijiquan, and which is also what many people conceptualize Taiijiquan to be. Students have a lot of practice in and therefore benefit much from important Taijiquan principles like “starting with the back leg, rotating the waist, and completing in the hands” and “no beginning no ending”.

If the two sets were practiced not as genuine Taijiquan but as Taiji dance, its gentle, flowing patterns make “Cloud Hands Grasp Sparrow” more advantageous for health and longevity. The tensing of muscles to produce muscular strength in some patterns of “White Crane Flaps Wings” may cause some energy blockage.

It should be noted that the comparison is relative. When practiced as genuine Taijiquan, “Cloud Hands Grasp Sparrow” also brings good health, vitality and longevity. It can be fast, hard and powerful too.

Both sets are complete in combat application. Not only both sets can be used to defend any attack, they also incorporate all the four categories of attack, namely striking, kicking, felling and chin-na.

“Cloud Hands Grasp Sparrow”, known by its more common name of 24-Pattern Simplified Taijiquan, is a widely practiced set by many people all over the world. The majority of them, however, practice it like a dance, with nothing internal and nothing martial. They are unlikely to know the combat application of any pattern in the set -- not even in simple punches and kicks, like “Punch Below Sleeves” and “Cross-Hands Thrust Kick”.

Bu these techniques, which were straight-forward initially, had evolved over time to be sophisticated, and are more effective for combat if practitioners know their combat application and have the skills to apply them.

On the other hand, “White Crane Flaps Wings” was composed by me, and is therefore unknown outside our school. But the combat applications of some of its patterns are more easily discernable, even by Taiji dancers. “Bow-Arrow Thrust Punch’ and “Side-Kick” obviously are for punching and kicking opponents.

There are many felling and chin-na techniques in Taijiquan, and also in these two sets, but they are hidden in the open. “Black Bear Sinks Hips”, “Fisherman Casts Net”, “Repulse Monkey” and “Wild Horse Separate Mane”, for example, are felling techniques. Shaolin Wahnam students would not fail to notice that “Carry Tiger Back to Mountain” is excellent for felling opponents, though many other people may not realize it is a formidable felling technique.

Examples of chin-na techniques include “Double Dragon Plays with Pearl”, “Push Boat According to flow”, “Play the Lute” and “Old Eagle Catches Snake”.

As the level of combat today is quite simple, the more direct applications of “White Crane Flaps Wings” are relatively more useful for us in today’ combat situations, which are not complex enough to warrant the need of sophisticated applications of “Cloud Hands Grasp Sparrow”.

Both “White Crane Flaps Wings” and “Cloud Hands Grasp Sparrow” were created to meet expedient needs. In the 1970s the Chinese government promoted kungfu, known as wushu, as a sport. There were seven categories for competition, which was based solely on demonstration. Taijiquan was one of the categories, the other six being Changquan or Long Fist, Nanquan or Southern Fist, Daoshu or Sabre Techniques, Jianshu or Sword Techniques, Gunshu or Staff Techniques, and Jiangshu or Spear Techniques.

Taijiquan masters were invited to come together to compose a set for the wushu competition, and the result was the 24-Pattern Simplified Taijiquan Set.

Although this set was initially meant for competitors to perform as solo demonstration in wushu competitions, I found it contains of all important Taijiquan patterns and philosophy. Hence, when I first taught Wahnam Taijiquan in our school in the early 2000s, I used this set as the base.

After the Tai Chi Chuan Festival in Saint Petersburg in Florida in November 2012, this set was renamed “Cloud Hands Grasp Sparrow” as its original name, “24-Pattern Simplified Taijiquan”, might be misleading. It was called “24-Pattern” because there were 24 individually different patterns. It was called “Simplified” because it was simplified from the well known 108-Pattern Yang Style Taijiquan.

In “Cloud Hands Grasp Sparrow” practiced by us in Wahnam Taijiquan there are 28 individually different patterns. This is because “Black Bear Sinks Hips” and “Fisherman Cast Net”, which are found in both our set and the original set, are counted as two separate patterns by us as they have important combat applications of their own, but not counted as separated patterns in the original set because they are regarded as transitional movement for “Open Window to Look at Moon” and “Single Whip” respectively. In Wahnam Taijiquan we also do not regard this set as simple as it contains some sophisticated techniques and philosophy.

In regional courses where students wished to have a taste of Taijiquan but there was insufficient time to teach it at some depth, I taught them Grasping Sparrow’s Tail. At the VIP Taijiquan Course in Villa de Leyva, Columbia in September 2005, I added a few patterns of Green Dragon Shoots Pearl and kicks to form a set called “Cloud Hands”, so that the participants had a complete set to practice.

When I formulated the 12 levels of Taijiquan for the core syllabus of our Wahnam Taijiquan training, which correspond to the 12 levels of Shaolin training, I further added a few more patterns to “Cloud Hands” so that the set was complete with all the four categories of attack and defence. The new set was called “White Crane Flaps Wings” and it became the fundamental set for Wahnam Taijiquan training, corresponding to “Lohan Asks the Way” in Shaolin Kungfu.

Both “White Crane Flaps Wings” and “Cloud Hands Grasp Sparrow” are excellent sets in Wahnam Taijiquan. They contain all important Taijiquan patterns and provide a sound understanding of Taijiquan philosophy.

Wahnam Taijiquan students practicing either set will learn the fundamentals of Taijiquan, like basic stances, footwork, waist rotation, breath coordination, six harmonies, flowing movement and exploding force. They will also learn combat applications covering all the four categories of attack and defence, as well as important Taijiquan principles like “using mind and not using strength”, “no beginning and no ending”, “using minimum force against maximum strength”. 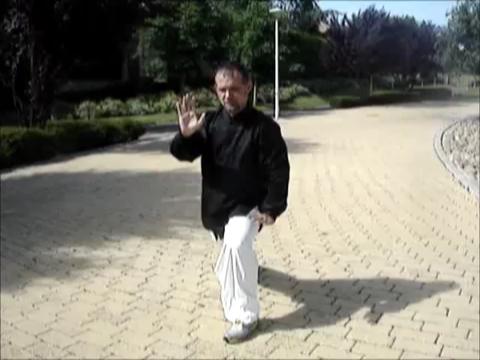