SECRETS FOR TRAINING IN THE 13 TECHNIQUES 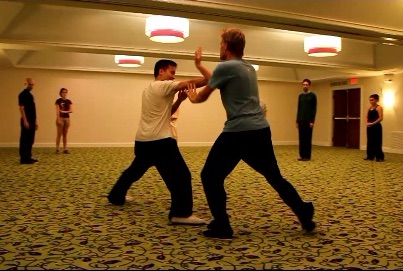 Ward-Off, one of the Eight Techniques

Andrea's question reminds me of the Song of Secrets for Training in the 13 Techniques.

I'm interested to know how Sifu's understanding of this classic has changed over time and how that understanding has influenced Sifu's practice, advancement and teaching of Taijiquan, as well as all types of Kung Fu. In particular I'm interested in these two lines: "All the time pay attention to your waist, the abdomen is charged with chi and might" and "What is the aim of Tai Chi Chuan practice? Health and vitality and eternal spring".

The “heart-attainments” of past masters, which may be translated as the essence of their teaching, are recorded in classics, often in what are called “kor kiut” or songs of secrets. The secrets are hidden in the open and coupled with the conciseness of the classical Chinese language and the need to have background knowledge of kungfu terms, many people may not understand the classics even when they know the dictionary meaning of all the words used in the songs of secrets.

Song of Secrets for Training in the 13 Techniques

Don't underestimate the thirteen techniques, the source of life is at the waist
Pay attention to 'apparent' and 'solid', without hindrance chi flows with grace
Stillness in movement, movement in stillness, adjust according to what the situation is
Every technique must be guided by will, combat efficiency will be achieved with ease
All the time pay attention to your waist, the abdomen is charged with chi and might
The spine is straight and full of spirit, the whole body is relaxed with head upright
Be attentive to details in every move, spontaneous let your movements be
A teacher's guidance is needed to enter the way, when accomplished, unrestricted the rules is he
What is so difficult about the form? Mind and energy are the king
What is the aim of Tai Chi Chuan practice? Health and vitality and eternal spring

Before answering the questions posed, it would be helpful to have a brief explanation of the “Song of 13 Techniques” as follows.

The thirteen techniques refer to eight techniques and five footwork movements from which Taijiquan evolved.

The eight techniques are

The five footwork movements are

The source of Taijiquan movements is at the waist. For example, when a Taijiquan practitioner wards off an attack, he does not merely moves his hands from his elbow, but he starts his movement by rotating his waist.

In Taijiquan combat it is important to note whether an opponent’s movement is apparent, which means feint, or solid, which means real. He may, for example, feint a top movement with his hand, and when you attempt to response to this hand movement, he may kick you below, which is his real attack. However, if you neglect the feint movement, it may change to be a real attack.

This distinguishing of whether opponents’ movements are feint or real should not interrupt your chi flow and fluid bodily movement. On the other hand, when you make feint and real movements, the movements must also be smooth, and not staccato, so that your opponents may not differentiate them.

You should attain the harmony of stillness and movement. For example, when you move about vigorously, your mind is still. When you mind is active, you are relaxed and composed. You are able to adjust quickly and spontaneously to whatever the situation is. When an opponent rushes at you with multiple attacks, you remain relaxed and response accordingly. If your opponent remains still, you may make feint movements to distract him.

Every movement you make is purposeful. You do not make unnecessary or wasteful movements. In this way you attain combat efficiency easily.

All your movements issue from your waist. Your chi is always powerful and focused at your dan tian. You have good posture and good balance and presence of mind. Your whole body is relaxed and always ready for action. Your movements are spontaneous, and perfect in details.

A competent teacher is necessary to initiate you into genuine Taijiquan. At the beginning rules and guidelines speed up your progress. But when you are advanced, you would not be restricted by rules.

Although perfect form is important, you should not be unduly worried over the form. Mind and energy are the most important in Taijiquan. What is the aim of practicing Taijiuan? It is to attain good health, vitality and longevity.

Before my understanding of the classic, my performance of kungfu was more external and head-on when responding to opponents’ attacks. An excellent example is my changing of “Beauty Looks at Mirror” to “Single Tiger Emerges from Cave” when responding to an opponent’s thrust punch in the basic Shaolin combat sequences.

This change was not influenced by any specific line in the “Song of 13 Techniques”, but by the general concept in Taijiquan of “using minimum force against maximum strength”. This concept was also applied in the Mirror Hand defence, but more so in Single Tiger.

After the understanding of the classic, changes continued to improve both my own performance and my teaching.

The line, “the source of life is at the waist”, for example is seminal. It helped to illustrate the essence of Taijiquan mechanics, leading me to understanding that even without internal force, Taijiquan could be used by a smaller-sized person against a physically stronger and bigger opponent.

The next advancement was in reducing big movements to smaller ones. which participants at my Intensive Taijiquan Courses would have experienced, and which resulted in increasing speed and combat efficiency. A further development was exploding force from the wrist instead of from the dan tian. All these developments could be traced to the line “the source of life is at the waist” from the Song of 13 Techniques.

The line “without hindrance chi flows with grace” was also very influential. Before understanding this line, my Taijiquan movements were graceful but still physical. After understanding it, I was able to generate energy flow, then internal force with my Taijiquan practice.

The benefit spilled over to other styles of kungfu. My Shaolin Kungfu became smooth and flowing. Some of those who attended my Intensive Shaolin Kungfu Course would have remember me telling them to perform Shaolin Kungfu movements as if they were Taijiquan.

In Wuzuquan it enhanced the development of internal force in San Zhan, a skill I took more than two years to acquire in the late 1960s, but which with the help of chi flow course participants at the Special Wuzuquan Course in Penang in December 2012 could acquire in a matter of days!

In the Baguazhang Course in June 2012, chi flow not only helped course participants to develop internal force using the eight mother palms but also move fast and effortlessly in Baguazhang Circle Walking. It even enhanced consolidation of internal force in such a powerful set as Iron Wire.

These developments in Taijiquan as well as other kungfu styles owed much to the line "All the time pay attention to your waist, the abdomen is charged with chi and might" of the Song of 13 Techniques. Paying attention to waist rotation not only has made all our kungfu movements very elegant, and enabled us to exploit the momentum of our opponents, but also has remarkably enhanced our generating and exploding spiral force.

The line “What is the aim of Tai Chi Chuan practice? Health and vitality and eternal spring" has helped to shape the basic philosophy of our school regarding why we train kungfu and chi kung. While students of many other kungfu schools hurt themselves physically and psychologically in their free sparring practice, and students of many other chi kung schools focus on learning and demonstrating chi kung techniques, we are very clear that the priority of our kungfu and chi kung training is to have good health, vitality and longevity. 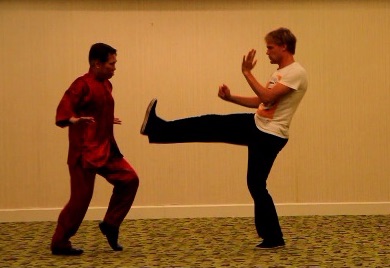 Remain at Centre, of the Five Movements