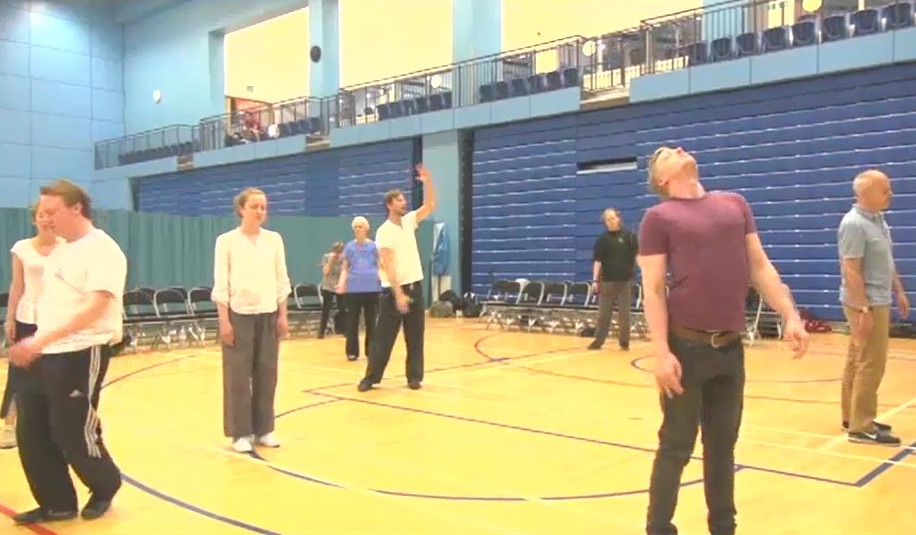 I would like to have Sifu's advice on how to teach older or more infirm students. My approach now is to take things very slowly and making modifications when necessary. When they are stronger, I will get them to train the standard mode.

However, I am not sure if this is the best way to teach. As they are progressing very slowly, it is also easy for them to get bored, so I have to teach some of the syllabus in advance to keep things interesting, even though the foundation may not be there.

Although this does not apply to you, a good kungfu or qigong teacher must take care not to appease his students. This, I believe, was a main reason why some excellent teachers in the past acted tough on their students though in their heart they were soft and kind.

I often use this approach, and without fail it always brings excellent results for those who follow my instructions. When Peter and Gillian, who were already 2nd dan black-belts in Taekwondo, first learned Shaolin Kungfu from me, I taught them only the Horse-Riding Stance and asked them to practice it daily.

Gillian complained to her mother that other students were very lucky; they learned how to fight in a five-day course. The mother told her that she was very lucky as I was teaching her the master's way. True enough, a year later when I saw Gillian again, she had developed so much internal force from her stance training that learning Shaolin Kungfu was a matter of picking up some useful techniques. She became so powerful that would-be assailants were hurt when she gently tapped on them.

A young woman was run over by a truck. Although the surgeons did an excellent job fixing her crushed pelvis, they were doubtful whether she could ever be normal again. When her father invited me to give her qigong healing in the hospital, she said she was uncertain of this "voodoo". I gave her a severe thrashing -- verbally -- so much so that she became an obedient student. She was on a walker then, unable to stand on her own feet. I told her to walk out of the hospital within a week. She did -- without the walker. She later graduated in medicine herself, and is now happy and healthy.

If you treat your older and weaker students as old and weak, they will remain old and weak. Tell them to become young and strong, despite their age and infirm condition. Of course they do not become young and strong over-night, or even in a month or two. If they are 60 now, or have to pause a few times to rest while going up a slope, tell them that in a year's time they will feel and look like 55, and be able to walk up a slope briskly without panting.

We do not just set the vision and the direction, but also provide the tools with which the students work on to achieve their goals. If they just travel on, i.e. practice correctly every day, arriving is a matter of time.

When he first starts, we do not expect him to bounce about like his young classmates at 20. If his classmates can sit low at a Horse-Riding Stance for 10 minutes, due to his age or infirmity, he may not be able to sit as low or as long. Let us graduate the levels from standing upright to sitting at the stance at perfect height as 1 to 10. His younger classmates may be at 6 for 10 minutes, whereas he may be just at 3 for 4 minutes.

Now, we do not tell him to sit at level 3 for 4 minutes throughout his kungfu training. We tell him that is his starting point, but with correct daily practice after some time he should be able to sit at level 6 for 10 minutes. We also teach him supplementary exercises to loosen his tight muscles.

Let us suppose he needs 8 months of daily practice to reach the first attainment of level 6 for 10 minutes, and another 4 months to reach the second attainment of level 10 for 15 minutes, whereas his younger classmates can reach this attainment after only 5 months. Well, this is the price he has to pay for a weak start. He has to put in more time and effort to attain the same results of those who have a better start, and this is well expressed in some excellent advice I learned from my father years ago, namely "cheong kern poh khuit" (Cantonese), which means "use diligence to compensate for weakness".

But the significant point is that after 8 months of daily practice, this elderly student will be as good as young people at 20, and after a year he will be better than them. In other words, if old and infirm students faithfully follow our training programme, in a year's time they can be fitter and healthier than many young people today!

One year is a reasonable time to expect them to have remarkable progress. It is in fact a conservative expectation. In my Intensive Chi Kung Course now and some of my regional Sinew Metamorphosis courses, students who are elderly and who may not have run for a long time, can run round the training hall about ten times, which is about the distance round a football field, without being tired and without panting! Most young people today will be panting and tired running half a football field.

The above is taken from Question 3 of September 2003 Part 3 of the Selection of Questions and Answers.