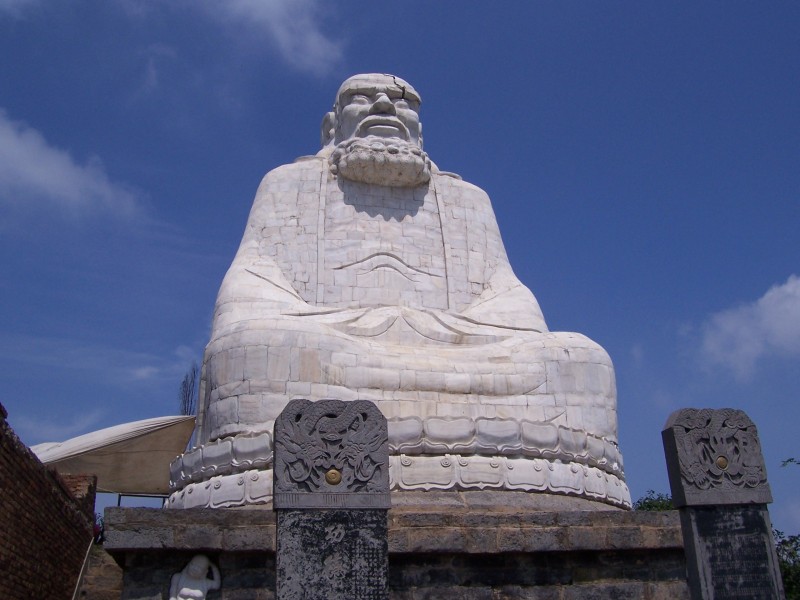 Budhidharma, the First Patriarch of Zen

Sigung, a question about Zen came up in class with Sifu Anthony Korahais, and we decided that it would be a good question to ask you. Does Patriarch Zen train the skill of one-pointed mind? Or are Patriarch Zen and Tatagata Zen totally separate techniques?

Patriarch Zen and Tatagata Zen are two different techniques or apporoaches, but they are not totally separated. In fact they are closedly related.

There are countless techniques for meditation, but they may be classified into two main categories, namely to attain a one-pointed mind and to attain no mind, which actually means all mind. In mathematical terms, all meditation may be reduced to one or zero.

A person's mind is full of thoughts all the time. By disciplining his mind through meditation he may reduce the countless thoughts to just one. There are many techniques to achieve this purpose, but all of them apply the principle of "using one thought to tame hundreds of thoughts". Some examples are focusing on the dan tian, focusing on an external object like a pebble, focusing on one's breath, reciting a line of a scripture or reciting some meaningless sounds.

In Buddhist meditation the most famous technique is focusing on the breath. This was taught by the Buddha himself. When an aspirant can successfully focus on his breath to the exclusion of all other thoughts, his mind becomes one-pointed. This process is known as Concentration.

He then progresses to Contemplation. He uses his concentrated mind to contemplate on a chosen topic. In Buddhist meditation he may contemplate on his physical body or contemplate on life. With his one-pointed mind he investigates further and deeper into whether his body is real or what life really is.

Eventually he discovers experientially, not just intellectually, that his body, life or anything else is actually "empty". At earlier levels, this is a satori, a spiritual awakening. At the supreme level, this is Nirvana, or Enlightenment, called variously by people of different cultures as returning to God, attaining the Tao or merging with the Great Void.

This is the approach or tradition taught by the Buddha, and is used in most Buddhist traditions. Hence it is called Tatagatha Zen. "Tatagatha", a Sanskrit word meaning "thusness" or "everything there is", is a title addressed to the Buddha. Most other spiritual disciplines also use this approach.

Tatagatha Zen takes a long time, often many life-times. In Zen Buddhism, an aspirant aims to attain Enlightenment here and now. Instead of reducing countless thoughts to one thought, and then using the resultant one-pointed mind to realize "emptiness" or no mind, he aims at no mind straight-away. No mind is attained through non-thought.

Non-thought is different from no thoughts. In non-thought, thoughs do not arise in the first place. In Western terms, originally there is God, and only God.

In "emptiness", or the transcendental Cosmic Reality, there are no thoughts. If there are thoughts, the transcendental Cosmic Reality will be transformed into the phenomenal world. In Western terms, in God the Holy Spirit there is nothing else, only God. When there are thoughts, the undifferentiated Divine Energy will be transformed into countless phenomena resulting in countless worlds.

This approach or tradition to attain no mind straight-away is Patriarch Zen. "Patriarch" here refers to Bodhidharma, the First Patriarch of Zen, who advocated this method.

Later, Hui Neng, the Sixth Patriarch, expounded on this method. He explained that Nirvana and Samsara, or transcendental Cosmic Reality and the phenomenal world, are the same. The difference is due to thoughts. When there are thoughts, Nirvana is transformed into Samsara. When there are no thoughts, Samsara returns to Nirvana.

In modern scientific terms, when we experience energy through our sense-organs, we see our phenomenal world. If we break through all our human limitations, in a thought-experience for example, we perceive an undifferentiated spread of universal energy.