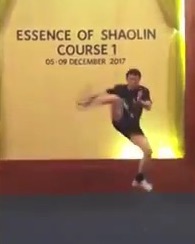 I had a couple of sparring sessions with one of my seniors, and the result was laughable, to say the least. He has a background in tournament kickboxing, and one of his specialities is his roundhouse kick, in which his primary weapon is his shins. He has hardened them to the point of his being able to break 2 or 3 baseball bats with a single roundhouse kick. His target is the opponent's thigh or ribs.

I recently read from a book which says that one of the only sure ways to block such a kick is to use either the shins or the forearms. Going back to my point above on my fear of pain, I have resorted to doing my own forearm and shin hardening exercises (hitting my forearms against trees, hitting my shins with a bundle of canes), so that I can confidently block the strikes without fear of pain or fracture! Do I really have to do this?

No, you don't have to do this. The advice given by the book you mentioned, is both unwise and incorrect. You must use appropriate medication in the way you harden your forearms and shins, otherwise you may have adverse effects.

Your senior's dedication to his training is admirable, and his ability to break two or three baseball bats with a single roundhouse kick is remarkable. Nevertheless, convey to him my advice that he should apply some medication, such as “tit da jow”, or medicated wine, nightly to his injured shins. A better alternative is for him to train chi kung to clear away blockage at his legs. Otherwise the sustained injuries in his legs will affect his health in later life.

Using your shin or forearm to block a roundhouse kick that can break two or three baseball bats executed by someone who specializes in such a kick, is to offer your bones to be broken. If you wish to block the kick, use an iron bar. Hold the upper end of the iron bar with your right hand, with the right thumb below, and the lower end with your left hand, with your left thumb above.

As the attacker kicks at you with a right roundhouse kick, thrust out the vertically held iron bar to meet the kicking leg — and hope that the iron bar is stronger than three baseball bats. Immediately, let go of your left hand, and with your right hand swing the iron bar downward onto the attacker's right collar-bone. Make sure you do not hit his head with the iron bar, otherwise you may kill him.

But when you spar with your senior, you would not want to break his leg or collar bone with the iron bar. Then, how are you going to block his roundhouse kicks. Don't block them! As he kicks, squat down low, use one hand to “float” the kicking leg, and with the other hand, drive a leopard punch into the knee of his standing leg. Despite his powerful shins, one leopard punch strike at the knee may dislocate it and put him out of action. So be careful not to hurt him; just give him a gentle tap.

Alternatively, as his roundhouse kick approaches, shift your body backward into the Front-Arrow Stance to avoid the kick. Then, brushing away the kicking leg, shift your body forward into a Bow-Arrow Stance, and drive a leopard punch into his ribs. Of course, in reality you will stop your punch an inch from his body.

Thirdly, as the roundhouse kick approaches, move a small step diagonally forward on the other side, and execute a thrust kick at his abdomen.

It is important to realize that merely knowing these techniques is insufficient. You must have correct timing and spacing, and be able to execute the techniques smoothly and with some force. This comes from systematic training.

Nevertheless, in your case where you may not have a living instructor to teach you these skills, the following procedure may be helpful. First, practice the techniques on your own, paying attention to correct forms, especially the stances. Practice each technique at least 30 times a day, everyday for about a month. Then ask someone to attack you with a roundhouse kick — slowly and gently at first, then fast and with force later on — for you to apply these techniques on him. Of course you must not hurt him.

Then continue to practice on your own but with an imaginary opponent for another two months. You will then be quite competent in handling roundhouse kicks.

You can apply the same procedure to other types of attacks, like Boxing jabs, Karate punches, and Judo throws. Such type of combat training is called “san-shou” or “miscellaneous techniques” in kungfu terminology.

The above is taken from Question 10 May 2003 Part 2 of the Selection of Questions and Answers.