IS WUSHU THE SAME AS KUNGFU? 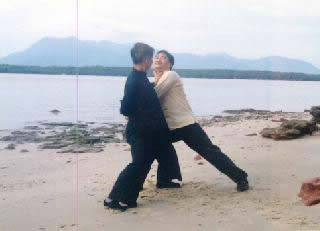 There are wushu instructors who insist that their art is also directly from the Shaolin Temple. Without a genuine point of reference such as that which you can provide, many enthusiasts will also be mistaken. I know that these instructors are wushu exponents because they confirm their adequacy by mentioning their membership in wushu teams in mainland China, bronze medal awards, etc.

Modern wushu is not Shaolin Kungfu. About the 1960s the Chinese government gathered together some kungfu masters of various styles with the objective of synthesizing the various styles into one uniform style, which is today's modern wushu. Prior to that, there were numerous kungfu styles like Lohan, Praying Mantis, Eagle Claw, Chaquan, Huaquan, Hoong Ka, Wing Choon, Hsing Yi, Pa Kua, etc. After that, there was to be no differentiation into these various styles, only wushu.

Wushu was invented solely for sports, and never as a martial art. For the purpose of competition, wushu was divided into seven categories, namely:

The sole criterion for the award of points in all wushu competitions is how graceful and elegant the performance is, and never how well a performer can defend himself or how much internal force he has.

The wushu instructors were quite right to say that wushu was derived from Shaolin Kungfu because except for Taijiquan and aerobatic movements, virtually all wushu movements were taken from Shaolin Kungfu. But their statement is misleading, as their nature and purpose are very different.

Also, a kungfu master insisted that Chinese martial arts are all called wushu; kungfu is only a Cantonese term meaning hard work.

From one perspective he is right, but from another perspective — the one we are using now — he is wrong. The sameness or difference between kungfu and wushu has confused many people, but the following explanation will clear the confusion.

Kungfu, used in the sense of Chinese martial art, has many terms in the Chinese language. The present official term is "wushu". Besides this term, another term that is most commonly used for what in the West would be conceptualized as "kungfu" is "quanfa", often shortened to "quan". Thus, Shaolin Kungfu is "shaolinquan" or "shaolin wushu" in Chinese, and Tai Chi Kungfu is "taijiquan" or "taiji wushu".

It is also true that in Cantonese, as well as many other Chinese dialects including Mandarin, "kungfu" literally means "work". But today when a person uses the word "kungfu", he usually means "martial art", using the term "kung-chok" for "work".

Reproduced from Questions 2 and 3 in Selection of Questions and Answers — January 2000 Part 3.