OVERCOMING SPINE OR BACK PROBLEMS 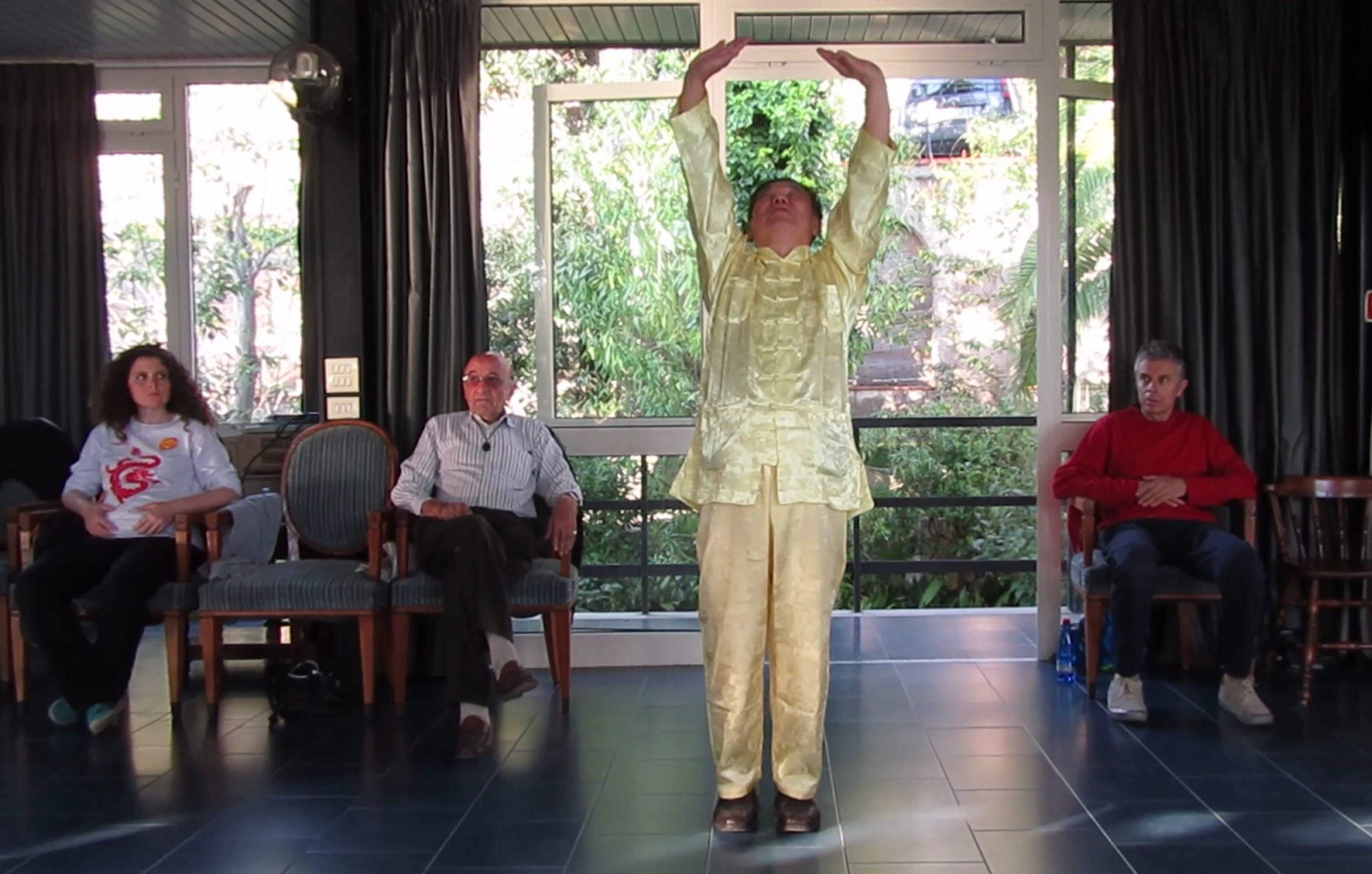 Lifting the Sky -- a wonderful exercise in chi kung

I have a three year old spine/back injury. As a result my lower and mid spine are pulled off center, affecting my sciatic nerve and overtime became a problem for spine alignment. Is there a form of marital arts or qigong that can correct such a spine/back injury?

Yes, many of my students have overcome problems like yours. I shall describe just two case-histories, which were more serious than yours, one case many years ago when I first started teaching chi kung publicly, and the other more recently when I taught chi kung overseas.

Mr Chua from Malaysia, about 70 years old, had a spine injury that made him look pathetic. He was doubly bent. If you looked at him from one side, he was constantly bent forward at an angle of about 30 degrees at his upper back. He could never stand upright. If you look at him from the front, his body was constantly shifted to the right at the chest level.

At that time I taught chi kung in regular classes, i.e. once a week for a course of six months. My teaching then was vastly different from what and how I am teaching now. I taught many patterns, the Eighteen Lohan Hands, mainly at the physcial level, and students had to repeat each pattern many times. After repeating a few patterns many times for about four or five months, students were able to generate a chi flow.

To get the best benefit from my teaching, Mr Chua attended both my classes at Georgetown and Bukit Mertajam, though I taught the same material at these two towns. After completing one course, he would repeat the same course. He also practiced twice a day at home, as advised by me. His diligent practice paid off well. About a year later, his deformities disappeared. He became pain free and was able to happily stand upright.

This happened about 20 years ago, but I can remember his case very well. He is an inspiration. Not only he overcame his problems but he demonstrated great faith in the ability of chi kung to overcome what modern medicine considers an impossible task.

The second case was more recent, when my teaching methodology had improved tremendously. Over the years I mproved from teaching 18 patterns in 6 months to teaching just 3 patterns in 8 hours, and students could generate a chi flow within the 8 hours instead of after 4 or 5 months as before! The speed-up was in the teaching. Students still needed to practice daily for a few months before their illness was overcome.

Many students overcame back and spine problems. One such student was Vincente from Servilla, Spain. His vertebrae were fused, and he could not turn nor bend his body. He moved like a robot.

Vintente attended my one-day chi kung course and went into vigorous chi flow movements that could have shocked his specialist doctor. While in chi flow he would bend forward and backward with sounds as if bones were crashing. Nevertheless he felt fine during the chi flows. After about 9 months his vertebra problem disappeared. He could move about like a normal person!

His doctor was surprised. She said that this could not happen, but it did. so she herself took a course from me to find out, and was much impressed. Needless to say, many of Vincente's friends who had similar problems took my courses too.

The above is taken from Question 2 of September 2007 Part 1 of the Selection of Questions and Answers.