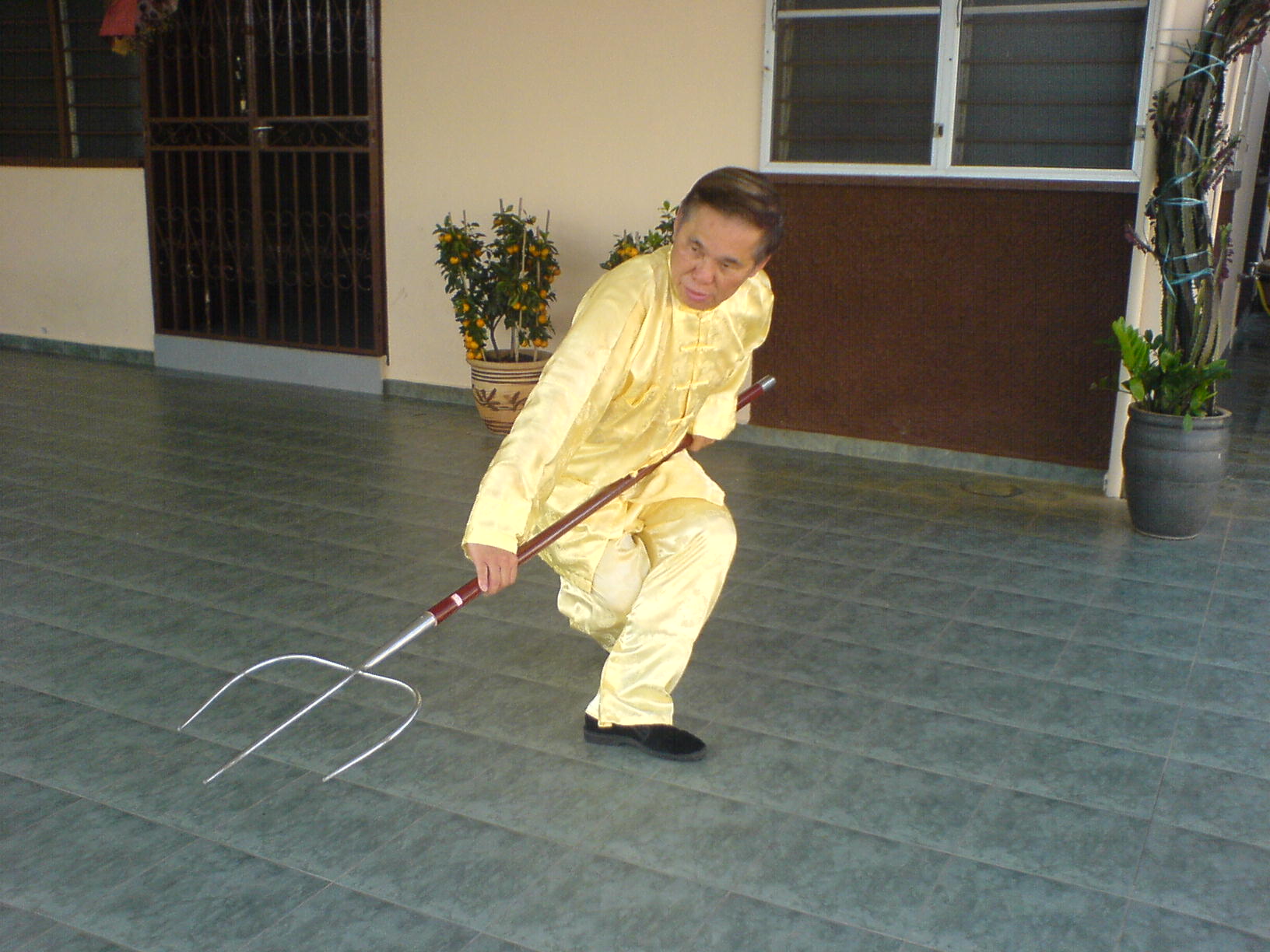 Sifu, we learned the following sets during the Intensive Weapons Course:

Since then, Sifu has taught a variety of other weapon sets, such as the Human Character Butterfly Knives.

What are the characteristics and essence of each of the weapon sets? How will the training of each enhance our daily life, work and play?

Here is a brief description for each weapon.

The Ho Family Flowing Water Staff is one of the four most famous staffs in kungfu but is little seen because it is kept as a secret. Indeed, my sifu, Sifu Ho Fatt Nam, was the one who first taught it to non-Ho family members.

The staff is considered the mother of weapons because all the characteristic techniques of commonly used weapons are found in the staff. It is also a compassionate weapon as possessing no cutting edges it does not cause devastating damage though it can still be very damaging if the exponent wants to.

The techniques of the Ho Family Flowing Water Staff look simple, but are actually very profound. Its main technique is the thrust, reminiscent of the spear from which it originated. It will seem unbelievable, but this technique, used in a pattern like "Yellow Dragon Emerges from Cave" can be used to counter any attack!

An invaluable benefit which can be used to enrich our daily life is its profundity in simplicity. Once we have understood the philosophy behind the profound applications of its simple technique, we can transfer the same principles in many situations in daily life. For example, if a rude person makes a sarcastic remark on you, you can turn the sarcasm on him by a subtle swift of angling.

The single knife or saber is a common weapon used by ordinary soldiers and guards. It is devastating and appearing very threatening to unskillful opponents.

The Shaolin Plum Flower Single Knife is a famous weapon set. It consists of many sophisticated techniques, which are also beautiful in demonstration. It is an interesting contrast to the Ho Family Flowing Water Staff -- one is elaborated but relatively straight-forward and the other is simple but profound.

The main characteristic techniques of the saber are cutting and slashing. An exponent pressing in with systematic cutting and slashing can be very formidable to many people. But if you understand their strength and weakness, it is not difficult to counter these threatening attacks.

This is a good lesson for daily life. Situation that appears formidable and threatening can be overcome and turn to your advantage if you have the knowledge and skills. For example, today many people feel threatened with losing their livelihood, but if you are knowlegable and skilful you can turn the situations to your advantage.

While the saber is the common weapon of ordinary fighters, the sword is the weapon of masters. Unless one is skilful, the sword would not be useful. But in the hands of a master it is an amazing weapon.

The Shaolin Traveling Dragon Sword is as beautiful to watch as it is effective in combat. Its characteristic techniques are the thrust, the sweep and the flick. It needs much presence of mind and agility to use a sword skillfully.

A sword is dainty, which is both its strength and weakness, depending on one's skill or the lack of it. How would you, for example, use a dainty sword to counter a long weapon like a spear or a heavy weapon like a Battle Axe attacking you?

This knowledge and skills can be transferred to enrich our daily life. Suppose someone with far-reaching influence or is a heavy-weight in society is attacking you. With the knowledge and skills learnt form the Shaolin Traveling Dragon Sword, you can counter him elegantly.

While the staff is the mother, the spear is considered the king of weapons. This is because, if all other things were equal, a spear thrust is the most difficult technique to counter.

The characteristic technique of the spear obviously is the thrust. A spear thrust is quite sophisticated, it can go round a weapon that attempts to thwart it. It can also be withdrawn easily, and then shoots out like a bullet.

Focus and precision are two required skills for a successful spear thrust. Transferred to non-combat situation, these skills can certainly enrich our daily life. Many people are unsuccessful in business or profession because they lack focus. Many people miss opportunites because they lack precision. Practicing the Traveling Dragon Thirteen Technique Spear can help them overcome these weaknesses.

Guan Yu, a great warrior of the Three-Kingdom Period, was famous for the use of a weapon called the Big Knife. His Big Knife was embossed with a green dragon and crescent moon. This type of Big Knife is now named after him, called Guan's Knife, or Guan Dao, and the weapon set and sometimes the Big Knife itself is called Green Dragon Crescent Moon Knife.

It requires good stances and courage to perform the Green Dragon Crescent Moon Knife well. Its characteristic techniques are chopping and sweeping which are used to bulldoze into an opponent's defence. The bulldozing, however, is not blatant, but is skillfully carried out with adequate coverage for own safety. It is not easy for an opponent to meet such attack.

These qualities are rewardingly transferred into our daily life. When we have good stances and courage as well as adequate coverage for our own safety, we can push through our plans and projects.

The Big Trident is one of the weapons forming our logo, the other being the Soft Whip. The weapon set we practice is called Taming Tiger Big Trident. Some people consider the Big Trident, with its massive weight, a clumsy weapon, but in the hands of a master its techniques can be very sophisticated and elegant.

The massive weight of the Big Trident is used to "tame" or control an opponent, and the three prongs of the Trident is effective in trapping an opponent's weapon. So, if you want to profitably throw your weight around or to control your adversaries, you can learn some tricks from the Taming Tiger Big Trident.

The Crescent Moon Spear is sometimes called the Lu Pu spear, named after the great warrior, also in the Three-Kingdom Period, who was never defeated in combat. It is a special spear with a crescent moon blade. The weapon set we practice in our school is called Traveling Dragon Crescent Moon Spear because the techniques of the spear resemble the movements of a traveling dragon.

The Traveling Dragon Crescent Moon Spear is a versatile weapon, incorporating the techniques of many weapons like the spear, the battle-axe, the hook, the dagger and the staff. Its characteristic techniques are thrusting, like an orthodox spear, and hooking, using the crescent-moon blade. "Bailing", i.e. sweeping upward from below, is also a formidable technique. A crescent-moon spear exponent is generally skilful and elegant.

The qualities derived from training the Traveling Dragon Crescent Moon Spear are very useful for scholar-warriors in business and profession, like managing directors and chief executive officers. They need to be fluent in many skills and strategies, and employ them in effective combination.

I remember Anthony Korahais telling me during a weapon course at the UK Summer Camp that course participants were at first at a loss of what to do when facing opponents with long or heavy weapons like spears and Big Knives. But after just half an hour understanding the philosophy and learning the skills and techniques, Anthony told me that he really pitied his opponent because capturing his weapon with the Southern Knives was a certainty.

Special features of the Southern Knives are short against long, and light against heavy. Their characteristic techniques are capturing and slicing.

Those who have practiced the Southern Knives can apply these qualities in our daily life. Even when you are overwhelmed against great odds, you may use the principles and techniques learnt in the Human-Character Southern Knives to capture and slice your opponents, which means control their initiative and take over their advantages. You must, of course, do so with noble intentions.