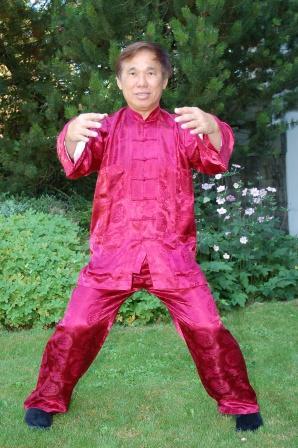 Is it OK for me to practice Three-Circle Stance or Golden Bridge?

Three-Circle Stance and Golden Bridge are powerful exercises to develop internal force, especially for martial art training. They belong to a class of chi kung exercises known as "zhan zhuang" which means stance training, and which focuses on building energy.

As your priority now is to overcome your health problems, these exercises are not suitable for you at present. Your focus should be on another class of chi kung exercise known as "dao yin", which literally means "leading and guiding" but which we figuratively translate as dynamic patterns. Dynamic patterns focus on circulating energy or chi flow.

It is a common mistake among many people, including some advanced practitioners, that building energy is superior to circulating energy, and that one becomes more advanced and powerful in chi kung by building more and more energy. This is not necessarily so. In fact, generally circulating energy is more important than building energy. If a person just builds energy and does not circulate the energy, it can become quite dangerous.

For those who are sick and weak, building a lot of energy, even when they practice the exercises correctly, is usually dangerous. The concept of yin-yang harmony is helpful to understand this. In this context, yin represents the physical body, and yang represents energy. When the physical body is sick or weak, adding more energy to the body aggrevates the yin-yang disharmony.

Some people, due to shallow understand, make this serious mistake. They are physically weak but think, erranously, that by taking energy-rich herbs like ginseng, injecting energy-stimulating drugs, or performing vigorous exercises, they can become strong. This is like putting a big, powerful engine on a small car.

Even for those who are healthy and strong, and are ready to add extra energy to their body, practicing zhan zhuang on their own poses some risks. Paradoxially because zhan zhuang exercises are simple, it is easy to practice them wrongly.

For example, there is only one form in Three-Circle Stance or Golden Bridge. A practitioner has to remain at this one form for a few minutes. If he makes just one mistake, he consolidates this mistake for his whole practice, which can lead to serious adverse effects. On the other hand, if he practices, say, a sequence of Taijiquan patterns, he performs many forms for a few minutes. If he makes one or two mistakes, the adverse effects can be compensated by the other forms he performs correctly.

Moreover, most people who practice zhan zhuang exercises do not know how to circulate energy. Energy, like cash, must be circulated to be ultized. Hence, even if they perform the form correctly, they may not have much benefit. Often they have adverse results. Their energy is not ultized but locked in their body as big muscles, which means their internal organs have to do more work to carry the extra mass. The locked energy also affect them psychologically, making them more easily tensed and agitated.

Out of genuine concern, we are quite vocal in emphasizing this point. We advice students to learn zhan zhuang from competent teachers. If we spend just a few minutes to examine the kungfu world today, it is obvious that zhan zhuang is little understood and poorly practiced. Alll kungfu masters in the past mentioned that zhan zhuang, or stance training, was very important, but most kungfu students today discard stances. Why? Because those amongst them who practice it did not derive any benefit. They did not practice correctly.

The above is taken from Question 8 March 2010 Part 1 of the Selection of Questions and Answers.