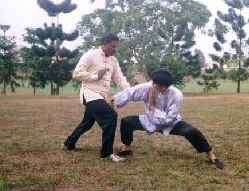 The only schools that teach any kind of martial art in my area teach non-traditional “Systems of Self Defense” built off of several unrelated arts. This is not to say they are not skilled at what they do, it's just not something I'm interested in.

You are right in your opinion. Even if this non-traditional system of self defence is effective, it is only the product of someone over a few years. Even if this person were a genius, his product would not be better than the crystalization of literally hundreds of masters over many centuries, which is the case with great kungfu styles like Shaolin and Taijiquan.

It is unlikely that this someone was a genius, or else he would not be so unwise as to imagine his invention superior to a legacy. It was more likely that he did not have an opportunity to be exposed to great kungfu, with the result that he attempted combining fighting techniques from different styles to make a style of his own.

Throughout the long history of kungfu, there has not been a single case where an invention by a single person has stood the test of time. All the numerous styles of kungfu extant today were evolved, not invented. In the English language, we may have heard of expressions like “Chen Harng invented Choy-Li-Futt Kungfu”, or “Yim Wing Chun invented Wing Chun Kungfu”. Strictly speaking the expressions are incorrect.

Chen Harng integrated the three related styles of kungfu he had learnt into one style, and Yim Wing Chun modified what she had learnt to suit her personal needs. What Chen Harng and Yim Wing Chun passed down to us were not their personal inventions but what these two great masters had themselves learned from their teachers, who in turn learned from their teachers. Hence, in the Chinese language, they are refered to as first patriarchs of their arts, and not as inventors or founders.

The nearest success story of a personal invention was Bruce Lee's Jeet Kwon Do. Although this style is effective for fighting, it too has not succeeded as an established style; not many people today practise it. Moreover, personally I do not consider it as a traditional kungfu style; it is, in my opinion, much closer to Taekwondo than to Wing Chun Kungfu.

The closest school that teaches anything at all near traditional Chinese arts is 100 miles away.

I have a strong interest in Shaolin Kung Fu, and want to ask someone who would know. Do you think, in my situation, it is a good idea to learn solely from books?

If you imagine you can be proficient in kungfu by learning solely from books, you certainly do not know what kungfu is. If you really want to learn traditional kungfu, spend some time and effort to seek a master. If you consider this too troublesome, yours is definitely not strong interest, but just a passing fancy.

The above is taken from Questions 8, 9 and 10 July 1999 Part 3 of the Selection of Questions and Answers.