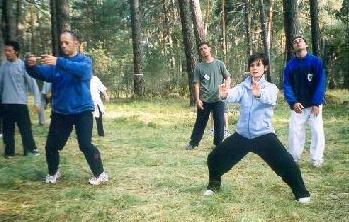 What are the major differences between Tai Chi and Kung Fu? They both seem to be “flowing” styles, they both have an emphasis on the internal art, and they are both used for combat. It is my understanding that Tai Chi is more of an internal art whereas Kung Fu is more external.

Your question can be answered in different ways. In the most basic way concerning the meaning of the two terms, “Tai Chi” and “Kung Fu” are very different. Tai Chi refers to “the cosmos”, whereas Kung Fu means “martial art”.

You are right to say that both are flowing styles, have an emphasis on the internal, and are used for combat. They are also used for health promotion and spiritual cultivation.

What I have written above are true only of genuine Tai Chi Chuan and genuine Shaolin Kungfu, which are quite rare nowadays. What is mostly practice as Tai Chi Chuan today is only external Tai Chi forms, which I refer to as Tai Chi dance. What is mostly practiced as Shaolin Kungfu today is external Shaolin forms without combat application, which I refer to as kungfu gymnastics, or Shaolin forms using other martial art techniques (especially Karate and Taekwondo) for sparring, which I call kungfu boxing.

If we mean Tai Chi dance, kungfu gymnastics or kungfu boxing when we say “Tai Chi” and “Kung Fu”, then neither emphasizes on the internal art nor are used for combat, though both can be “flowing”. Tai Chi dance is sofer, but not internal.

Are there any other significant differences? How do the modes of training compare? Are the techniques similar?

If we watch a typical performance of Tai Chi Chuan and Shaolin Kungfu in solo practice or sparring, we can readily see that some of the techniques are similar, and some are different. The “peng” technique in “Grasping Sparrow's Tail” and “Jade Girl Threads Shuttle” in Tai Chi Chuan are similar to “Beauty Looks at Mirror” and “Double Bows Tame Tiger” in Shaolin Kungfu.

The above is taken from Questions 7 and 8 Jan 2004 Part 1 of the Selection of Questions and Answers.