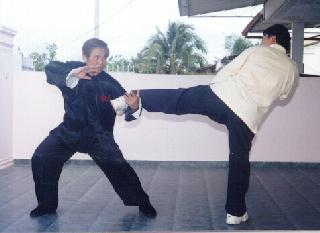 I have been training kungfu for about 10 years now and for the last 1-2 years I have stopped training like I used to, i.e. many punches and kicks, and many different techniques. Now I train only chi kung, like “Embracing the Tree”, Iron Body postures and different chi kung patterns such as “Lifting the Sky”, and “Nourishing Kidneys”.

In Chinese kungfu terms, for the previous 8 years you practised “chuan fa”, and now since the last 1-2 years you have been training “kung”. The term “kungfu” actually means “kung training”. There is a kungfu saying that “before you practise chuan fa you should train kungfu”. Here “chuan fa” means techniques, and “kungfu” means developing force and skills.

Hence, in the past before a student learned any kungfu patterns or sets, he spent some considerable time on stance training — especially the Horse-Ring Stance in Shaolin, and the Three-Circle Stance in Taijiquan. That was also how I started my kungfu training with three of my four masters, who were patriarchs in their respective styles. My fourth master was an exception, because in his characteristic kindness he treated me like an accomplished exponent instead of a student.

Nevertheless, one must realize that in the Chinese language, terms are usually used provisionally and for convenience, and not compartmentalized as in Western science. The terms “chuan fa” (or “quanfa” in Romanized spelling) and “kungfu” (“gongfu”) are often used interchangeably. The term “Taijiquan”, for example, is the shortened term for “Taiji Quanfa”, and it means “Taiji Kungfu”, and includes both practising techniques and training force.

This reminds us that whether you call your style of Chinese martial art “chuan fa” or “kungfu”, it should include both aspects, namely practising techniques and training force. In kungfu terminology, “force” constitutes the body, and “techniques” constitute the application, or “kung- yuong” in Chinese. If you focus on only one aspect and neglect the other, your training is incomplete.

“Chuan fa” refers not just to the techniques performed individually as patterns or collectively as sets, but their application in combat. The big trouble facing kungfu students today is that not only they do not train force, but also they do not apply their techniques in combat. They merely perform techniques for demonstration. This was what past masters referred to as “flowery fists and embroidery kicks”.

In all this training I have noticed that I have gained tremendous power for my kungfu. It is as if I have been doing modern weight lifting for 10 years, but nei kung is 1 million times better.

You are right. Force training in kungfu not only gives you tremendous power for combat but also enables you to do better literally anything in your daily life, including mental work. This is one of a few reasons why nei kung, which was the name in the past for chi kung, is superior to weight lifting and all other physical training.

More significantly, external power is, in kungfu terminology, "dead", whereas internal power is "alive". For example the power you get from weight lifting is only good for weight lifting, and not much useful for other things. In fact it is bad for your health because it draws away energy which should be used for life maintenance as well as overburdens vital organs. It also actually makes you less agile and more easily tired in combat.

On the other hand, internal power can be used for anything. It breaks through blockage to cure injuries or negative emotions if you have any. It nourishes your organs to make them strong. It flows to your mind to give you mental clarity. It improves your stamina so that you can spar, or work or play longer. It warms you when the weather is cold, and even refreshes you in hot weather!

The above is taken from Question 6 of Mar 2002 Part 1 of the Selection of Questions and Answers.