BE PROUD OF YOUR TRAINING 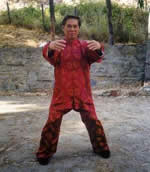 Be proud of your training of Tai Chi Chuan

I also wonder how am I going to continue to train internal force while serving in the army for two years. Exercise would surely mean Western styled exercise while “internal force” and “Tai Chi Chuan” would be nothing but jokes and weightless words said by those who do not understand the terms. No one would believe that one could be fit by training internal force. I really hope that I will not lose my efforts to train in Tai Chi Chuan by attending military service, for Tai Chi Chuan is truly a great treasure.

If you treat Tai Chi Chuan as a great treasure, which in fact it is, you should be proud of it. While you should not show off your Tai Chi Chuan to people, you need not worry about possible jokes and weightless words from those ignorant of it. Most probably this uneasiness is your own creation. It is more likely that other people admire your opportunity of practising a genunie art.

A few persons may pass unwelcomed comments. You can politely tell them that genuine Tai Chi Chuan is a great art that is not easily found today, and that your only concern is whether you are worthy enough to practise it. It is helpful to realize that when a person feels shameful about doing a certain thing, it is usually either his action is unworthy or he is unworthy of the action.

But when those persons find that your internal force training not only gives you health and vitality but also a cheerful spirit and a relaxed mind, even they will admire you, not just for your art but also for your courage of pursuing what you think is worthy. The point is not what other people may or may not believe; but that you will certainly be fit and healthy when you train internal force. And they will be amazed that even when you train western-typed exercise less than them, with your internal force you are better than them in their push-ups or weight-lifting.

I recall a priceless lesson I learned from my father. During school days, I was a boy scout. Sometmes when we had to attend scout meetings wearing our scout uniforms, we would bring our uniforms to school to change. One day my father asked me, “Are you not proud to be a scout? If you are not, you should leave scouting; if you are, you should not be afraid other people know you are a scout.” Since then I always wore my scout uniform when needed, and was very proud of it.

Irrespective of whether at home in Malaysia or abroad, whenever I attend any kungfu or chi kung activities, I always wear my kungfu or chi kung dress — never take the dress to the place to change. When I am invited to international conferences, I usually wear my traditional dress. I am so used to it that I often forget about it until some people kindly comment how attractive my traditional dress is.

It is the same with your Tai Chi Chuan or whatever art you are proud to be training in. Before long, other people will compliment you on how good your art is.

The above is taken from Question 8 of May 2000 Part 3 of the Selection of Questions and Answers.