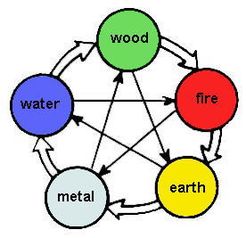 Do you have any information or know where I could get information on the different elements and what emotions are represented by each element?

“Five Elements” is a wrong translation made by early European writers of the Chinese philosophical concept of “Wu Xing” due to their insufficient understanding of the Chinese concept, but the English term has become established and almost everyone today uses it without realizing the mistake.

In the Chinese language, the “Four Elements” in Indian philosophy are called “xi da”, which means “four greats”; and the mis-translated “Five Elements” in Chinese philosophy are called “wu xing”, which means “five movements”. Thus, there is no confusion in the Chinese language as two different terms — “da” and “xing” — are used. Confusion arises in the English language when the same term “element” is used for two different concepts, “da” (great) and “xing” (movement).

In an attempt to help clarify the confusion, I have used the term “Five Elemental Processes” instead of “Five Elements” for the philosophical concept of “wu xing”. I would prefer “Five Processes”, which is both literally and figuratively closer to “wu xing”, but I retain the word “Elemental” to maintain the link with the common term “Five Elements” although it is wrongly translated.

You can find mention of “wu xing” in many books on Chinese philosophy, Chinese medicine, kungfu, feng shui (the Chinese art of environmental energy) and Taoism, but as far as I know all these books in English use the term “Five Elements”. Also, not a single of them explains the philosophical concept of “wu xing”; at the most, some of these books merely repeat the trite description that “metal destroys wood”, “wood destroys earth” and so on, which is actually not saying anything. I can safely say that the authors themselves do not understand the real meaning of “wu xing”; they also do not know what is actually meant by “metal destroys wood”, etc.

In the field of emotions, grief is symbolized by “metal”, fear by “water”, anger by “wood”, joy by “fire”, and worry by “earth”. If you are sad or depressed, you can overcome your emotional problem by becoming happy. This is “fire destroys metal”. How you may implement the principle of “fire destroys metal” will depend on your skill or the skill of your doctor. As the heart corresponds to “fire”, one excellent way is to practise chi kung to open your heart. In fact the term “kai xin”, which literally means “open heart”, is the Chinese term for being happy.

The above is taken from Question 6 of January 2002 Part 3 of the Selection of Questions and Answers.