INSPIRATIONS AND CLASSICS FOR TAIJIQUAN 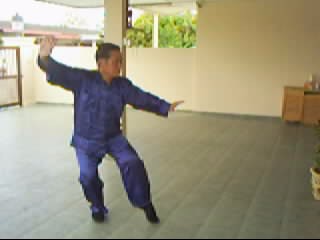 Wahnam Taijiquan evolved quite naturally. I was very interested in Taijiquan even before I learned from my second kungfu master, Sifu Chee Kim Thong. But I could not find a good Taijiquan master.

However, after having learned from my third kungfu master, Sifu Ho Fatt Nam, I had some good understanding and experience of energy flow and internal force as well as combat application. I jogged to a park every morning to practice Shaolin Kungfu. There, an elderly gentleman practiced Yang Style Taijiquan every morning too. His Taijiquan performance was the most impressive I had ever seen.

One morning I approached this gentleman and politely asked whether he could teach me Taijiquan, and, if he liked, I could show him some combat application. The gentleman declined, saying that my Shaolin Kungfu was hard, and any hardness would spoil his Taijiquan.

This put me off. All at once I knew that his was only Taiji dance, beautiful to watch it might be, and he was unaware that all great kungfu, including Taijiquan, had both hard and soft aspects. As I could not find a good Taijiquan teacher, I decided to learn Taijquan by myself.

I bought whatever Taijiquan books I could. Two of these were most influential and both were in Chinese. One was “Taiji Fist, Knife, Sword and Staff” by Chen Gong, a disciple or grand disciple of Yang Deng Fu. The other was a very small volume entitled just “Taijiquan”, written by the great Yang Style master, Yang Deng Fu, himself.

This small book of only 46 pages formed the source of Wahnam Taijiquan, though most people, including many Taiji practitioners, may regard this small book as insignificant. The bulk of the book consists of explaining the forms and applications of the Yang Style 108-Pattern Set, with about 5 pages of introduction and 8 pages of conclusion.

Many people would just read over the introduction and conclusion, but I find them a treasure house for Taijiquan. It is understandable if one doubts how much 5 pages of introduction and 8 pages of conclusion can reveal. It is of great help to know that Chinese is a very concise language where just one phrase may tell what it may need a few paragraphs to explain in English — if one has the background knowledge.

Take for example the following phrases mentioned in the introduction. “Regarding internal, use intention, not strength. Down means chi sinks to dan tian, Up means void, spiritual, upright, forceful.” Even if one knows the dictionary meaning of these words, he would not understand what they actually mean if he does not have direct experience of what the phrases describe.

These ten points are described in just two pages, but they form the core of Taijiquan. Because of my previous training in Shaolin Kungfu, these few pages give me an insight to profound Taijiquan secrets. Like generations of kungfu masters before him, Yang Deng Fu hid great secrets in the open.

Indeed, Yang Deng Fu gave a clear clue right in the first paragraph of his introduction. He said that Taijiquan is profound. It is unlike Western sports where an overt explanation can reveal everything. But in Taijiquan you have to go deep to get the treasure.

And this great master revealed further secrets hidden in the open in the conclusion of this tiny book. There are 5 pages with illustrations on Pushing Hands and Striking Hands, which many people without direct experience would not understand by merely reading the text and looking at the pictures.

This is followed by just three pages of “Taijiquan Philosophy”, which record the essence of great masters' teaching. They include “Wang Zong Yue's Thesis of Taijiquan”, “Insight into Training of Thirteen Techniques”, “Song of Thirteen Techniques”, and “Song of Combat”. It is incredible that some of the greatest of Taijiquan teachings are found in just these three pages.

But the uninitiated, even though he may have practiced Taiji external forms for decades, may not know what he reads. Take for an example the first lines of Wang Zhong Yue's famous thesis:

These lines are just empty words to most people, but they concisely describe the essence of Taijiquan at many levels. If you wish to understand these secrets and enjoy the wonderful benefits of Taijiquan as an internal martial art, besides diligent practice, taking part in discussions like those initiated by Sifu Joko, like Chinese New Year's Gift: Secret of Footwork and Why is Taijiquan performed slowly? is very beneficial.

Years later, when I first taught packaged courses (in contrast to regular classes) of Shaolin Cosmos Chi Kung to the public, some of my students were Taiji instructors. They were amazed at the energy flow and internal force they attained from my chi kung.

They asked me to teach them some Taijiquan. I taught them “Lifting Water” to generate energy flow and develop internal force, and some combat applications of the patterns they practiced.

Although my students were very happy with the results, I only taught Taijiquan informally at first. I believe a good teacher should teach his best, and my best was Shaolin Kungfu.

Sifu Javier of Spain was the first to take a formal Intensive Taijiquan Course from me. Later Sifu Rama of the Blue Mountain successfully persuaded me to teach Taijiquan formally. I found his reasons that although my best was Shaolin Kungfu, my Taijiquan teaching was better than most Taiji teachers, and for many people Taijiquan was more suitable than Shaolin Kungfu, were reasonable and valid.

In my initial Taijiquan teaching, I used the 24-Pattern Simplified Set as a base. Although this set was invented by a council of Taijiquan masters in China as part of Wushu for sports, I found it very useful for our purpose of practicing Taijiquan as an internal martial art.

As students progressed, we have to use a more advanced set. At this time Chen Style Taijiquan, which resembles more of Shaolin Kungfu than Yang Style Taijiquan, became popular, though most Chen Style practitioners practice it for sports rather than as an internal martial art. I chose the Chen Style fundamental set, made some changes to suit our particular needs, and used it as our basic set for our advanced Taijiquan students. Hence, much of the inspiration in our Taijiquan came from Chen Style.

Soon there were much adverse criticism on our Taijiquan, accusing us of not having a proper Taijiquan lineage, although we had been very open regarding how our Taijiquan came about and we never claimed any well known Taijiquan masters to be our lineage predecessors. Sifu Javier first suggested that we used the term “Wahnam Taijiquan”, and Sifu Jeffrey of Australia formally proposed it. Zhang Wuji in our Discussion Forum rightly said that by adopting this term “Wahnam Taijiquan”, we took responsibility for our own development.