WHY IS KUNGFU SUPERIOR TO OTHER MARTIAL ARTS? 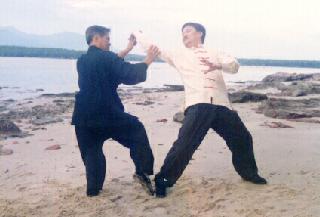 Kungfu is superior to other martial arts

I have read many of your Shaolin books and they have helped me immensely. I was lucky to study the Northern Style with a good master. But I had to move to another area where there are no Northern Style masters but mostly Tae Kwon Do and Aikido “masters” who were very disdainful of my training. Of course, it was oblivious to me that their students did not possess the power of my classmates of the same experience level.

But over the years, having personally enjoyed the wonderful benefits of Shaolin Kungfu and Taijiquan, I have begun to feel that there is much truth in his statement. Of course, non-Chinese martial art masters would believe differently, though a substantial number of them, especially the higher-ranking ones, do admit the superiority of Chinese martial arts or kungfu.

By comparison, kungfu techniques are profound. For example, instead of a straight-forward punch for sundry occasions, depending on different needs and situations, a kungfu exponent could use a phoenix-eye fist, a leopard punch, a crane-beak, a tiger-claw, a dragon-form, a snake-thrust, a sword-finger, or a Zen-finger.

The techniques of these other arts are such that women are at a gross disadvantage when compared to men. For example, it is harder for a woman to block a powerful kick, or to throw a heavy opponent. But she would not have this innate disadvantage in kungfu because the techniques are profound.

For example a woman practising Northern Shaolin could hook a powerful kick, or one practising Taijiquan could fell a heavy opponent as easily as her male counterpart. And unlike in the other martial arts where executing throws and locks would be impracticable if not for their safety rules, in kungfu the exponent ensures that his opponent could not punch or kick him before he executes a throw or lock.

On the other hand, true kungfu masters never feel disdainful of the other martial arts. If anything, they feel pitiful. Personally I feel pitiful that instead of bringing them good health and inner peace, their many years of dedicated training brought to many masters of the non-Chinese styles internal injuries and bottled up aggressive feelings. On a personal note, I am glad and proud that I have helped many such masters and a few grandmasters overcome pain and internal injuries which they had sustained as a result of their long training, and also have helped them find inner peace.